Today I dragged Jed around with me to Walgreens and the post office and Paper Source and Scratch ‘n Sniff, and while he kind of collapsed at the last one (he’s not used to marathon holiday shopping sessions, poor thing) and had to step outside into the quiet fresh air for a bit, I think I may be actually DONE with holiday shopping.

We do stockings for everyone here, a tradition inherited from Kevin’s family, and we also sit around in a circle on Christmas morning, after coffee / fruit, and before brunch, and open them one by one, making sure in advance that everyone has the same number of them, plus an orange in the toe, and a candy cane hanging on the stocking.

I do *not* do my own stocking, unlike Kevin’s mother. The men are responsible for mine right now, and contribute to the other stockings, though I do manage the count and do the bulk of the shopping (which I find mostly fun). Soon the kids will be helping with stockings too. (Stocking gifts are from Santa, so it’s the last tiny vestige of pretend magic here. They can have another year or two of that.)

Everyone this year is me, Kevin, Kavi, Anand and Jed, plus Kat and her kids, plus a few little things for the dog and cats, so it’s many small gifts. Everyone gets some food treats and most people get socks; the rest are a bit more individualized. Slinkies have been big in the past. (The adults get their stockings filled out with post-its and pens and other such useful items.) So it’s kind of a lot, but also delightful; it’s one of my favorite Christmas traditions.

Next step, of course, is the wrapping. I’m thinking I may simplify / greenify wrapping this year by cutting up a bunch of cotton fabric into squares (I have plenty of scraps in the fabric bins) and encouraging wrappers to use either rubber bands or knotting as a fastener. And then save all of those squares to re-use in future years. Tiny steps towards sustainability, and honestly, it’s probably easier too! It won’t be as beautiful as the traditional Japanese knotted fabrics used for such things (furoshiki), but it will be functional, at least.

The real accomplishment of the day was the post office, though. I think I have now officially mailed out EVERY SINGLE Kickstarter thing I had to mail out physically, EXCEPT FOR ONE PERSON WHO DIDN’T GIVE US HER ADDRESS (Sophie, this is you, if you’re seeing this, because all of our e-mails to you have failed to reach you). The dining table is clear of Kickstarter items, and tomorrow, we’ll be cutting out snowflakes there instead, which will be a nice change!

Physical fulfillment of a Kickstarter with well over four hundred orders is just a wee bit time-consuming, it turns out. Especially when they are exceedingly varied, so it’s not just tossing the same book into the same envelope over and over again.

🙂 Thanks to Stephanie, though, and her meticulous tracking, we have had almost no errors in the process, which is frankly kind of astonishing. 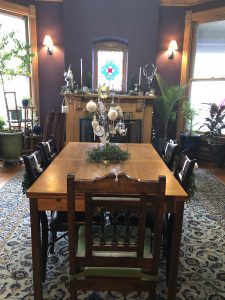