The primary SF I’m writing at the moment is in my Jump Space universe.  It encompasses the following (all free to read, except for The Stars Change), ideally read in this order:

More stories will likely be forthcoming, along with hopefully a novel or two. 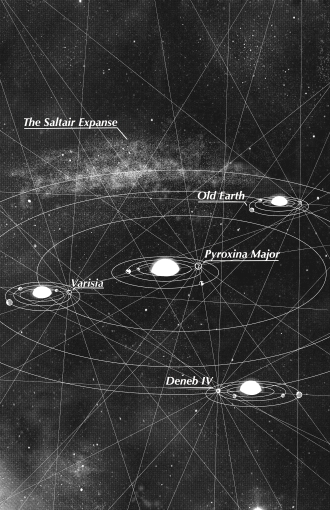 “Like the sweet heat of a palate-pleasing curry or the brilliant radiance of bougainvillea, the short stories in Mary Anne Mohanraj’s Bodies in Motion will delight the senses and sensibilities. Her tales follow two generations of two families living on the cusp of disparate worlds, America and Sri Lanka — their lives and ties shaped, strengthened, devastated, and altered by the emigrant-immigrant ebb and flow. Through stunning, effervescent prose, intimate moments are beautifully distilled, revealing the tug-of-war between generations and gender in stories sensual and honest, chronicling love, ambition, and the spiritual and sexual quests of mothers and daughters, fathers and sons.”

“In a far away land under the coconut palms, there was a quiet little house by the sea. It had old boards that creaked when the wind whistled through them. It had small rooms that filled with sunshine on sunny days and moonlight on cloudless nights. Sometimes the roof leaked a little rain. And it had a young poet…” This charming tale, written by Amirthi Mohanraj and illustrated by Kat Beyer, is the story of a young poet who sets out on a journey to find poetry. With the guidance of two ravens, the help of a few magical creatures, and a strong dose of determination, the young poet adventures in the wide world, finding more than she ever expected.” 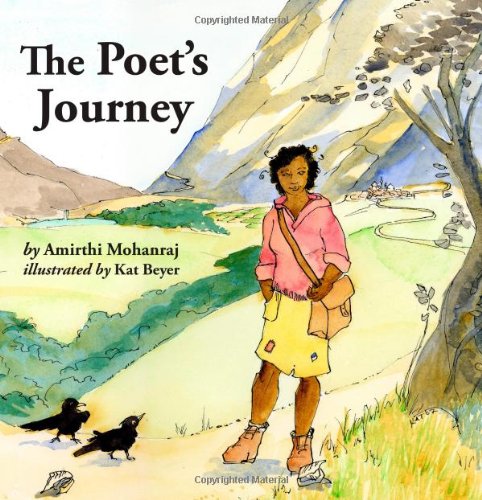 Birthstones,  2013
“Suresh sat across the kitchen table from the slender woman, sharing a last evening cup of tea, surprised yet again by how lovely Priyanka had become over the years.  When he’d first met her, she’d been a scrawny gamin of a child; now his cousin Priyanka was as gorgeous as the Bollywood film stars she revered, with large, wide-set eyes, high cheekbones, perfect skin.  She could have been an actress if her parents hadn’t been dead set against it.  Throughout her childhood, they had kept her under strict lock and key, and now, everything had changed.  “I don’t know how you stand it,” he said.””

The Princess in the Forest, 2012 (Bodies in Motion)
“The princess walks for hours, her face smooth as an undisturbed pool of water, her eyes laughing, light as butterflies. New-married, full of adoration for her husband, her prince. Rama hunts in the forest; he pursues the slender hart, lays traps for cunning rabbits. But always he comes to his Sita before the sun is down, comes to their modest hut, their gentle home in exile. He smiles to see her, lays the game aside and takes her in his arms, draws her down to the forest floor, the soft grasses, and she loves him then, as the gopis loved blue Krishna, she loves him with everything she has, everything she is.”

Sanctuary, 2012
“”Kavitha eased her way out of her daughter’s room, closing the door quietly behind her. It had taken longer than usual to get her toddler down; Isai had insisted on telling her a long, incomprehensible story about Daddy and dragons. When Michael got home from the station, Kavitha would have to ask him if he’d said something to Isai. In Jokertown, it was entirely plausible that Michael had encountered real dragons in the course of his detective duties — or at least something close enough to pass for real. He was going to have to stop reading his daughter police reports; Isai was getting old enough to understand them. And even though the child appeared to be fearless, some of the things Michael dealt with on a day-to-day basis terrified even Kavitha; Isai didn’t need to hear all the gritty details of Daddy’s job. Not yet. Isai might be an ace, with fearsome shapeshifting abilities, but she was also only two-and-a-half years old. Michael was just going to have to learn how to make stories up. Appropriate stories.”

Hunting for Mangoes, 2011 (Children’s)
“In the long, lazy afternoon, under the shade of a wide-leafed coconut palm, a brother and sister were quarreling. This was nothing new; Arun and Ziya had been born in the same moment, under the same star. Their exhausted mother would tell anyone who asked that they had been fighting ever since that day.”

Sequins, 2008 (Bodies in Motion)
“Sarala blinked twice from behind her glasses, jarred from the image she’d held in her mind, the image that stubbornly refused to come out into the paint on her canvas. There was a body, she knew — a body, and wings — but more than that. Not as trite as a woman turning into a bird, seeking flight, freedom, escape. Along with the wings were powerful haunches, poised to leap, muscles tense and yearning. And claws, sharp and long; teeth, red at the tips. All caught at the moment of shifting, transformation, in that liminal space where every possibility hangs, glorious, waiting.”

Counting to Ten, 2006
“Why is it that when your own life is totally fucked up that you try to fix other peoples lives?” “I don’t know.  You’re the big sister, you’re supposed to know the answers to these things.”  “I don’t know anything.  That’s about all I know.”

The Marrying Kind, 2005 (Bodies in Motion)
Leilani slipped out of bed, pulled on a thin cotton robe, left Jared sleeping. It was late, and they both had to get up early tomorrow for work. But she couldn’t sleep on a night like tonight — it was thunderstorm weather, and they were overdue. The forecasters had been predicting a storm for weeks, but there had been nothing, nothing but the crackle in the air, the build-up that never quite discharged. It was driving her slowly mad.

Sins of the Father, 2005 (Bodies in Motion)
Villa’s hand shakes like an old man’s as he crouches naked in the dark room, a tin bowl of water before him, a thin washcloth in his hand.  It is miserably hot, the worst of the Jaffna summer heat, and he knows that by the time he walks from his house to where the Tigers are encamped, he will be drenched in sweat.  Still, he must do what he can, and so Villa dips the cloth into cool well water, passes it over his thin body.  He has always been thin, but the deprivations of the recent troubles have left him emaciated, his bones poking out, sharp against loose skin.  He rubs the skin fiercely, to compensate for the lack of soap, to compensate for all that has happened — rubs until his skin feels scraped raw, flushed and swollen.  When the cloth goes dry, he reaches for more water, and overbalances, falling sharply onto one bony knee, unable to catch himself with only one good arm.  The other hangs limp at his side, useless since the bullet caught it.  He resents it, and at the same time is grateful to it.  Its obvious uselessness is all that saved his life the last time the army came through.

Oceans Bright and Wide, 2005 (Bodies in Motion)
Selvan stood just outside the convent gates, waiting for Sister Catherine to come and meet him.  Bougainvillea spilled over the walls, lush and crimson; he was briefly tempted to break off a small sprig to present to her.  He knew it was her favorite plant, the brilliantly-hued paper-thin leaves hiding their tiny white flowers.  But any flowers he broke off would only wither and die; better to leave them growing on the vine, surrounded by their own kind, beautiful in their profusion.  Selvan watched the young girls instead, demure pairs walking in their crisp white school uniforms across the wide lawns; he heard the young nuns giving strict instructions to their charges.

Lakshmi’s Diary, 2004 (Bodies in Motion)
July 2, 1969 — My wedding day. Today I’m getting married. Raksha is a handsome man — smooth skin, nice cheekbones. He’s cheerful, generous, and owns his own business, a sari shop. Aunty Easwari has done well by me, though I thought she was going to have a heart attack when I wrote to her and asked her to find me a husband. She protested — of course my parents, both teachers, would object to my getting married instead of going to college, but I can be just as stubborn as any of my five sisters when I need to be.

A Gentle Man, 2003 (Bodies in Motion)
Suneel wakes up hours before his family. This is normal, although today is not normal, today is a special day. Most days he makes tea, reads the paper, eats some toast without butter before going to work at his store. Sushila, his wife, never wakes until after nine. She likes to stay up late, talking on the phone with her friends. When the children were younger, he was the one who woke them, who ironed their Catholic school uniforms and put out milk and cereal. But now the children are able to wake themselves, and only Riddhi, his youngest, still sleeps at home. It is Riddhi’s birthday today…

Minal in the Winter, 1999 (Bodies in Motion)
“Dear Raji Aunty, I hope you and Vivek Uncle are well. How is the painting going? The painting you sent on my birthday — of the women bathing at the waterfall — hangs over my bed. I think my mother would be shocked, but my roommates are very impressed that I have an aunt who paints such things. The women in their bright saris remind me of home…” All my letters to my aunt start like that, and never finish. I have written twenty or thirty of them in the last week. Words and lines and paragraphs of politeness, all true and all lies. I cannot write what I am really saying. I cannot write that I am in terrible trouble, and I don’t know what to do…

Seven Cups of Water, 1999 (Bodies in Motion)
My brother’s wedding day. The feasting lasted long past dark, and I went to bed exhausted. I first peeled off my sweat-soaked sari, rinsing my body with cool well water before changing into the white sari I wore to sleep. The old women had consulted the horoscopes of my brother and his young bride, had pronounced that this day, in this month, would be luckiest, in fact the only day that would not bring down a thousand curses on the young couple — never mind that it was also one of the hottest days of the year. There was no flesh left on the old women’s bones, nothing that could drip sweat; I am sure they enjoyed making the young ones miserable…

Season of Marriage, 1994 (Bodies in Motion)
“She was scared. Why, oh why had she agreed to this? The answer to that was easy. Because she hadn’t cared anymore. After she’d found out about Jim and that other girl; after all the broken promises and shattered dreams, it just didn’t seem to matter. The heat and incense combined to bring on a wave of brutally clear memory.”