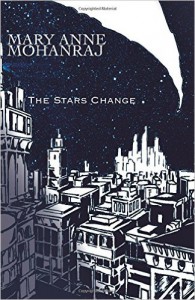 In October 2011, I ran a Kickstarter to fund a new book of science fiction; in March 2013, the completed book was picked up by Circlet Press, and is now available online, in e-book, paperback, hardcover, and audiobook.  The Stars Change, a novella told in interconnected stories, is set in the same universe as my story “Jump Space.”  Illustrated by Jack Kotz.

Here’s the opening story from the book, “The Night Air.”

Book Description:
On a South Asian-settled university planet, tensions are rising. The first interstellar war has just been declared; the pure humans (or at least a segment of them) against the genetically modified humods and the aliens. The players in this 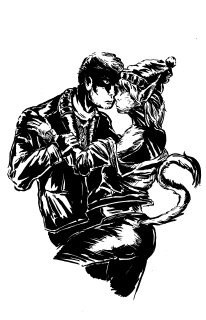 game are complex, and the average citizen doesn’t really understand what’s going on. They just want to go on with their life: go to work, go home, make love to their wife. Or wives. Or husbands. Or indeterminate gender human and/or alien partners. Yet when the Warren, the alien ghetto, comes under attack, humans, humods, and aliens must all decide where they stand — what is worth fighting for, or maybe even worth dying for.

A video of me at Tuesday Funk, reading “The Night Air.”