When I first floated the idea for our anniversary party, the main thing Kevin requested was that I not make him give a speech. I agreed, as long as he would stand next to me while I gave the speech. I kind of love giving speeches. (I just had to turn down an opportunity to give a speech because it conflicted with another thing, and I am sad.) In the end, though, I sort of failed to actually give a speech — I started writing one a few weeks earlier, but then the end of semester happened, and then I got a little obsessed with cake-baking instead.

So mostly I ended up inarticulately thanking people, and trying to acknowledge all the different eras of our life that were represented: family, high school, college, grad school, Bay Area, science fiction, Chicago, Oak Park — and I still managed to leave out a few people who didn’t quite fit into any of those categories. Eep. This is why you write the speech, people.

But it was still so great, standing up there, looking out at the crowd, with Kevin laughing beside me. I’m not sure what I said that was so funny, but he, and the rest of the crowd, were indulgent of me. 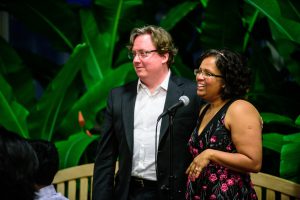 The speech I started writing was actually sort of oddly dark. It started with a note someone sent me after I’d been diagnosed with cancer and announced it on Facebook. She wasn’t anyone I knew well. And she apologized, because she knew it sounded awful, but when she’d heard about my diagnosis, she’d had a moment of…something. I can’t remember now exactly what she said — not that she was happy, exactly, that I had cancer. But she’d been jealous, she’d thought everything in my life was easy and perfect, and this made her realize that it wasn’t.

Now, I’ve told this story to a few people, and they usually get kind of angry at this woman, but really, I don’t need you to pile on her. When you get cancer, it’s hard for some people to realize that maybe they should refrain from dumping their emotional responses on you (see also circle theory: comfort in, dump out). She didn’t upset me with her comment, and in fact, I could understand how she’d gotten that impression, that my life was easy and perfect.

Facebook is famously misleading that way, of course — people tend to post the pretty pictures, not the messes and disasters. And even for those of us who try to represent the rest of life too, there’s a lot of life that’s just tedious. I did laundry today. I did laundry yesterday. I’ll probably do laundry tomorrow, and dishes too, and pick up dog poop, and none of that will I bother to blog.

You’ll just have to trust me that my life isn’t a non-stop thrill ride of strolling in the garden and cooking fabulous meals. Sometimes it’s pretty rough, and some of the roughest parts I can’t talk about at all, because they’re mostly other peoples’ stories, even if they also affect me. Maybe someday, if they give me permission, but in the meantime, it’d be good if we all tried to remember what a rosy lens Facebook generally offers.

But that said — I can also understand why this woman felt jealous of my life as represented on Facebook. Because, in fact, I have been lucky, and blessed — I’m not religious, but that feels like the right word. Grace is that thing that you haven’t earned, that is granted to you by the gods or the universe or who knows what — and I have been graced with more blessings than I can count. Most of all, by tremendous friends and family, who have held me up through some very hard times. And all I can do in return is try to return the favor, to pass it forward, as best I can.

So to the people in that room, but also to the people here, reading these words now, I’d like to take this moment to say thank you, for holding me up over the last twenty-five or so years. I hope I get the chance to return the favor some day. 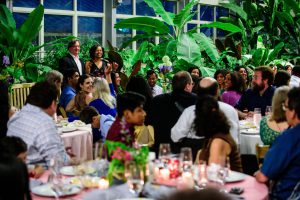