I used to do this thing. For the first several years of the relationship, when it seemed like I cared a lot more than Kev did, when it seemed like we wanted very different things from life, and we’d never find a way to reconcile them. I’d get insecure, and then upset, and then spend a while working myself into a proper state.

And Kev would be there, in the room or on the phone, and I’d be trying to get something out of him that he wasn’t able to give me, some grand declaration of love or some promise that in fact he actually wanted exactly what I wanted and there would be no problems ever, and I’d get incredibly upset. Crying with abandon, boxes of tissues, giving myself a headache and swollen eyes the next day kind of upset.

All my girlfriends at the time would tell me that I should just break up with him — they told me that over and over again. Not that he was a bad guy, but that he clearly wasn’t going to give me what I wanted from him, and I should cut my losses and move on. And I tried that — we broke up four times. We lived in different states; we even, during the worst, longest break-up, stopped talking for months, because it hurt too much to talk to each other.

But I couldn’t walk away, in the end. I kept coming back to Kev, and in the end, we found a way through.

I can point to a turning point. We were about a dozen years into the relationship, I think, and I had started getting really upset again, and instead of spiraling down into hours of fighting and crying, I said I was going to take a break. I left the bedroom, came out to the library and grabbed a book, something I’d read a dozen times before, comfort reading. Probably something by Bujold.

I read a chapter or so, and calmed down, and by the time I put it down and went back in, I was ready to talk reasonably again. There were a few times after that when I got upset, or even angry, but basically, for the last dozen years or so, I haven’t ended up in a flood of tears again. That pattern just….stopped, and I think it had more to do with me than with anything Kevin did. I hadn’t been fighting in any kind of useful way; I’d just gotten into a bad habit of miserable emotionality. I was even, I think, a little addicted to the intensity of it all, the big fight, and the eventual making-up.

I asked Kevin last night why he thought we’d made it through twenty-five years — made it through happily. I want to be careful not to set up staying together as some sort of be-all and end-all goal; sometimes the right thing to do is walk away. But assuming there isn’t some major reason why you shouldn’t be with this person…

He said it was because we didn’t disagree on anything big, and when we do disagree, we don’t tend to let it escalate. Which is connected to what I’d say, which is that we are in sync on the major things to begin with, and on the rest of it, we’ve learned how to fight better, how to argue it out. We don’t let ourselves get into mental states where resentments are building, and every little thing they do wrong gets added onto the pile of why they’re a terrible person, or why they don’t really love you.

We’ve learned how to short-circuit that negative cycle. So if Kev does something that pisses me off, which he does, I first give it a little time to see if it’s actually something worth fighting about. Sometimes that sharp poking thing is just like a prick from a thorn — hurts in the moment, eases off pretty fast, soon forgotten. But sometimes it’s more like a stone in your shoe, and it just keeps bugging you and bugging you, and eventually, you’d better deal with it, or you’re going to have bigger problems.

It’s no fun, walking around being mad at the person you love. And it takes a little effort of will to start the difficult conversation, but over time, you can build up positive feedback patterns in your own mind, a little voice that will reassure you that whatever is hurting, it will stop hurting faster if you just talk about it. So you suck it up, set aside some time, talk it through. And each time you succeed in talking through a problem, it gets a little easier. Iterate. Fail better. Layers of trust, built on a foundation of respect and willingness to say, this is a priority, this is worth fighting to fix.

That’s what I have for you, what’s gotten us through twenty-five years, to a place where all I want is to find ways to spend more time with him, in the midst of life’s busyness. Fight when you need to, but fight better. There’s a lot of laughter and a lot of joy, on this side of all those tears. 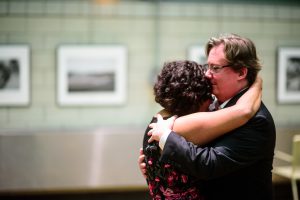