On the bus, heading to D.C. I ended up re-doing my poster at the last minute, because the ones I had done were fierce, but somehow, not the message that felt right for me. This is an idea I’m noodling with, and I’d like to develop it further after the march — I think it’d make a good garden flag, something people in my neighborhood might actually want to have fluttering among their flowers. Maybe with the vines actually made of words, rather than the words just lying over the vines. And more leaves, flowers, animals? But this is a decent first stab. 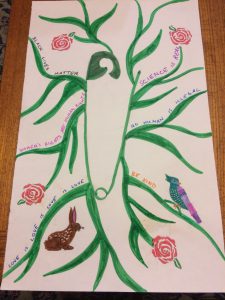