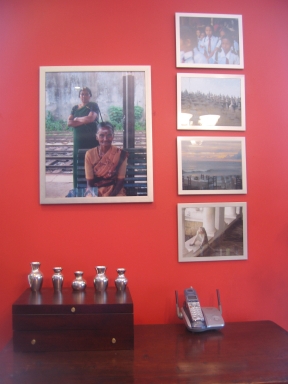 It's a Sri Lankan tradition (and I imagine a tradition in a lot of other places :-), to start the year clean and fresh. So you're supposed to wear new clothes, clean your house the night before, that sort of thing. There have been years where I've actually managed to do that, but this year, not so much. We do have new clothes for Kavi (because she has so many new clothes :-), but that's about it. The house is so not clean -- you can't walk through the upstairs without tripping over a half-open suitcase, big plastic storage boxes, strewn laundry, random electronics...sigh. I had hoped to at least be unpacked by today, but while baby's stuff is put away, Kevin's is only half done, and I haven't even started on mine. But still, I felt the need to at least attempt to honor the tradition. So I straightened up the downstairs -- just one sinkful of dishes left and a floor to sweep, which hopefully I'll have done by lunchtime, if Kavya cooperates. And I polished the silver.

Now, it seems a little ridiculous to spend fifteen minutes polishing the silver, especially when we're talking about five little silver-plated vases that just sit out and tarnish most of the year. I probably won't even use them for months, not until spring, when we have herbs and little flowers from the windowboxes to bring inside. But it's awfully satisfying to have it done, to see them gleaming on top of the china cabinet, perched on the silver chest. It's a small, occasional cleaning project that makes the world a little prettier, a blow against the encroachment of entropy, if you will. :-) So there's my contribution to the New Year clean house tradition. Happy New Year!

If you were going to spend 15-30 cleaning something you don't normally clean in your house, what would it be?