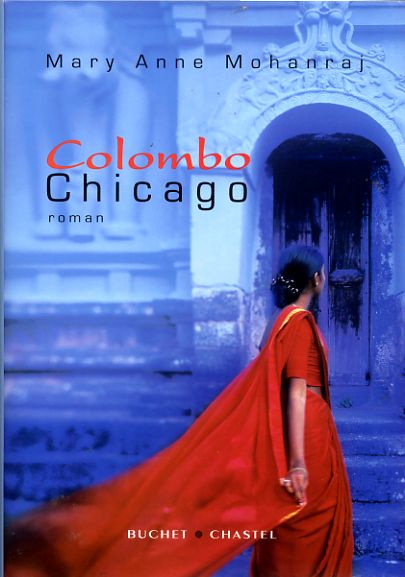 I just received the French edition of Bodies in Motion, which they've retitled Colombo Chicago. As my friend Nikhil says, 'Perhaps Chicago is exotic to the French.' In any case, the book is gorgeous -- perhaps the prettiest one so far, though I say that with a pang of guilt for not sticking by the HC pb, which is awful purty too.

In my trawls across the internet for a cover, I ran across the following (note that the first reviewer prefers my title :-):

A translated summary from a bookseller (I think):

Colombo - Chicago is a contemporary romantic fresco over sixty-three years (1939-2002) of the history of Ceylon (called Sri Lanka later) and of the United States. It is built in a series of twenty tables entitled and interlaced to which the characters enter and leave scene, all dependent by relationships, alliances and love affairs. But all these tables form only one fiction enracine in the genealogy of two families, Kandiah and Vallipuram, on two generations, bottom of civil war between the communities tamoule and Singhalese. Some of the members of these families emigrate in England or in the United States to make their studies in Oxford, Harvard or at the University of Chicago. Some marry White, some marry other immigrants sri lankais, some return in Colombo for an arranged marriage.

Sri Lanka, visions of a country Modernity, uprooting, emigration, integration, return to the country, central role of the woman, her sensuality, its professional successes are in the middle of this novel intimist on Sri Lanka, a country forged by centuries of tradition, corroded by years of civil war, confronted with the occidentalization and the modernization of its social habits.

At the beginning
For its first novel, Mary Anne Mohanraj launched out in a family fresco, between his country of origin and the United States where it saw.

Hebdo books - J. - C.P. (May 5, 2006)
One loses oneself a little, sometimes, in the middle of all these stories. But the talent of Mary Anne Mohanraj, her virtuosity, its obstinacy to be concluded its business early made give us in the wire of an account that its title of origin, Bodies in motion (Body moving), defines and is useful much better than the pale one, fragmentary and distorted Colombo - Chicago.

And here's another lovely review -- I'm not sure the Google translation below is even close, but it sounds positive. :-)

In this first very successful novel, Sri Lankaise Mary Anne Mohanraj involves us in a coloured family saga where the women carry out the dance. From 1939 to 2002, of Colombo in Chicago, one follows with passion the destinies of Shanti, Manga, Harini, Mayil, Kili, Leilani, Chaya, Kuyila, Himali, Raji, Shefali, Minal, Savitha, Sushila Names enchanters for women envotantes and determined. Determined to live, to build a destiny between arranged marriages and modernity. From Sri Lanka in the United States while passing by England, they show an astonishing facility of adaptation. To follow is a pure pleasure. Their pressures make us vibrate, our papillae are unceasingly moustilles with the evocation of the curries learnedly prepared throughout the history, our eyes are filled with wonder in front of the luxuriance of the vegetation sri lankaise. An exotic and delicious voyage which one leaves with a furious desire for precipitating in the Indian restaurant nearest.

6 thoughts on “I just received the…”