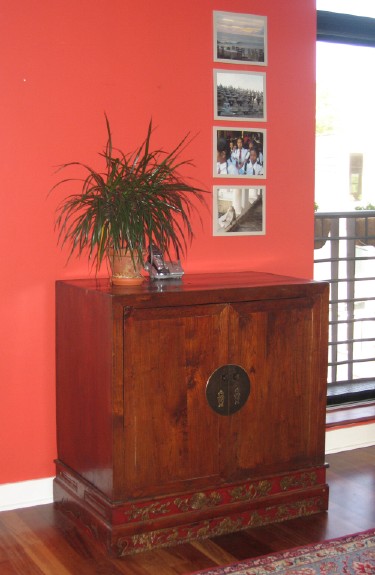 Worried about the folks in New Orleans. Watching the news and trying not to get too weepy. Waiting for word on what's the best way I can help from all the way over here.

In the meantime, blogging. We were slow getting out of the house yesterday; didn't make it down to Randolph Street until close to 3, and the market was due to close at 4, so we had to walk fast. We were open to a lot of different styles in china cabinet; the china itself is very simple, plain ivory with a gold border, so we didn't feel the need to actually display it, which gave us a lot more options. In the end, we went with a kimono chest from a place called Wow & Zen, a store I quite like and which I've bought from before. He gave us a good third off the labelled price too, probably because it was the end of the market day and he didn't want to take it back to the store. The chest isn't a real antique yet, since it was only made in the 1940s, but we don't mind. I fell in love with the red and gold carvings on the bottom edge, and the intricate metal handles, and the neat joinery of the wood. We had to move a lot of furniture around when we got home, trying to find a place where it would fit, since it was too deep for the hallway we'd originally intended for it. But I think we ended up with a happy space for it. Welcome, little chest. (Big chest, actually.) May you hold china and office supplies in perfect harmony.

In the evening, Kev and I had a long discussion about the future, talking about job and finance and medical and other stuff. Good talk. Somewhat tiring, but worthwhile. Probably more talking to come. I love that boy.

Speaking of medical, that just reminded me that I never did tell y'all something I meant to tell you about a while back. I hesitated because a) I didn't want to worry people until I knew exactly what was going on, and b) it's girly medical stuff, and I still have enough cultural conditioning that I hesitate about talking publically about stuff 'down there.' It feels inappropriate, somehow. Which is ridiculous, and I'm getting over it right now.

The short version is, I have uterine fibroids, which aren't a very big deal, but scared the hell out of me last June, and may end up requiring some minor surgery this fall. The longer version follows, mostly because I wish I'd known about this disease in advance, because maybe then I wouldn't have freaked out so much. Given how common they are, I figure all of you who are women, or who know women, should know about them too. About one-third of women will get uterine fibroids, usually when they're a little older than I am.

It all started in June, when I noticed a lump near where I thought my right ovary probably was. Anatomy is not my strong point. Actually, that might have been May; I think I was in denial about it for a while. I only noticed the lump when I was lying down; it disappeared when I stood up. Eventually I got Kevin to poke at it, and he confirmed there was a lump. I immediately became convinced in the back of my head that I had ovarian cancer and I was going to die, probably within six months. I knew that wasn't likely, but the back of my head doesn't listen to the front of my head so good. Kevin went and did research on the web, and came back to tell me that it was really really really not likely to be cancer, because there were all kinds of much more likely possibilities. This helped some, but not as much as it should have.

I got to a doctor (after some short-term health insurance madness) and he said that it was almost certainly uterine fibroids. He sent me for ultrasounds to confirm. They confirmed.

The bad news is that there's one quite large one (bigger than fist-sized) and lots of smaller ones, and my uterus is now about three times the size it would normally be. The large fibroid, if it keeps growing, will probably start pressing on my kidneys soon and may damage them, so that doctor thinks surgery is the right option. It's fairly minor surgery as these things go, very common, very safe, but will leave a scar under my abdomen, and of course, there's always risks with surgery. One clear unfortunate consequence of the surgical option is that if I do decide to have kids someday, I pretty much have to have a caesarean, because the surgery will damage the uterine wall and a normal delivery would risk a ruptured uterus. Caesareans are very common these days, but do carry some additional risks.

It's unclear whether or not I should first take the medicine that mimics three months of menopause (no fun) -- we're hearing mixed opinions on the pluses and minuses of it. It decreases bleeding, making the procedure simpler and less invasive, but it shrinks the smaller fibroids enough that they're hard to find, so the surgeon may miss some or many of them. Will get more info before deciding.

We're not super-impressed with this doctor, so we're also going to research Chicago ob-gyn folk before continuing. We were waiting for my full-time Roosevelt health insurance to kick in (the HMO plan has no problem with pre-existing conditions), so now that that's in, I'm on task to find a new doctor this week. Hopefully we'll have it all sorted out soon. Since I have no pain or other symptoms (like massive amounts of bleeding, which sometimes happens), there's no need to rush to make any decisions or start treatment, thankfully. But it'll be good to have it dealt with.

Once we knew it wasn't cancer, I calmed down a lot, but I still feel a bit like there are aliens growing in my body, and I resent the universe for it. There are various long-term ways in which this could impact fertility too, and even if I don't choose to have kids, it's frustrating and frightening, having that choice limited by some random disease. I find the thought of surgery scary, even if it's totally minor and routine. And I'm not looking forward to the pains and aches of actually dealing with this, including recovery time.

But it could have been much much worse, so on the whole, I've been pretty relieved.

13 thoughts on “Worried about the…”