Facebook Instagram Youtube Twitter Patreon Shopping-bag
Menu
I did end up with the muted fabric. I'm not sure it's exactly what I was looking for, since what I wanted was a sort of hybrid creation, a dress that looked clearly South Asian. I'm not sure this will do that. But it will be very pretty, and will fit me perfectly, which is perhaps enough to ask for in itself.

Yesterday got swallowed by running errands; after I came home from the fitting, Kev and I went to various stores buying items for the house. Mostly not anything glamorous; a trash can and soap dispenser for the third bathroom, for example, and more hangars. New pillows, desperately needed. Sheer curtains for our bedroom. We did pick up some pretty green glass hurricanes to use on our deck the evening of the party, and some clear tealight holders for the downstairs tables. We're going to try to fit 70-80 people in our house, which will require four tables on the deck, and four on the main floor; it's an interesting challenge. I plan to have candles everywhere (all white, I think, in varied shapes and sizes). If you hear I died in a terrible fire, you'll know why.

The big triumph of the shopping was that we found a sleeper loveseat for our tv room/guest room at Pier 1 that costs a third what the loveseat we had ordered from Pottery Barn would have cost -- we bought that one and cancelled the PB one. The PB one is a little prettier, but not anywhere near prettier enough to justify the cost. And the sleeper will be here next week (instead of in September), and will, well, sleep people, which is a nice bonus. Now we can put the air matttress in Kevin's study if necessary, so in theory, we have two potential guest rooms. Not that Kevin will likely be able to cope with that many people in our house, but it's nice to imagine. :-)

I was utterly exhausted by the time we finished and came home; I think I'm just a tiny bit under the weather, because I'm coughing occasionally and getting more tired than I should. But that may be more due to forgetting my synthroid a couple of days in a row. Still settling into the routines at the new place, figuring out where everything goes, including my medicines.

Y'all have been very patient with all my household stuff -- as a reward, here's the first photos of the new place, from the one room that's actually close to done. The food's from the last Kriti planning meeting; a lovely Middle Eastern spread from Sultan's Market, whose hummus still amazes me; I am also addicted to their meat pies. I don't know what's in there, but it's oh so good. The photo is slightly out of date; there's also now a large blue grill on the terrace outside, right up against the brick wall. You can add that yourself, I'm sure. 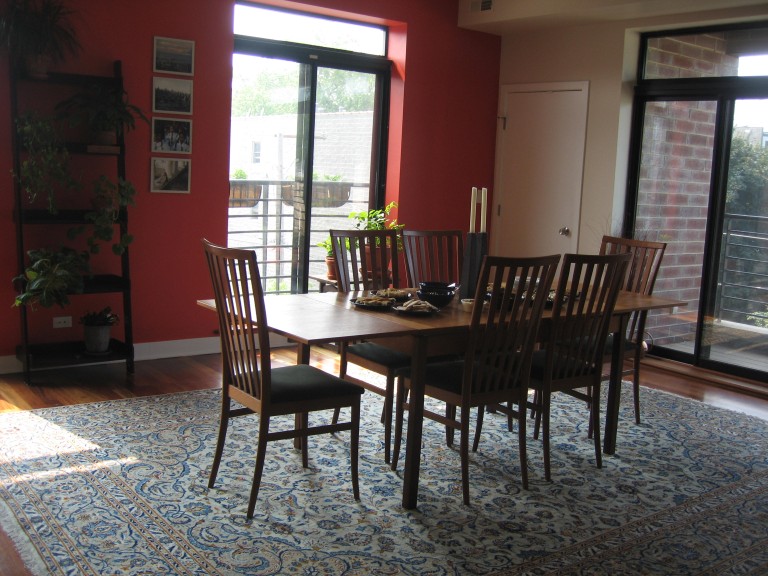 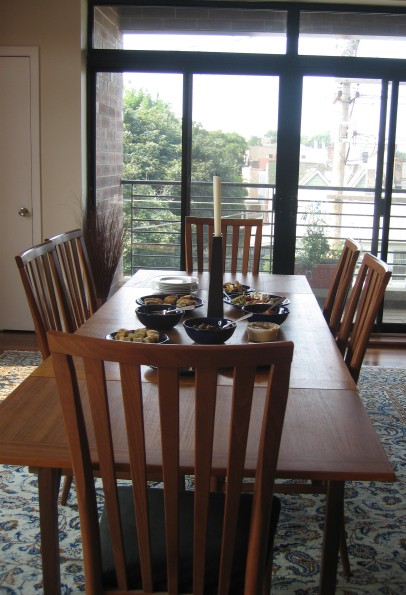 Plan for today -- e-mail and tea until 10, consultation with a student, then I think actually go to a cafe and try to write. Unless I can manage to do it here. Must write, dammit. At least I finally exercised yesterday; hooray for Dance Dance Revolution, even if I only managed a pathetic twenty minutes of it before running off on errands.