Facebook Instagram Youtube Twitter Patreon Shopping-bag
Menu
I've fallen a bit behind -- sorry about that. Let me try to reconstruct. On the 12th, we did visit the tea plantation, a pleasant and informative half-hour tour followed by a cup of tea. 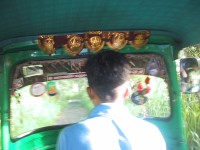 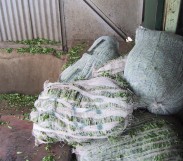 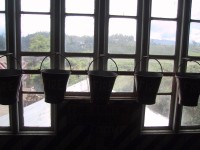 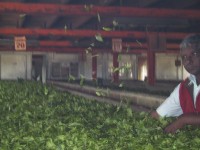 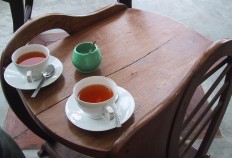 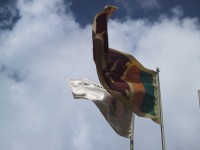 And then we spent a few hours in the Hakgala Botanical Gardens, which were stunning; I just wished I wasn't so tired, as clearly the best way to explore the gardens was by losing yourself climbing up the many rambling paths (rather than taking the paved low road that circled the gardens). I did some climbing, but got pretty tired, and had to rest often. It had a completely different feel from the Perideniya Gardens -- far more wooded, and oddly English in its flowers. Formal rose gardens, arrangements of snapdragons, hollyhocks, sunflowers, petunias, pinks, larkspur -- everything you'd expect to find in an English garden. 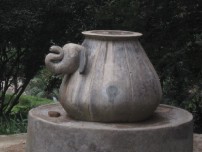 British flowers were common throughout Nuwara Eliya, actually -- partly due to the climate, which hovered around 60 degrees farenheit for much of our stay, and partly due to its heritage as a retreat for the colonials. I admit to feeling a certain strange satisfaction at seeing brown-skinned Sri Lankans staying at hotels like the Grand, knowing how unthinkable that would have been a bare half-century ago.

We walked down the street to Humbugs afterwards, for strawberry stuff, yummy.

In the evening, we ate a Chinese dinner at King Prawn, which was just as delicious as my mother had remembered. Highly recommended -- between this restaurant and the Grand Indian, given their large and varied menus, you could happily eat for a week in Nuwara Eliya. Karina's favorite food was the orange lassis at Grand Indian -- a bit sour for me, but still tasty. She went back to have them again.

The next morning (the 13th) we checked out of the Grand Hotel (pictured above), then went for a quick wander down the street. Had hoppers at one of the roadside stands near the hotel (run by the Sapphire Hotel, good) and picked up food for the train from the Grand Bakery (strawberry tart for Karina, mutton bun and chicken roll for me). Then a long train ride back to Kandy, almost missing our connection at Perideniya Junction because we hadn't expected it to come so soon. Our drive, Sannath, met us in Kandy, and drove us out to Kaladiya, our hotel in Dambulla. Or rather, he drove us to Dambulla and then discovered from our directions that our hotel was actually past Dambulla. It wasn't a hotel at all, but a large house in the midst of a working farm, and required many small roads to get there. He was quite worried about our ability to find it in the dark, and scolded us, rather, for not just staying in one of the perfectly nice hotels in Dambulla. We kept stopping and asking for directions, because he didn't seem to follow the printed directions I tried to read off to him, and he was very nervous because we were getting further and further into the jungle, and he said that at night, there were bandits in the jungle. All of this over a distance of perhaps 15 km from Dambulla, but still -- he was clearly worried, and I was stressed out, and not quite able to cope. Except that you do cope, because really, what else are you going to do?

Eventually we found it, and Sannath chided the caretakers for not having better signage. Our room was gorgeous, with a large four-poster bed covered in mosquito netting, looking suitable for a princess. And the bathroom was luxurious; painted a warm mango-gold and full of brand-new modern fixtures, including dual shower heads and a bathtub big enough for two and deep enough to float in (which Karina did, eventually). And air-conditioning for our room, with a remote control so we could regulate it from bed. Lovely. The house is incredibly peaceful -- set far enough away from the road that the only sounds are the birds and monkeys. (Karina might also note the early-morning kitchen sounds starting around 6:30 a.m. -- if that's likely to bother you, you might want to request the larger room that doesn't share a wall with the kitchen.) I'd particularly recommend Kaladiya if you're a fan of bird-watching; this is the perfect place for it, or for just a few days of utter peace and quiet. The meals are solid too -- Sri Lankan or European-style. Our favorite food was the fried banana in a treacle syrup, though I also enjoyed trying some more unusual foods I hadn't eaten before, like a green-leafy breakfast porridge, and a coconut milk sauce to ladle over the kiri bath (milk rice).

After dinner we discovered another frustration -- my cell phone had no signal in our room, and when I went to use the hotel phone, it turned out that a) it was closed due to the Sinhalese/Tamil New Year (as almost everything was on the 13th/14th), and b) it didn't generally do so well with international calls anyway (which I don't quite understand). Normally, this wouldn't be such a big deal, but Kevin had called the day before with some crises from home that I was trying to help him deal with (my car had gotten towed, and unless we got it back through convoluted means involving my mother and notaries within two weeks, the city was going to keep it -- there were also some problems with the inspection for our new home), and I had promised him that I'd call that night. I was getting pretty upset about it, until Karina suggested that maybe there'd be signal elsewhere in the house, and in fact there was a tiny bit of signal out on the verandah, and I was able to make my phone calls. So, relief, and then bed.

On the 14th, we had stringhoppers and curry for breakfast, and then headed out to Anuradhapura. This was badly planned on my part -- apparently the correct thing to do is stay at a hotel near the site, so that you can get up early and go before the heat gets too bad. The heat was well-nigh unbearable; we had planned to do a full three hours or so touring the ancient city, but after visiting one temple and the sacred bo tree, we just couldn't face any more. We drove past one of the smaller ancient tanks and some other ruins, and I got a small sense of what the two-thousand-year-old city must have been like (too vast to walk; it's recommended that you hire a bicycle to tour it properly). But I'm going to have to come back, clearly, to see it properly some day. 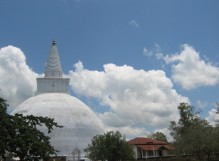 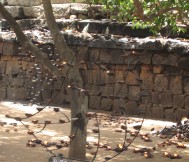 Then we drove back to Dambulla, and climbed the many many many steps (though not nearly as many as Adam's Peak would have been) to the cave temples. These were incredible, as promised. We took a guided tour, which was well worth the small tip we gave him afterwards, given all the details he pointed out of the ancient paintings and sculptures, and the history he explained, the questions he answered. It's fascinating to see how the natural dyes have lasted so well, over two thousand years, whereas the far more recent chemical dyes are already fading, for example. Karina enjoyed the many monkeys outside.

Then a quiet evening last night -- we went back to Kaladiya, rested, ate dinner, and I actually started writing, working on this non-fiction book. I figured out a more coherent and interesting structure, and drafted a section. It was reassuring, realizing that I do have things to say. I made Karina read it, and she seemed to think it was interesting, even though she'd been there for most of it. So hopefully other people will find it interesting too

This morning, woke up and wrote some more! Drafted a first chapter which I quite like at the moment. We'll see if that holds up. It took us a while to check out (the office was closed for the holiday, creating delays), but eventually we said goodbye to Kaladiya.

We got on the road to Kandalama. This is the most expensive hotel by far, at $191/night, two to five times the cost of any of the other places I'm staying. It's an architectural marvel, designed by Geoffrey Bama (who is apparently famous) and built into the side of the cliff. The coolest part so far is the infinity pool, a swimming pool that goes to the edge of a sheer cliff drop (there's a protective wall, just under the surface of the water, so it's not visible to the eye) down to the Kandalama Tank, a massive 1700-year-old tank that's the size of a medium lake. The design is gorgeous and tank itself is incredibly impressive. I can't imagine how much work it must have been to build it; I wonder how many workers died in the process.

So far, we've checked in, had lunch (sandwiches, heavy on the butter and mayo, with dry fries), and I'm about to go do internet (30 rupees a minute, highest charge so far, only one computer available in the entire hotel). There are a lot of services at this hotel, but I'm a bit appalled by the cost of them. I suppose they think if you can afford to spend this much to stay here, you're not going to blink at spending a massive amount on ayurvedic massages and jungle treks and trips to Sigiriya Rock. After internet, a quick swim, I think, and then we're going to go with our driver (far cheaper :-) to climb Sigiriya, to see the painted damsels on the rock, I think. Unless we decide to wimp out and just hang out here the rest of the day

2 thoughts on “I’ve fallen a bit behind…”