We did wimp out, as it turned out -- I wasn't feeling well, and I just wasn't up to a long climb. The Sigiriya damsels have been waiting a few thousand years; they can probably wait until my next trip. We spent the afternoon lying around in our air-conditioned hotel room watching old movies on tv -- Les Miserables, a quite decent production that I hadn't seen before, and Ed TV, goofy, but a pleasure to watch again. While we were watching, someone stopped by with a complimentary basket of appetizers and sweets, which went a long way towards making me feel more fondly towards the hotel. In between the movies, we went for a short walk around the hotel -- Karina bought a postcard and a little book on Sri Lankan mammals in the hotel gift shop; she's seen quite a few of them in two weeks! One interesting note about Kandalama, with its long open-air corridors, is that those halls are often filled with swooping bats. So if you suffer from fear of bats, this is not the hotel for you. We thought it was cool, though. 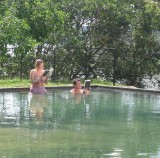 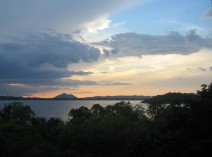 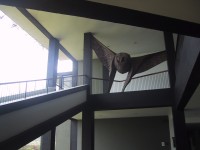 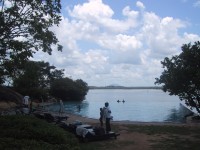 After the movies, we went for a long sunset swim in the infinity pool, which was something special. It's spooky, swimming out towards what looks like a sheer drop into the immense Kandalama tank -- it's only when you get about a foot away from the wall that you can see that wall below the surface of the water. Cool. The lifeguard goes away at 7, and the pool empties, but they don't actually close it until 8, so we swam until the sun was well set, and it was quite dark -- if they hadn't turned on some lights, it would have been utterly dark, since there were heavy clouds hiding the stars. We were hoping for rain, but no such luck; we did get a few streaks of lightning ripping through the black sky above.

Afterwards, a pretty darn impressive buffet dinner (though less so for vegetarians like Karina), with all the usual Sri Lankan dishes, plus duck curry, devilled crab, and a barbecue outside as well with massive grilled shrimp and the like. They don't stint on the food here, though we did have to stand in a slow slow line to get egg hoppers. I was still not feeling well afterwards, so I came back to the room, took some painkillers, and crashed hard around nine o'clock, while Karina was going over her receipts and budget, trying to figure out how much she could afford to spend shopping on her last day here. So much to buy -- worked silver, jewelry with moonstones, batiks, silks, carved wood, every form of elephant you can think of, including ecologically-friendly paper made from elephant dung...

Oh, I forgot to mention that we stopepd on our way at some point on the 14th (New Year's here) at a family-owned batik store and bought a few batiks; the family considered it good luck, the first sale of the new year, and invited us into their home for a bit of hospitality, serving us sweets and a lemony juice. A nice moment, though it felt a bit odd, sitting and eating/drinking without them joining us.

Now it's early, and once Karina gets out of the shower, I need to jump in. A long drive back to Colombo today (five hours, I think), so we're trying to get an early start.