Facebook Instagram Youtube Twitter Patreon Shopping-bag
Menu
Hey, munchkins. Sorry no posting for a bit -- holiday stuff got in the way. I spent Monday morning finishing off Christmas cards and putting them all in the mail (except for a few where I'm waiting on new addresses -- Heather -- ), along with the last batch of local job applications (to about fifteen schools who don't actually have jobs posted, but hey, you never know. There was one particularly good one that was just posted, for a non-fiction writer at Carroll College (first one on the page), which is near Milwaukee (and Roshani). If I actually got that job, I don't know if I'd commute or get a little apartment up there for sleeping in occasionally or what. But right now, I'd just be happy to get some interviews. Not a peep yet. Nobody wants me. Sadness. Woe. 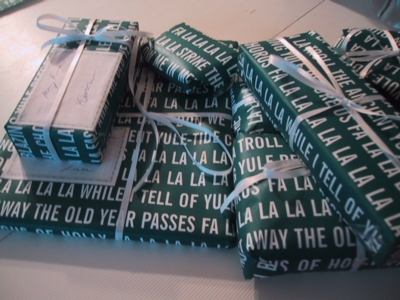 I can't be too woeful, though, because it's the holidays, and I'm having fun! I met up with Mirna (sister) around 3-ish on Monday and we went shopping -- most people are getting cookbooks or SH books or both from me this year, but a few, like Kevin's family, need some extra items. And I needed a thank you gift for Anand and his roommate who let me crash in their New York apartment over Thanksgiving when I was there for a night. So I got nice Darjeeling tea and Frango hot chocolate and Harry and David chocolate-covered berries and mulling spices and a photo album and a few little jewel-like ornaments and a fancy pen and probably something else I'm forgetting. And then we had dinner at Grand Lux Cafe (above the Ann Taylor in the Michigan Ave. shopping district), which was very yum (Jamaican pork with an actually spicy pepper sauce and mashed sweet potatoes and black beans and rice, accompanied by a Rosemount shiraz (one of my favorite wines, a real stand-by) and followed by hot chocolate because we were too full for dessert). Really nice day, and I felt all Christmas-y with sitting by the big glass windows, overlooking the trees dancing with white lights and the people rushing to and fro.

And then yesterday, I did some work in the morning and then in the afternoon, went up to PaperSource, and bought green paper (printed with the lyrics Deck the Halls in white) and white grosgrain ribbon and little red foldover cards and photo corners for the album and gift tags. And then I came home and took my silver pen and wrote the names of various dishes for my holiday dinner on the red cards and drew henna-style designs on them which mostly came out surprisingly well. I guess these were designed to be drawn freehand and not look too bad. :-) 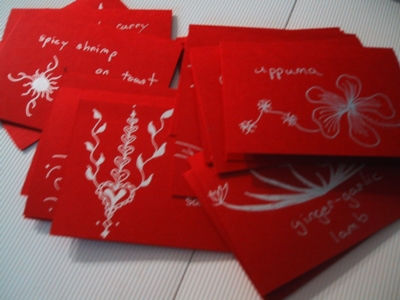 By the time I finished that, it was almost time to walk six blocks up to Randolph (in the light rain, fun) for dinner, because Kevin and I had made reservations at Red Light, to use the gift certificate his folks had given us last Christmas, and which was just about to expire, eep.

A gift certificate to a nice restaurant is a lovely gift, especially when you decide to spend a little extra of your own money and go ahead and do the chef's tasting menu. They were wonderfully accommodating, and managed to create a six-course menu (plus soup and dessert) for Kevin that didn't have any seafood (whereas I got lots of seafood :-). We were there for almost three hours, and the seared ahi tuna and the lobster-mango rolls were the best part, but the five-spice ribs and the duck and the foie-gras/pork steamed dumplings were also delectable -- oh, and the white chocolate mousse/fresh strawberry/dark chocolate/raspberry sauce concoction they brought us for dessert was just splendid, and even though we were stuffed at that point, we came damn close to finishing it all. I recommend, if you're going to do something like this, just not eating earlier in the day -- it helped. As did only eating half the (yummy) soup, and hardly any of the final main entree (which we took home, and which will be lunch today). It was much fun, and definitely felt rather special and celebratory, so hooray for gift certificates. :-)

Today is running around doing all kinds of little things preparatory to leaving tomorrow for California, laundry and packing and such. I'm going to David's place for a week, then Jed's for a long weekend, then Kevin's folks for Christmas, then San Diego for MLA, then back to Jed's for New Year's and the rest of a week. I'll be away from home for almost a month. Interesting packing needs, including lots of party stuff!