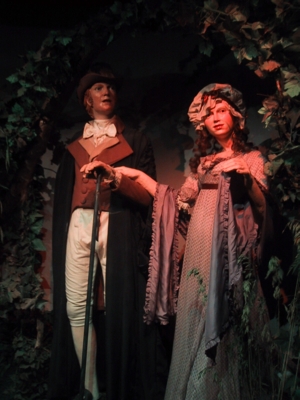 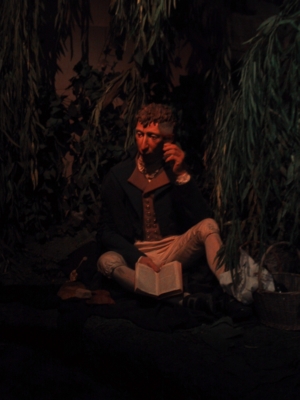 I know it's cheesy, but I did actually enjoy the little informational ride, the Oxford Story. How can one object to historial figures, not to mention riding along in a little mechanical cart? And, of course, this scene did remind me of Lord Peter and Harriet on the river...

Perhaps the most interesting part of Oxford's history as told by this ride, though, was when they discussed Bishops Cranmer, Ridley and Latimer, burned to death for their (Protestant, I believe) beliefs, in the midst of what is now Broad Street. On October 16, 1555, Bishop Latimer turned to his fellow bishop and supposedly said: "Be of good comfort, Master Ridley, and play the man. We shall this day light such a candle, by God's grace, in England, as I trust shall never be put out." 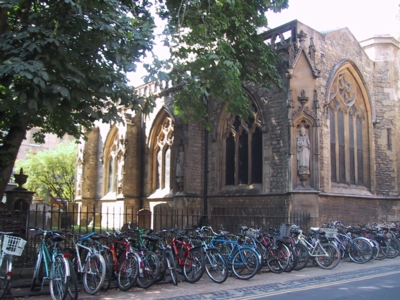 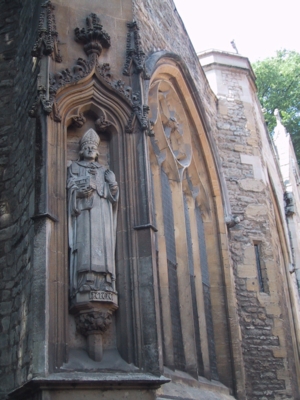 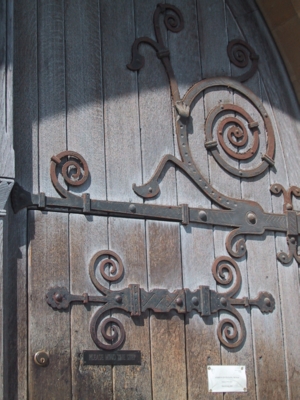 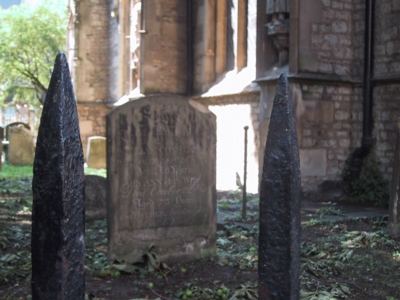 Pretty little church...England is full of them. :-) 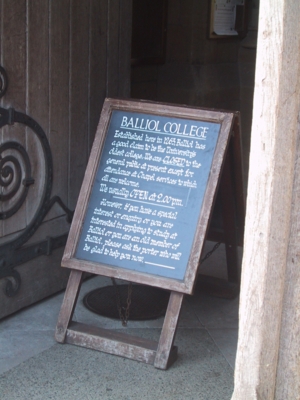 "Here is the House that armours a man
With the eyes of a boy and the heart of a ranger
And a laughing way in the teeth of the world
And a holy hunger and a thirst for danger:
Balliol made me, Balliol fed me.
Whatever I had she gave me again:
And the best of Balliol loved and led me.
God be with you, Balliol men."

Balliol College started from a penance imposed on John de Balliol in about 1260 to carry out a substantial act of charity -- which he chose to be a hall to maintain poor scholars in Oxford.

Balliol wasn't open to visitors, but the next college down, Trinity, was. Trinity is considered a latecomer, founded in 1555 with a charter granted by Mary I and her husband Philip II of Spain. It's known for its lovely gardens: 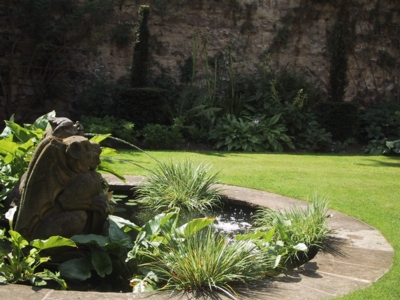 The Fellowes' garden was locked, but I took a photo through the bars. Beautiful gargoyle! 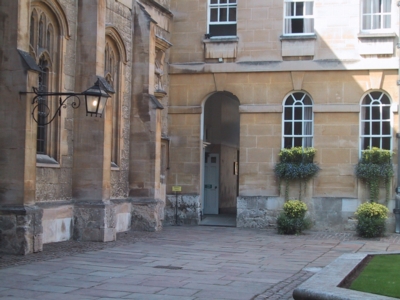 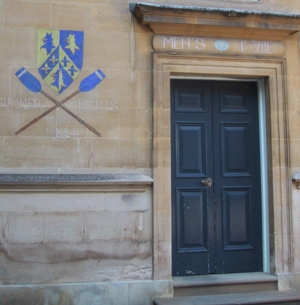 The poet Walter Savage Landor had the distinction of being sent down from Trinity in 1794 for 'discharging a firearm' across the quad at another student. The writer, explorer and translator [some might say expurgator] of The Arabian Nights, Sir Richard Burton (1821-90) was rusticated from Trinity for general impertinence to the establishment and, finally, riding about in a dog-cart. (Rustication is being sent down -- presumably to more rural places -- for a period, so is short of expulsion. Burton never returned.) 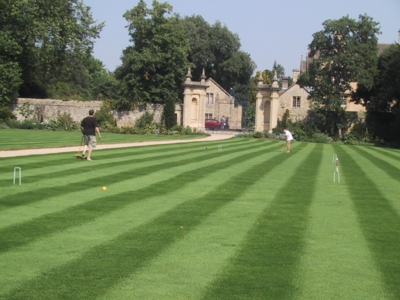 Undergraduates playing croquet! Quite a change from the ultimate frisbee we played on the quads... :-) 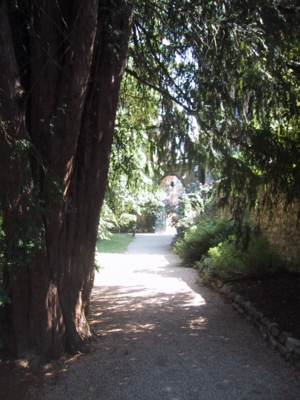 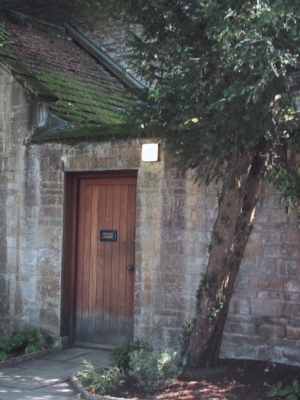 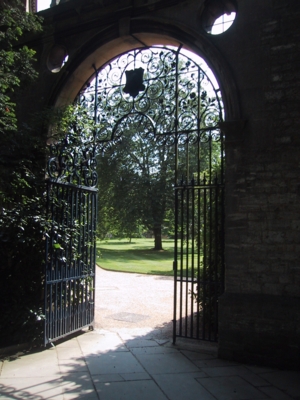 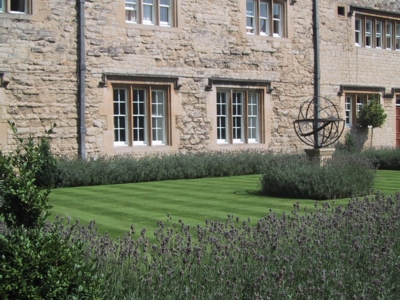 I could have lingered in those gardens for quite a while, but time was getting late, so I wandered on. It surprised me, a little, how old Oxford evidently was. Oh, the buildings looked pretty similar to those at the U of C, but the stone itself was obviously much older. I hadn't expected that to be so obvious. 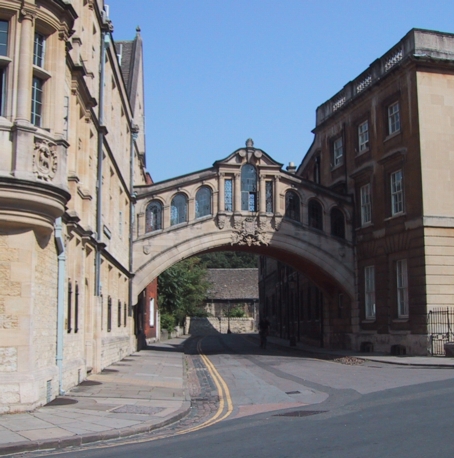 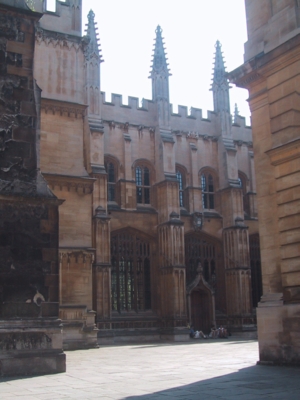 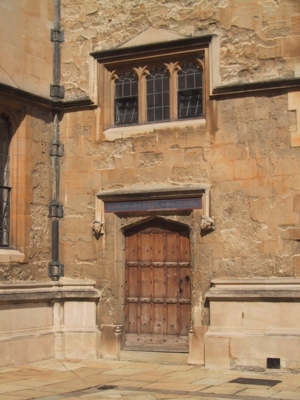 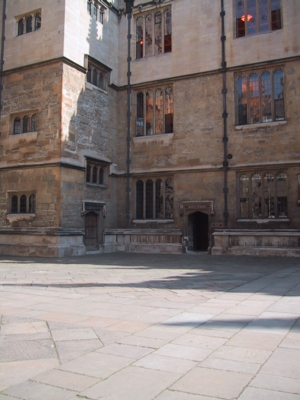 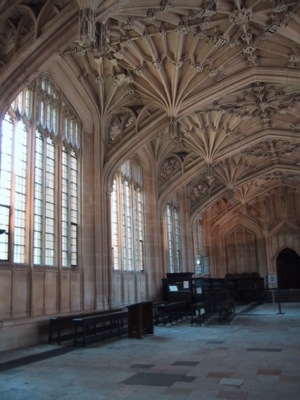 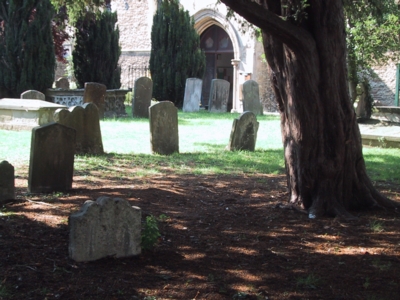 And finally, The Eagle and Child pub (known locally as the Bird and Babe), where C.S. Lewis and J.R.R. Tolkien used to hang out with the rest of the Inklings. How cool is that? 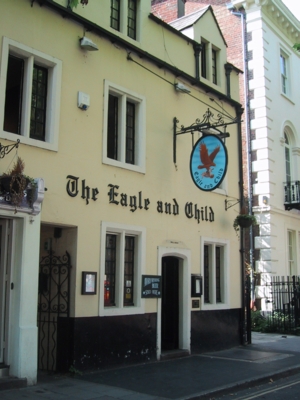 "...The real Oxford is a close corporation of jolly, untidy, lazy, good-for-nothing, humourous old men, who have been electing their own successors ever since the world began and who intend to go on with it. They'll squeeze under the Revolution or leap over it when the time comes, don't you worry."

2 thoughts on “Oxford I know…”