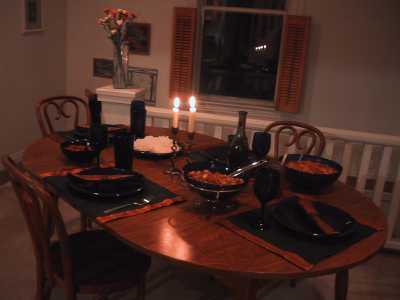 Had a lovely dinner last night. I felt like getting a little fancy, so I actually set the table with placemats and napkins and napkin rings even. :-) A little civilization is a good thing. Rice and curries; pretty standard fare, but satisfying. I'll be eating leftovers for a few days, then will probably cook another big curry on...umm...Tuesday? The goal being to not cook too much or too often, since I'm leaving on Friday.

Pleasant conversation over dinner (though Marcia's still job-hunting; if you need an excellent copyeditor and don't mind her working from Utah, drop me a line...). Not really sure what we talked about; some publishing and politics, some movie chatting, that kind of nonsense.

Afterwards, we went to Mike's party. I was already a little toasted from dinner, and got somewhat more so at the party. Usually I'm really careful about watching my alcohol intake, but I think I had one or two too many glasses of wine last night. I drank water, but apparently not enough, as I've had a moderately rough morning. Wages of sin, as my mom would say. But I had a good time -- there was dancing, and it actually got a little dirtier than department parties normally do. I think it was Hope's influence -- she's a San Francisco girl, with chopped short blonde hair, and looks pretty damn cute when she gyrating in a white tank top and blue jeans (I think blue jeans? It was dark...). Made me homesick (once again) for the Bay Area. She's thinking of coming out towards the end of February; I'm hoping that she'll be out there for the Best Bi Erotica reading at Good Vibes, so I can introduce her to my friends. I think they'd get a kick out of her. It was much fun to dance like that again -- she has good hips. 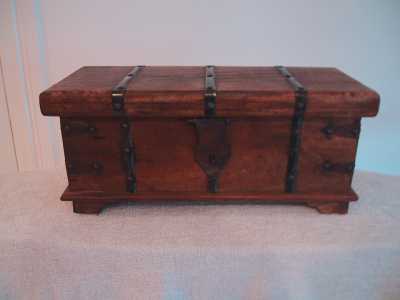 Another cool thing about last night was that Paul and Marcia gave me my Christmas present! A very charming chest, quite medieval-looking. I was desperately needing something to keep all my hair stuff in (scrunchies and headbands and barrettes and such); it was spilling over the dryer and falling onto the floor. Now it's all neatly tucked away. I suspect it won't stay quite as neat inside the chest, but that's the nice thing about chests and cupboards -- you can close the lid/door, and the mess magically goes away. :-)

I ought to settle down and get some real work done, but it's not looking so promising yet. I'm still not done with the damn cosmology book (yes, I still like it, but I've been reading it for like five days now, which is just excessive). I'm going to finish that this afternoon, come hell or high water, hangover or no. After that...well, there are some last lingering Christmas presents to finish up, 'cause I'm a big goober. Maybe I'll manage that today. Also have to finish the Melcher draft, and possibly do a second version. That should be enough to keep me busy for a while.

Hope you're having a good weekend! Rest up. Eat chocolate bon-bons. (Paul and Marcia tucked a box of Belgian hazelnut creams inside the chest. Mmm....)