Facebook Instagram Youtube Twitter Patreon Shopping-bag
Menu
I was taking a bath a week or so ago, looking at the bubbles, sort of wishing I had my camera so I could take cool photos of bubbles. So yesterday afternoon, when I came home all exhausted from my running around, I took a long, hot bath. Lots of satsuma (Japanese orange)-scented bubbles, a copy of Bujold's Civil Campaign and the Herbert book I'm reading for my paper, a few oranges in case I got hungry or thirsty, and my camera. It was fun. I didn't use the camera much, because I was afraid of getting it wet -- just a few photos and then I covered it with a dry washcloth and put it out of range of splashing water. Lots of Bujold. No Herbert. Plenty of bubbles, and my rubber ducks, of course. 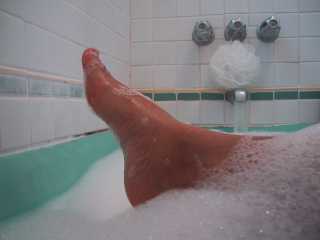 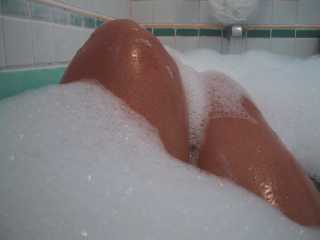 Mostly, I think it's knowing that the naked knee or foot is connected to the rest of a naked person. That might work even better for a viewer than for me...'cause I know exactly what the rest of the body in the tub looks like, whereas you are free to imagine whatever suits you (well, those of you who haven't seen the rest of the body, at any rate :-). All it needs is to be consistent with what's shown...and what's shown isn't very much.

I'm sure I could connect all this to fiction if I tried, but my brain's not quite up for that yet. Y'all make the connections for me, okay? I'm sure M'ris could write quite a pretty little essay on the subject...

I was pretty exhausted after all the running around, so eating pizza and wings with Carol and watching Memento was just about right. What a fabulous movie! Jed says that it has flaws, despite its brilliance, but I refuse to think about those. This movie was just so very smart. Made my brain hurt a little while I was watching it -- I kept peppering poor Carol with my little theories about what was really going on while she was trying to just watch the movie and undoubtedly figuring out a lot more than I was. I remained attached to one of my pet theories for far too long, and it led me along totally the wrong track. Oh well. My version would have made a good movie too, but I think not as good as the one they made. 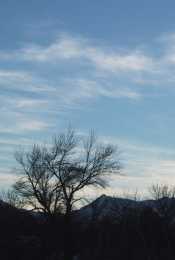 Lots of stuff planned for today; I'll spare you the details. Just picture me quietly working in my apartment, as the sun rises over the mountains. I'll probably check in again later.

11:00. This day is not going as planned. Oh, I did get up at 6:30 and work fairly diligently on Hawthorne stuff until 9:30 or so. But then I napped on my sunny bed for half an hour, and woke up with an idea for M'ris's aliens anthology. I hadn't planned on writing anything for that anthology. I didn't have time to write anything for that anthology. But I was too drowsy to get up yet, so I thought about it some more. And the dialogue started forming in my head. When that happens, I know I'm pretty much doomed -- unless I actively fight the story, it'll get written. And if I actively fight it, I'll be unhappy. And it did seem like it was going to be a pretty short story. So I said to hell with it, got up, reheated my tea, and wrote the story. "Before the Aliens Came" is now 1750 words, and the first draft is done. I've sent it out to the readers' list and while I currently really like it, I have no idea what I'll think of it in an hour, or what anyone else will think of it. Instead of thinking about it, I'm going to exercise a little, shower, and go get toner so I can print things (like SH contracts). Maybe after I've done all that I'll be better able to assess whether this is actually worth submitting to M'ris.

I wrote a story! Eep!