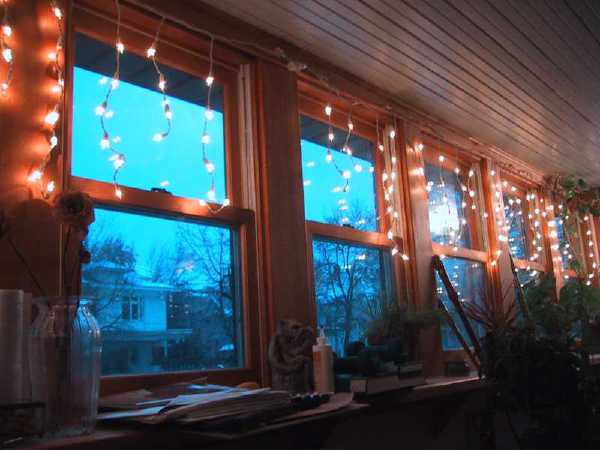 Guess what I did last night? Don't they look purty and shiny and all? Especially against that cool twilight sky -- by now, having edited the picture and put it up and such, it's already much lighter and greyer. That strange blue doesn't last very long...

I didn't get much else done yesterday, despite my grand plans. Went to reading, which was very good -- Jacqueline and Paul read material I was familiar with already, but Jenn's David read some really stunning poetry I hadn't heard -- I can't wait for him to come out with a book. And Jeff did some fun prose poems and myths that just made me grin; he went last, and put me in such a good mood as I tottered home.

Unfortunately, I was just too tired to work when I got back, though I sort of wanted to write. Floated around the apartment for a bit and then collapsed. I'm going to have to rearrange my plans for today too -- Kinko's messed up my students' chapbook order, so I have to go pick them up this morning instead (very disappointing not to have them for the last day of class). I'm going to combine that with some other little errands; getting a new watch battery for my good watch, possibly getting the frames to my glasses straightened, 'cause I slept on them and now they're bent funny, getting the conference poster framed for my dad as a Xmas gift -- that's the sort of things dads like, y'know, to be able to brag about their kids and think that what said kids are doing is much more important and impressive than it really is. :-) Will probably pick up some more paper while I'm at it; I've got plans for various books that I'll need to do pretty soon.

Then this afternoon, either SH stuff or I start grading student portfolios, whichever I'm in the mood for. If I'm good, I finish both of those tomorrow. Sunday, read Hawthorne-related stuff, draft intro, e-mail to professor. Monday, hopefully meet with professor, hand in grades on students. Tuesday, work on paper, Kev arrives in evening. Wednesday, ignore Kevin, finish paper, hand it in. Thursday, start second paper. Friday - Sunday, ignore Kev some more, work on paper. Monday, finish second paper, hand it in, all done, relax!

Yah, it's gonna be one of those weeks.

Aren't you glad you're not in school anymore?

Though to be honest, I'm sort of looking forward to the Hawthorne paper, at least. I'm probably going to be talking about the way Hawthorne uses humor to clue the reader in to the fact that House of Seven Gables doesn't really say what it might at first appear to be saying, if you weren't looking closely. Which is basically an argument focused on narrative structure and technique, which is what fiction writers think about, y'know? Heck, it may even help me in my own writing someday, which is the kind of synergy that I can only hope for in this graduate program. Mostly, it seems like I'm working on stuff in my lit. classes that's pretty far from my own fictional concerns. But that's okay. It's making me smarter. I think.

8:40. Copy edits came back from Melcher; just spent half an hour dealing with those. Only one embarrassing missed word -- mostly it was just issues of clarity, and I told them to leave at least half of the things they queried on. That's sort of comforting; it means I did a semi-decent job when I did my own line edits. Most of the stories didn't need much in the way of line edits, but there were a few (including one of the semi-big names) that I did extensive work on. This makes me feel like the work was worthwhile.

Speaking of...well, not really speaking of much of anything, but I've been meaning to mention this for a while; Sunita, who used to be art editor at SH and who has been a long-time reader, is looking for a job; they're shutting down her building and letting everyone go. So if you know of any physics/engineering-type jobs, you might want to glance at her resume. Thanks!

It's probably late enough now that if I dress and go, the stores will be open. So I'd best run -- but will note (sorry, Jed) that I've been having a very pleasant morning listening to Buffy, the Musical on my computer. I downloaded the MP3's last night... :-)

1:00 p.m. Dangit dangit dangit. So I went and did some errands, though I didn't manage to fix my watch or glasses. Maybe tomorrow. Or this afternoon. Because, you see, I have to go back to that area, because I made a stupid mistake. One of the things I needed at the art store was a do-it-yourself frame, because reader-Meriko wants to buy "One of the Ways..." but requested a wall frame rather than a tabletop. No problem -- in theory. But in practice, I mis-measured -- I thought the piece was 6x9, and it's actualy 6.5x9. So I have the wrong frame. Which means I have to go back to the store, and they're going to laugh at me. I hope you feel properly sorry for me.

I'm actually restless enough, that it's not necessarily such a bad thing. I'm having trouble settling down to any of the work I was supposed to do this afternoon. Maybe I should just declare this an errand day and be done with them. I need more toner and paper for my printer too. I bet there's somewhere downtown where I can buy that... 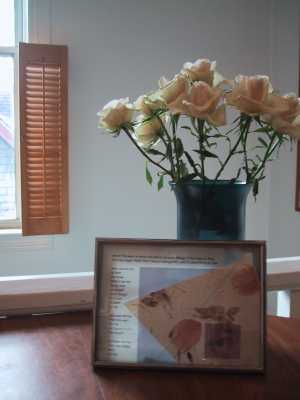 3:30. Triumph! Silver frame, in five minutes (once I actually got down there). That was much less painful than I expected it to be. I felt like virtue (in my getting off my lazy butt and actually going down) had been rewarded. Of course, I only felt that way for a few minutes, because as I was walking down the street afterwards, two big guys (dressed in such a way that you'd expect them to be going to go do something mechanical involving lots of grease and gears) stopped me...and asked for directions to the new library. I can understand why they asked me -- me in blue jeans, sweatshirt, backpack over my shoulder. I looked like someone who should've known where the library was. But most sadly, I did not. When I admitted that I had no idea, and suggested they ask the guy in the store next door, they looked abashed and said, "Never mind -- we'll just walk 'til we find it..." Poor guys. All they wanted was a library...

Did I mention that Salt Lake is just weird? As I continued down the street and reached the intersection, starting across, I passed a man and a woman, very nicely dressed, who were shouting at a car that had started to turn (against the light) into the crosswalk -- and they were shouting, "Fucking Mormon!" Sometimes you can immerse yourself in academia and forget you're in a deeply-divided city...and sometimes you just can't. Weird. I've heard tons of racial/ethnic slurs on the street from angry drivers and pedestrians, but never before a religious one.

Anyway -- fixed my watch and glasses, and even read a little Hawthorne stuff on the bus. I'm gonna make some more tea and try to work my way through the rest of this essay, though I'm not sure it's really so relevant to what I'm doing. Do I really care whether House has something to do with Hawthorne's take on democracy in America? Maybe...but I kind of doubt it.

Carol's coming by tonight to watch Memento and eat pizza (or Chinese food) with me...Paul/Marcia may join us too. In either case, should be fun. I've been meaning to watch that movie for a while.