Facebook Instagram Youtube Twitter Patreon Shopping-bag
Menu
Hey -- I just realized that I put in the wrong image sizes for many of yesterday's photos; I was awfully tired when I was doing that last update. Sorry abou that. Most of the pics look better (and a little larger) now. The one for Basil still looks odd to my eyes, but the image size is right, so I'm not sure what the problem might be. Ditto the one of Jed and Jeremiah, actually. Hmm... 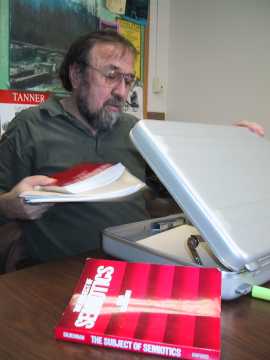 This whole camera thing is changing the way I look at things. I was in class just yesterday, and somehow we got on a related subject, and the next thing you know, I was pulling the camera out of a pocket and asking Francois (professor) if he'd mind if I took a photo. He said that that was always okay with him, but that he wouldn't pose. Fine with me; I really dislike posed people shots for the most part. (Well, I don't like taking them, not yet, anyway. They seem boring.) I like this shot; I think his steel briefcase is cool, and that book, The Subject of Semiotics, feels almost painfully apropos for this photo (we're moving into Camera Lucida next, which I suppose will be even more so). I'm still not sure I understand camera etiquette; are photographers allowed to just pull out cameras at the end of class and start snapping pictures? Writers can certainly take notes on anything and anyone, but that's far less intrusive; the person you're observing may not even realize that you're doing so, whereas the camera, even with the flash off, is much harder to miss. And that, of course, changes the nature of the photo, doesn't it? It's always at least a little bit posed once they know...unless you can get them to forget. It's interesting; a whole new series of questions and challenges that I've never had to deal with as a writer. Confusing too, but still fun. :-) One plus of the digital camera is that I can immediately show the subject the photo and ask for permission to use it/post it/publish it. Francois did give permission for this usage; I was pretty sure he would. He's far more of a photographer than I am, so I expected him to be pretty free about being photographed -- although perhaps that's not a necessary correspondence. I do rather feel an obligation now, myself, to other photographers -- if I'm willing to take pictures of people, then it feels like I should be willing to have my picture taken. I'm not quite ready to grant blanket permission to anyone to photograph me at any time...but on the other hand, I don't think I'm likely to say no to a photo being published either. Well, as long as I'm dressed. Naked photos are a whole 'nother category, with their own rules and oddities. At any rate, I'm still trying to figure out what the ethics are of all this; it's fairly easy to ask individuals for permission, but what about parties? Crowd scenes? Strangers in the park? Does there come a point where you lose the right to object to having your picture published? A writer can write almost anything about you, as long as it's not actively slanderous/libelous. Are the rules different for photos? And what if it's just that you think you look awful in that particular photo, and you want every picture of you that's up on the web to be beautiful? I know lots of people who would prefer it that way, including quite a few journallers. :-) Heck, including me, really. I'll tolerate the non-beautiful ones...but I wish I could sneak around the web replacing them with more attractive images of me.

I suppose my ethics/practices on all this will develop as I go. Mostly, I'm just having fun with it right now. I love my camera.

Oh, before I forget, Kevin's job appointment is all official. He'll be starting a tenure-track job at UIC in the fall; here's the journal entry I wrote the day I found out. Reading it over, I realize that it sounds like I'm definitely moving to join him when I finish grad school. Ummm...that's more up in the air than it sounds in that entry. Long-term plans are a big hazy spot in my life; too many variables and not enough definites at this point. There was a time when that would have driven me crazy, but somehow, I'm okay with it these days. I'm not sure why, but my best guess would be that I love the work I'm doing, and that it gives me a sense of groundedness that I don't think I've had since I was a kid. I like it. (Sorry the photo of Kevin is so dark; I didn't take it, so you can't blame me. He generally avoids having his picture taken; the only other good ones I have of him are a) one rather overexposed one, also from the day he graduated, and b) one of the pair of us, dressed up for a wedding; he looks reasonably sharp, but he's got this little goatee and mustache thing that he had for a year or so back then, and ever since one of my guests commented that he looked like Hitler, I haven't been able to get that comparison out of my head. So you get the dark one instead. :-)

I'm going to go back to reading Emshwiller for a while; the plan for today is to finish the book of short stories, catch up on the academic work (I got a little behind over this weekend), and write my book review for Chris (yes, it was due last week, but Michael came in at the eleventh hour and saved my butt with another review). Oh, and get groceries. I have all sorts of grandiose plans for what I'll do with the rest of the day, but you and I both know that they're about as likely as...as a very unlikely thing. Yeah, that's right. I'm a writer, I am. 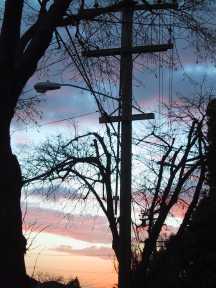