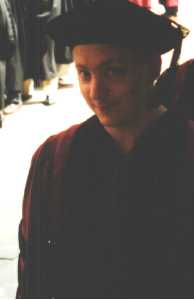 Stayed up late-ish talking to Kevin (though I think the real reason I slept so much is trying not to get sick). Got angstful for a bit because he made some offhand comment dissing Lacan and I got all stressed that what he was really doing was dissing the intellectual value of literary theory (and by extension, me, since that's a lot of what I'm doing in grad school). He cleared me up eventually, but it took a while. S'okay.

And then at the end of the conversation, he asked me whether he should stay at his post doc at University of Chicago for another year, or go ahead and start his tenure-track job at University of Illinois at Chicago (UIC) in the fall. Which was his roundabout way of telling me that they actually made him the offer. :-) We talked it over a bit, discussing pros and cons, but in the end, the two possibilities seemed pretty well balanced; I didn't have much helpful to add. Two good choices; not a bad position for him to be in.

And what does this mean for me? Well, if all goes well at UIC (which, incidentally, is where Roshani is going to med school :-), then he'll eventually be offered tenure there. And while it's certainly possible that he'll go elsewhere either before or after that point, it's likely that he'll stay there. Which means that Kevin is probably going to be located in Chicago for a long long time to come.

Now, would it be better if he had gotten offers in New York, or Boston or the Bay Area? Well, maybe. New York and Boston have winters that are almost as bad as the Chicago ones (which really is my main objection to Chicago). They're cities I've never lived in, which is a minor plus, but then again, I haven't really lived in Chicago either -- living in Hyde Park is a little different. The Bay Area -- probably my top choice in terms of places to live (plus the highest concentration of people I love), but I think possibly even harder for me to get a job there than in Chicago. So even that's iffy.

As for my job thing -- well, we'll have to see about that. I finish here in a few more years. Then, presumably I'll be going on the academic job market. If I simply apply to the best schools I can get jobs at, that might not include one in Chicago. If I limit my search to Chicago, I may be taking a job that pays less or is less prestigious or that requires more teaching (those three often go hand in hand), or I may not be able to find a teaching job at all. And I just don't know at this point how important that will be to me then. I could have turned into a hard-core academic; I could have decided that I love editing above all else, or that my writing demands that I not try to also be a professor. So we'll see, and in the meantime, Chicago seems to offer some pretty good prospects for my being able to get some sort of teaching job if I want it. I can certainly adjunct if nothing else -- there are lots of colleges in the area. Which was part of the reason we were really hoping he could find a big city job...

So it's all good, really. And a relief; even though it doesn't really settle anything about my future, I feel better not having those possibilities of small towns in the wilds of nowhere hovering over my head anymore. (Isn't that an odd image?) And airfare between here and there is relatively cheap. And Roshani will be in Chicago for at least a few more years until she finishes med school (and probably long-term, assuming *she* can find a job at a hospital there). So even though I slept 'til eleven and I'm really a bit shocked at how little of the morning is left, I'm pretty happy. Life is good.