Carol came and got me, and we went to the post office, and the drugstore, and the grocery store, and the garden store (I found a gorgeous gardenia plant -- mmm....made me think of you, Heather :-) and finally the used furniture store, where they still had the lovely maple rocker that I'd been lusting after a week ago. I had needed to make sure I still wanted it, you see, so I hadn't bought it at the time. You live with your furniture for a while, after all. Carol dropped the me and rocker off, along with a small chest that I'd found at one of the stores, rather flimsy but very pretty, and far better for storing office supplies than the nasty falling-apart cardboard box that I'd been using (instead of working at a desk, I work at a large table; I prefer having lots of workspace -- but there had been a lack-of-drawers dilemma, now solved). And before putting the box junk into the chest I of course needed to clean out everything under my table, sweep, etc. The sunroom ended up looking much better when I finished, but that took a while. And, of course, it meant that the living room looked extra shabby by comparison, especially with a large dead tree in it. :-)

So I got the tree into the dining room, cleaned up the living room, and put the rocker in its happy place. Mmm...what pleasure. What satisfaction. 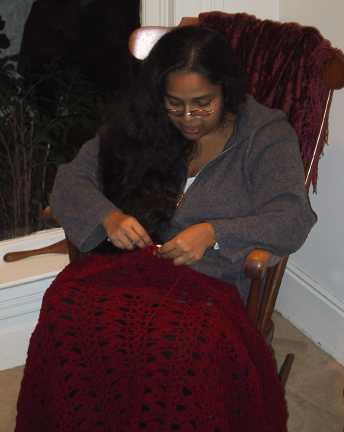 Although the dining room was still a mess, of course. Anyway, most of the rest of the day was spent cleaning and then cooking a few of Karina's favorites (egg curry and potato curry), and then going to get her (thanks again to Carol) and then staying up late eating and talking and taking photos like the one above. I have a bunch of her, but she made me promise not to put any up until she looked at them again and agreed that she looked good in them. She's still sleeping. Later...

The whole looking good thing is interesting. I was realizing, when I was deciding whether to put the above photo up, that I don't really care if y'all think I'm beautiful or sexy or not. Which is odd, because I know that for a while, I really felt that I shouldn't put any photos of me on my pages that *weren't* sexy. I think that my attitude shifted when I switched from writing entirely erotica to writing a mix of stuff. Somehow I feel much less obligation to...umm...try to be a sex symbol in order to promote my writing. Weird, huh? It's not like I'm a model, or an actress, where my livelihood is directly tied to my looks. I'm a writer, and it shouldn't matter. But while I was writing primarily erotica, I knew that if I looked sexy when I did readings, that gave me an edge. That if I'm in a horde of writers giving readings, the audience would remember what I read (hopefully), but would almost certainly also remember if they thought I looked hot. And it's not that I mind looking hot -- I enjoy it. But it did meant that I felt this strange obligation to wear skimpy black tank tops with short, tight skirts and black stockings...pretty much the direct opposite of the outfit above. You can't see my skirt under the afghan I'm crocheting, but I assure you that it's long and suitably demure for my granny look. :-)

And it just doesn't matter anymore -- anyone reading this journal for any length of time probably knows much more embarrassing things about me than the fact that I sometimes stick out my bottom lip too much for photos. :-) And even if you're a casual journal reader, even if you just stopped by and that photo was the first thing you saw of me -- so what? I'm busy! I have a pile of reading to do, and magazine things to run, and etc. and so on and somehow it just doesn't feel as important to project a sexy image all the time as it used to. Maybe it's the shift in genres. Or maybe I'm just getting old. :-)

Speaking of reading, I'd best get to it. Later, my dears.

4:00 p.m. Well, I'm about halfway through the history reading, Stephen Kemper's The Presence of the Past, a very interesting book on the way historians and others (including Sinhalese nationalists) have used The Mahavamsa as history, and constructed narratives of nationalism around it. Similar in basic contention to the essay I mentioned a few days ago, but more historically based (the other was based on a comparison of various version of the ancient texts). I can see the pull of wanting to claim the tale to be history -- if you do, it gives Sri Lanka a basically uninterrupted 2500-year written history, which is just astonishing. Not just stomping America into the ground, but India and England as well, I think. I'm not sure when British written history first showed up -- David?

At any rate, that's about it for accomplishments today. :-) I'm hoping to finish the book by 5:30 or so. Paul and Marcia are coming by for dinner and cards at 6:30, and while we still have a fair bit of the curries from last night, I'll make some more accompaniments, I think. A coconut sambol, maybe some simple raita (I have some yoghurt I want to finish off in the fridge), and a sweet carrot curry, I think. Shouldn't take more than forty-five minutes, so if I start at 5:30, I'll be in good time.

Before I go, here's one of the 'approved' photos from yesterday. :-) 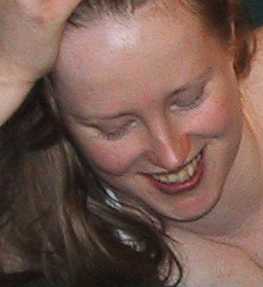 It's so delightful having her here!