Facebook Instagram Youtube Twitter Patreon Shopping-bag
Menu
Please note that if you're reading this in the monthly format and experiencing significantly faster load times, you have Jed to thank for harassing me into putting height and width tags into the images. I'll try to remember to put them in in future. Let me know as well if the 4x6 images (such as the one below) are too large for you (either for your screen or your load time) -- I can shrink them down to 3x5 at least.

I'm supposed to go run around with Carol this morning doing errands; she'll give me a call when she's up and ready. I think my brain must have been anxious about sleeping through her call; it started waking me up around 6 or so, even though I strictly told it last night that I needed to sleep until at least 7. I opened my eyes at one point, groggily pulled over my clock, and saw that it said 10:30. I couldn't quite believe it, since it was still pretty dark in my room, but the wind was howling outside my window, and I figured that it was possible that a rising snow storm might make it very dark. When I got up and went to the kitchen, that clock said 6:30. I came back and realized I'd read the second hand on my alarm clock at the 10. I banged my head against the wall a few times, then went and got my camera and took a picture from my bedroom window. The wind was fierce, and I wish I could have taken a picture of me, in my nightgown, with my sheer white curtains billowing in around me. Like something out of Interview with a Vampire. You'll have to settle for the mountains instead. 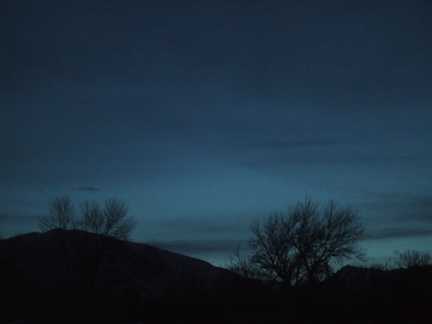 I was feeling particularly disgruntled because I'd just woken from a bad dream. And not that I wanted to stay in the dream, but I wanted to shift into a better dream before waking up, so that I wouldn't have the memories of that one lingering in my head. Orson Scott Card and I were both guests at a convention -- he was Guest of Honor, and I was one of the little piddling panel guests (one of hundreds). It wasn't WorldCon, but it wasn't a tiny con either. Something in between. He had finally read my writing, and he hated it. Thought it was somewhere between puerile and disgusting. He had been publically vilifying all through the first day at the con, getting worse and worse until he was finally insulting me personally. My two younger sisters were at the con, and were defending me to him, but they just weren't cut out for the job. What shocked me, was that the convention programmers heard about this, and decided to ask Mr. Card to leave the convention. I protested, expecting a horde of angry fans, but it turned out that they weren't willing to budge -- he'd been very demanding and difficult about all sorts of things (like the lighting for his GOH speech) and this was really just a convenient and politically expedient excuse for dumping him. As I woke up, the fans were rising up into a mob, and I fully expected that even if I survived the convention, my career wouldn't. Card had already put out a broadsheet denouncing me and the con committee. The analysis of this dream is left as an (easy) exercise for the reader.

The day has slowly improved; by the time I finished redoing all those image tags, I felt better and brighter. 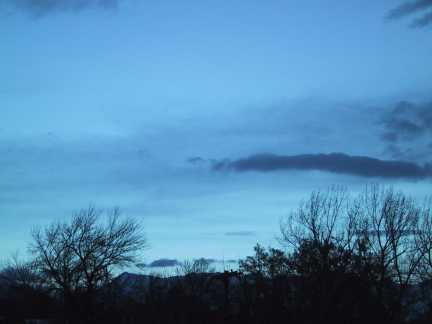 There's not sunshine quite yet, but the sky is now very light, and my tea is steeping. (I've settled into a tea schedule: two cups of English Breakfast, one of Irish Breakfast, one of Chai, and sometimes one of decaf English Breakfast before bed -- I don't always have all of them, but I do pretty much always have them in that order). I'm feeling capable of coping with my work, so I think I'll try doing the last few things for Strange Horizons that didn't quite get finished yesterday. (Heh -- took a break to make my tea and put on music -- hit shuffle on the CD player, and it started up with Tori Amos, the song that starts, "5 a.m., Friday morning..." -- some people have it worse than me.) Lots did get done, and I think we'll very soon have t-shirts and mugs, which is quite exciting. Don't *you* want a SH t-shirt? Actually, I'm not sure I can sell you one. As a non-profit, I think our selling of things is very strictly regulated. But I'm not sure. And I *think* we can give 'gifts' in exchange for donations...that seems like a technicality, though. There must be some way the IRS distinguishes that from actual selling, no? Otherwise everyone would be doing it and avoiding sales tax. I don't understand. :-( Hopefully someone will explain it to me.

We *are* getting more and more official. We have a real business bank account now (with imprinted checks *and* a credit card), and I signed us up for PayPal yesterday. The amount is left blank, so people can donate anywhere from a penny to a pound. Well, not a pound, 'cause I think it's in dollars, but you get the idea. And PayPal is doing international payments in quite a few countries now, which is a cool improvement on the last time I used it. I heard some foreboding rumors that the company might be in some trouble, but I'm just going to cross my fingers and hope. It's only a supplemental solution in any case; one of my tasks for Monday is to talk to Pair and figure out how to set up credit card acceptance on-site. I suspect that will make it significantly easier for most people to donate.

I'm really proud of Strange Horizons, y'know. Readership has been climbing very steadily in the last month, and while it's not such a trick to get a spike by advertising somewhere, it's much more impressive to retain those visitors. :-) I think my editors are doing great work, and we're starting to move past the 'scrambling to get every issue up on time' stage to the actual planning ahead stage. They've done a great job of putting together the special Waldrop issue for this Monday, with pieces coordinated across three departments (I don't think Waldrop wrote poetry, or that anyone's written poetry about him. Too bad.) And just in general, things seem to tick along pretty smoothly. We're still young yet -- not even six months old -- but so far, I'm very happy with our progress.

CS is doing splendidly too. Susannah's done a great job of getting readership up even higher, of cutting costs and bringing in more income. She's a lot better at all of those things than I am! Though I'm watching and slowly learning. They're doing really amazingly in the Preditors poll -- to the point where I'm tempted to go and change all my SH votes to CS votes, just 'cause CS actually has a chance of winning some categories. SH is doing quite well, but at this point, I'd be really surprised if it won a category, and I think it's only the top scorer in each category that gets an award. I'll probably dither about this until the night of the 31st, and then jump on the computer and change my votes at the last minute. We'll see.

It's just astonishing to me that I started CS practically on a whim; just a vague idea in the back of my head that 'it would be fun'. :-) And I would never have had the nerve to do SH without two years of experience with CS...

Carol just called -- it's going to be about an hour and a half before she's ready to go, because she has a heat inspector stopping by. Or something like that. So I'm going to go try to do some work. It's difficult to concentrate when there's a little bird in my head peeping "Karina's coming! Karina's coming!" She'll be here around 7:30 tonight...