Menu
Sunday morning, and we're quietly working. I've enjoyed a lot of living alone, but it is awfully nice having someone here to make tea for (and vice versa), someone to appreciate my cooking, someone to steady me while I perch precariously on a chair (and two phonebooks) hanging a light. Having Kirstie visit offers all the pleasures of having a roommate again without any of the problems. I wouldn't mind if she stayed another week or two, but she goes back tonight. Oh well...

I did promise you more photos, didn't I? She's kindly been helping me fix my appalling photos-of-myself-in-Utah-deficit. Now, keep in mind that it takes something like twenty photos of myself before I find one I can tolerate, and you'll get a sense of what a true friend she is. :-) She's actually really interested in photography, though more nature than portraiture, I think, so she tends to take artsy-type photos: 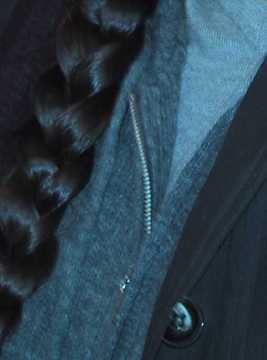 We'll probably spend some more time today putzing with the camera though, so you may actually get a photo of my entire face at some point. I bet you're excited. :-)

Other news -- well, I'm really behind on my e-mail, so I'm not sure what my other news is. Someone did ask what ever happened to those CD's I was going to record. I did actually record them, but I don't have the funds right now to duplicate them. I'm expecting a biggish check (which should have arrived more than a week ago), and when that gets here, I'll jump on Blue's case to finish the graphic design and then get the CD's copied. I had hoped to have them done in time for Valentine's Day, but I don't think that's going to happen, since it generally seems to take 4-6 weeks for duplication. That's a shame, esp. since I already missed having them for Christmas, but such is life. Not the top priority in my schedule, so the project has been a bit neglected. Here's a list of what's included though, so you can start thinking about whether you'll want a copy. I'm not sure of the pricing yet; I'm guessing it'll be about $10 each, but it depends a lot on how much the final duplication costs are.

It looks like the second one is a lot shorter, but they're both pretty close to a full CD. The second one is mostly stories, though, and the first is mostly love poems. I think I'd give the first one a PG-13 rating, and the second an R rating, if that helps distinguish them. Pretty much all of them are available in either the Poems or Stories sections of this site, I think.

Okie, back to work. I'll talk to you munchkins later...

I should have worked this evening, but kept getting distracted. I messed with a pile of photos for a while, and then started reading a book Kirsten bought me, Michelle West's Hunter's Moon. It's okay so far; Kirstie said later books in the series were really good, so I just had to get through this one. There are very few people who I would trust to make such a recommendation -- trust enough to read a not-great book for. Hopefully, we'll see that trust rewarded.

I know I have tons to do; my desk is a mess, but I just can't face all these bits of paper. I've gone through most of the backlogged e-mail, but there's still a few things to be handled. I've been fighting off a cold all weekend; dosed up on Nyquil last night because I was up coughing half the night before. I think I'll take Nyquil again tonight; I need the solid rest if I'm going to get through tomorrow. Lots of reading for Kathryn. Some reading for workshop. Some reading for narrative theory. Lots of reading for history. Meep. I suspect I'm going to have tired eyes by the end of tomorrow.

It'll be okay. I'm just a little mopey right now. I think I'm going to write in my Image Notebook, drink some Nyquil, and take the West book to bed. The rest can wait until tomorrow.

In the cafe, she laughs, a forkful of chocolate mousse in one lifted hand. Light glints off the citrines at throat and earlobes; she is very beautiful in that moment. Before the light can fade, I have grabbed camera from coat pocket, snapped the photo heedless of the other restaurant patrons. It is her birthday, after all; they will have to cope. But when I come home and examine the photo, the gems are dark and her eyes are closed. I have missed the moment of light.