Facebook Instagram Youtube Twitter Patreon Shopping-bag
Menu
I don't know why I'm typing when I should be reading. How odd that writing seems easier at this moment than reading. I think it's the sheer bulk of the reading that daunts me... 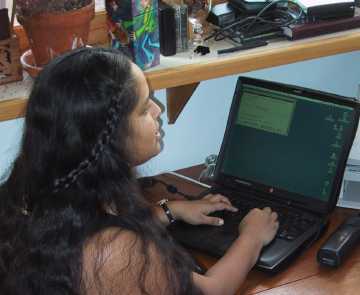 That's a fairly typical pose -- I'm not wearing the same clothes I was wearing then (Saturday?), but otherwise, it's a decent representation of me in this moment. Picture blue flannel pyjama bottoms and a black t-shirt with the collar cut out and Sandman's Death on the front for a more accurate image. No watch. Messier hair.

It's also the closest you're going to get to a full face photo for now; we spent yesterday afternoon working and making candles and never got back to photo taking. Oh well. Karina may come for a brief visit shortly -- if she does, I'll push the camera into her hands and make her take pictures of me. She won't mind, since I'll be doing the same for her. We're both somewhat narcissistic that way. :-)

Okay, I will now exert discipline and go read. We shall meet anon...

9:00 p.m. Not as far ahead as I'd hoped, but not as far behind as I'd feared. I may go a bit short on sleep tonight, but it's my own fault if so -- I took a few hours to finish that Michelle West book, Hunter's Oath (I think I got the title wrong yesterday). It definitely improved as it went, and I'm now eager to read the next one. Which sort of sucks, 'cause I think that means that I'm now in the midst of three epic fantasies, none of which are completed yet (by the authors). Frustration. Confusion. It's my own dang fault for not waiting until the series were written before starting them, though. At least the West theoretically only has one more book left to be written; I think the Martin does as well, but I'm not sure. I have no clue about the schedule on the Rhapsody series.

Exciting news, though -- Karina's coming! We weren't sure if she'd be able to make it out this year, but it looks like all's well, and in fact, she'll be here Saturday (which means she has several very busy days ahead of her now). She'll be staying with me until the third week of February, and Kevin will be coming out to join us for at least one long weekend. :-) :-) :-) I don't know how to explain it, but there's a part of me that only feels truly right with the world when it's the three of us.

Of course, this means that the rest of the week will be insanely busy, as I try to get as ahead as I can so that I'm not completely swamped with work and ignoring her while she's here. While, at the same time, trying not to get sick. Hmm...more Nyquil tonight? Maybe. My cough seems better, but a guarantee of a good night's sleep is worth a lot.

Back to my reading now -- and if you're looking for something to read -- it's Monday! Strange Horizons Day! With a great and chilling story by Michael Jasper, "Crossing the Camp" (especially pleasing to carry because he used to work with us, where he was fondly known as Jasper), an interview by Cheryl Morgan, whom I met at WisCon, with Jane Routley, who apparently writes something in between fantasy and romance, and a review of the Dune miniseries which will be out in video soon! I missed it on tv, and after reading the review, I am eager to see it. David has seen it two or three times now, I think.

the snow in her hair melting and her eyes brightly shining under the streetlights and she is laughing she is tilting her head back and eating snowflakes eagerly she is more alive in this moment than some people are in months and I want to kiss the pulse at her throat and I wish I could pick her up in my arms and whirl her around in the falling snow laughing!