I was a college sophomore at the University of Chicago, and dating Paul, who worked the late shift at Usite, the campus computer lab, and I would come keep him company, but then he was always busy doing stuff on the computer and not chatting with me, so eventually he got tired of my pestering and said, “Here, let me show you how to use Usenet”…

…and Paul set me up with my campus e-mail (I think I was the only English major at the time actually using my e-mail), and showed me how to sign up for newsgroups, and you had to scroll through all of them back then, saying y/n for whether you wanted to subscribe, so I joined:

• alt.callahans (a virtual ‘bar’ based on Spider Robinson’s stories of Callahan’s Crosstime Saloon)

…and then I hit the giant mass of sex groups, and ended up joining

• alt.sex (where I learned fascinating facts like which condoms were most durable yet still had decent sensitivity, and what you could consume to make your sperm taste better (cucumbers= good, smoking=bad)

…and eventually, I was reading these sex stories and thinking, “Hm, I can write better than some of these people — at least I can spell.” So I wrote a story and posted it, a pretty terrible story called “American Airlines Cockpit” that is exactly what it sounds like, and yes, you can find it on my site if you dig deep enough, and although it was inspired by a trip Lisette Bross and I took to England, the events of the story are fictional, I swear, American Airlines, please don’t sue me…

…and then people read it, and they liked it, and they asked for more, and I wrote and posted something like 20 stories over the course of the next year, and I ended up joining (starting? I can’t remember) an erotica writers’ mailing list, and eventually created a magazine, Clean Sheets, which taught me how to do an online magazine, so I was on solid ground when I later started Strange Horizons.

I also discovered MUDs around that time, and spent a lot of time on HoloMuck (where I built a virtual Narnia, including puzzle components — my first foray into game design) and FurryMuck (where I was the weirdo who walked around as a human who looked like herself, rather than a furry animal…

Somewhere in there (1995, I think), a college friend helped me set up my website for the first time, and I hand-coded the HTML and put the stories up there, mostly so I wouldn’t have to keep reposting them on Usenet when people asked, and in December 1995 I started blogging (according to the Online Diary History Project, my blog / journal is the third-oldest on the internet), and dealt with all the people asking me, horrified, why I would put my diary up for the whole WORLD to read? What kind of person DOES that?

Eventually, I realized that far more people would read my ramblings on Facebook (though I still copy them to the blog on my site religiously, because I don’t trust Facebook), and now there are something like 10,000 friends and followers who read what I write on Facebook (and Twitter, and Instagram), and the rest, as they say, is history.

Thanks, internet! For my writing career, for so many of my friends, for a vast portion of my life. For all your massive and mighty flaws (ah, the endless September…ah, the lack of decent moderation everywhere…), I do love you.

You taught me that even if I was a weirdo and a geek, there were plenty of weirdos and geeks just like me all over the planet. 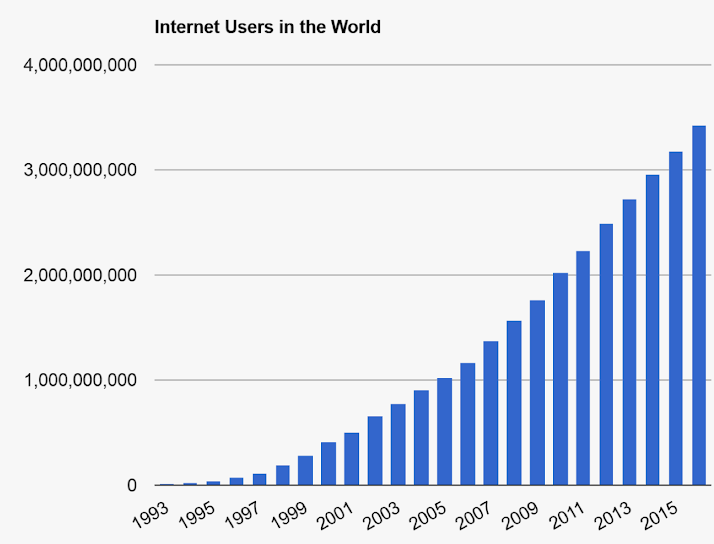