We’re so tired, generally, I think, in our lives. We turned the temp down (we like it cool for sleeping) and went to bed around 10-ish. I read for a little while before sleep (the place is set up well with reading lights at each spot in bed, like a nice hotel room), and that was pleasant (the new Becky Chambers book).

Kevin did wish he’d taken his phone with him so he could listen to audiobooks at bedtime the way he usually does. It’s funny how interwoven technology has become with our lives. But I think he and I were so tired we crashed pretty fast anyway.

The kids had a little more trouble getting to sleep — they chatted for a while, but with the time change and the novelty and all, it took a bit. They were okay, though. The bigger problem was the next morning — Kevin, Kavi and I all slept until 10:15, at which point I roused the two K’s and noted that we had to have breakfast (oatmeal and cereal and bananas we’d brought with us) and pack up and be out by 11. Kavi was a bit dismayed that she’d slept through the whole morning. She’s been sleeping a lot later since she became a teenager.

Poor Anand had been awake since his usual 6 a.m., and had been just waiting for *someone* to wake up and hang out with him. Normally I’m up by 7-8, but again, I think I’m just really tired on some fundamental level, and when I go on vacation, the first thing my body demands is as much sleep as it can get.

So it’s a good thing I overrode Kevin’s impulse to have Anand leave his iPad at home; he could at least get it from the car and play games on it (which he decided to do in the car, so as not to disturb us, sweet kid), while waiting for us all to wake up. If Anand were a reader, we could’ve just brought books, but so far, the reading bug has not bitten him, alas. He does listen to audiobooks, so if we’d planned a little better, maybe we could do that. He went out on his own to putter in the woods for a bit, apparently, but it is not so much fun for him without company.

That’s the round-up; hope it’s helpful as you’re planning your own woods excursions.

I’m glad we went, I wish we’d scheduled it for two nights, given the driving time, and the rest of the family agrees. If we’d stayed longer, we probably would’ve done a trail or two. I was a little disappointed that it was so overcast, because that meant no stars at night (boo) and no dramatic dawn the next morning (double-boo).

We swung by the local coffeeshop (Biggby) on our way out, but since I’m the only one fully vaccinated, I just ducked in to get lattes and muffins (tasty). There are various local attractions you can explore (they have suggestions on their site), if you’re vaccinated and feeling safe for it.

Our old dog really did love wandering through the woods, although now that we’re home, she’s been sleeping beside me for the last two hours, so I suspect it tired her out too. I don’t know how much more time we’ll have with her, so I’m hoping to take her out to the woods a few more times in the next months.

To that end, locals, I’d love suggestions for CLOSER cabin escapes. It doesn’t have to be this hotel-room fancy, but Kevin and the kids are not ready for tent-camping yet. (I love tent-camping, but I have to ease them into it.) Cabin suggestions welcome, especially if there’s somewhere we can kayak in the area, either with our own inflatable kayaks, or with rentals on site. 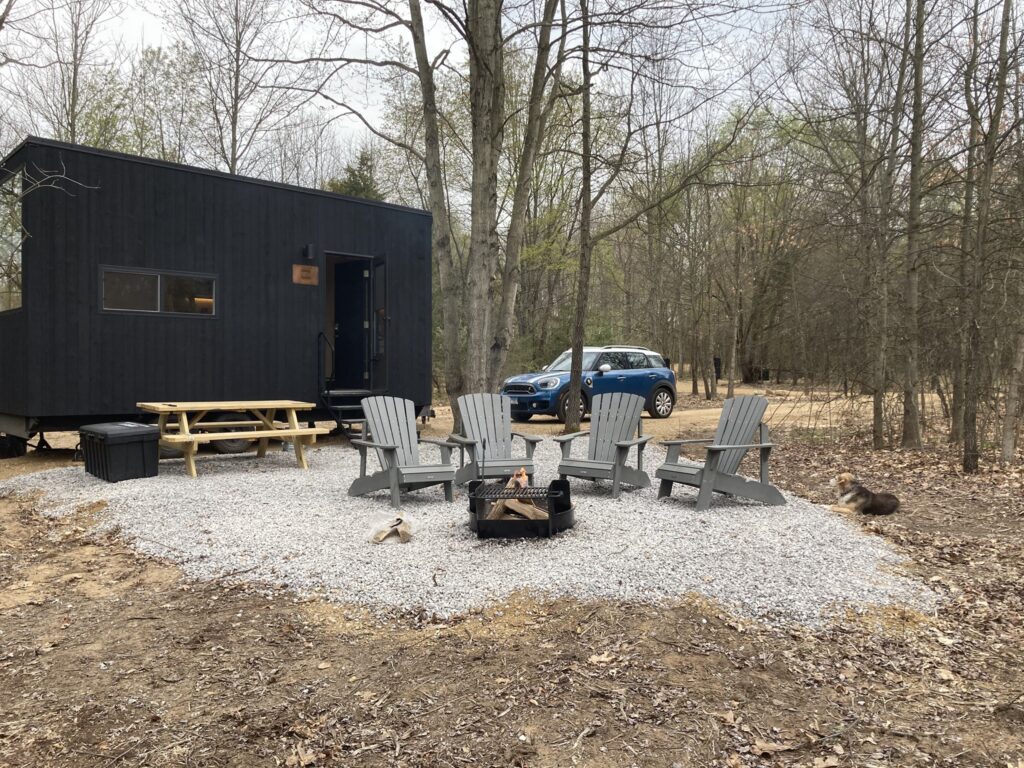