Woot! My story, “Among the Marithei,” part of my Jump Space universe, is now out at Asimov’s. Thanks to Alex Gurevich for Russian cultural help — any remaining errors are my own! I’m not sure if my Acorns writing group critiqued this story, but to them, and all others who gave me feedback, thank you thank you.

Sergey hummed under his breath as he walked to the Marith temple. His steps retraced a path he knew so well, he could have walked it at night, in the dark, even under assault. Yet the Marith enclave was the most peaceful place he’d ever been—so calm that Sergey didn’t even need to hum to soothe his newborn daughter, fast asleep in her sling, bound tight against his chest.

Three days old, and still Katya mostly slept, which both his wife and the doula had assured him was normal. They laughed at his anxieties, but they didn’t understand how Katya’s small griefs pierced his soul. He was no Marith empath, but he felt what she felt.

“Daughter,” Sergey corrected, smiling up at his tall friend, who had stepped out of the temple gate to greet him. “Spawn is technically correct, Bila, but humans prefer child, son, or daughter. Daughter indicates a female child.”

The Marithei bowed down to peer closely at Katya, the pale green fronds that framed his face going temporarily flat. Sergey appreciated the gesture—otherwise, they might have brushed against the baby and tickled her awake. “How can you know the sex so young?”

Sergey said, “Well, you can’t, really. But humans like to take a first approximation. It’s convenient.”

More about this issue, from their site:

“Our May/June 2021 issue begins with David Moles’s brilliant novelette about about deep time, sibling rivalry, and the end of the universe. Don’t miss “The Metric”! The issue concludes with Robert Reed’s exciting new Great Ship novelette that shows why “Flattering the Flame” is a very good idea.

You’ll find a lot of other wonderful novelettes and short stories nestled between these must-read works: Ray Nayler depicts a strange alien invasion in “Año Nuevo”; James Gunn lays out a plan for “Reclaiming the Stars”; Ian Creasey takes on some thorny genetic manipulation questions in “Super Sprouts”; Rick Wilber & Brad Aiken tell us the tale of a very modern “Tin Man”; new to Asimov’s author Annika Barranti Klein reveals the tragic secret of “Phosphor’s Circle”; the situation is tense in new authors K.A. Teryna & Alexander Bachilo’s portrayal of “The Chartreuse Sky”; and we find out why “My Heart Is at Capacity” in TJ Berry’s first tale for the magazine. Mary Anne Mohanraj shows us what it means to live “Among the Marithei” and Dominica Phetteplace gives us a stark view of the future in “Ready Gas and Pills.”

You can buy print or digital copies here: https://www.asimovs.com/store 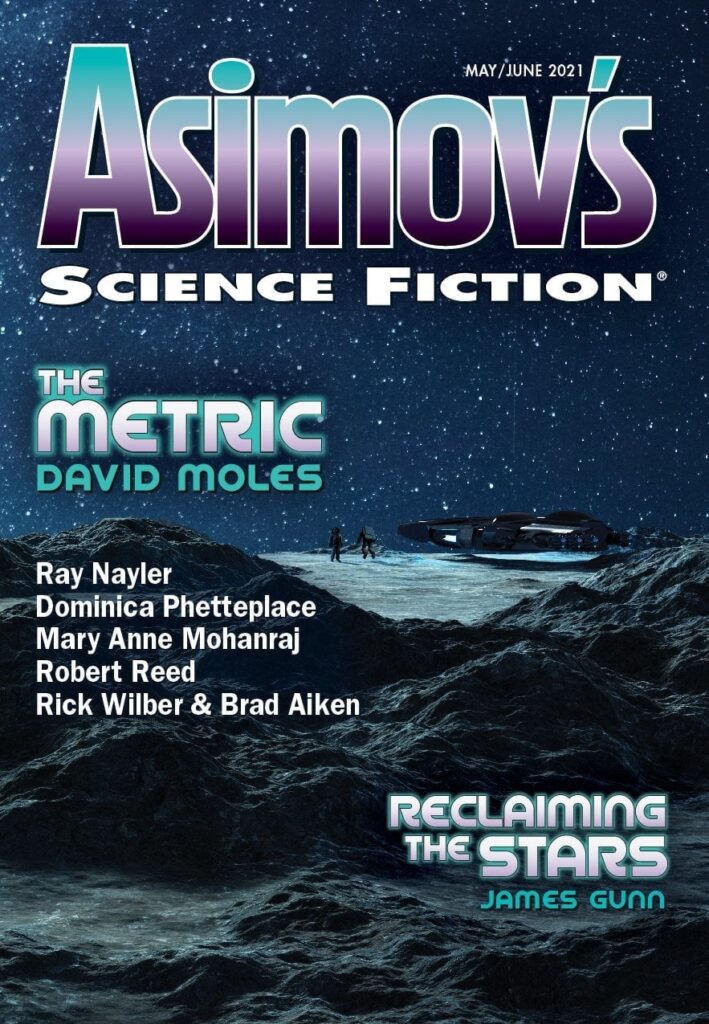