Okay, so here’s an idea I’d like to bounce off y’all. I was listening to Gary Wolfe and Jonathan Strahan’s Coode Street podcast, and they were interviewing Lisa Goldstein. A great interview, but at one point, she mentioned that her work wasn’t getting the attention it used to, and she didn’t really know why. The ‘new’ authors were getting all the attention, and she understood that, but still. (I mean, the woman won the National Book Award for The Red Magician, after all…) 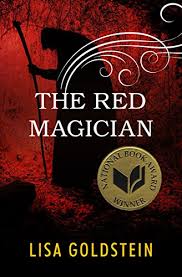 And I realized that while I’ve been a fan of hers for years, and used to eagerly wait for her novels and devour them as they came out, at some point, they just fell off my radar. And this is true of other authors too — I had a similar realization earlier this year about Nina Kiriki Hoffman’s books.

Now, obviously, I can just go catch up with both of those authors’ works, and I am, but it points to a larger question. As indie publishing has exploded the number of books published each year (and not just books — short stories, podcasts, narrative games, etc. and so on), we have a massive filtering problem.

And obviously, lots of people are working on this — there have always been review sites trying to highlight the best work, there are podcasts added to that now, there are awards, a host of techniques that surface texts. But it’s still sort of surprising to me that I had managed to lose track of these excellent authors whose work I loved.

I should never be aimlessly browsing, looking for something worth reading, when there’s another Nina Kiriki Hoffman book I haven’t read.

Maybe this problem will solve itself, as Amazon (and hopefully other booksellers) become better at tracking our preferences, letting us subscribe to authors, making sure that I pre-order the next Ellen Kushner Swordspoint novel as soon as she adds it to their system, so it will just drop into my Kindle on release day with a great trumpeting fanfare. (Your Kindle should have fireworks cascading across the screen when one of your favorite authors comes out with a new book.) (Which reminds me, Stephanie Bailey, we should make sure Amazon is set up to let folks pre-order Vegan Serendib.)

Okay, so that was a lot of preface for my question, sorry. What I was trying to figure out was whether there was anything the SLF or I could do to help with this a little. And I was thinking about the Great Conversation, which was a thing they talked about when I was in college at the U of C, the idea that academia was essentially a conversation among humanity, searching for truth, using the Socratic method to argue with each other in these texts across time and space.

And it made me want…a book club? A periodic thread to our podcast? Something where we would bring together an author like Lisa Goldstein and an author like Benjamin Rosenbaum, and maybe a brand new first novel Jewish spec fiction author and have a conversation about their work, making connections, helping to explicate how they were responding to each other.

And of course, that would all connect really well to building out teaching modules for the Portolan Project — you could sketch out a ‘Jewish fantasy’ module very easily from there, using the podcast conversation as a basis for it.

I was talking to Jed Hartman about it, and he was pointing out that the idea of the SLF doing a ‘book club’ wasn’t really scalable. But it kind of is, if you go about it the right way. Let’s say it has four parts:

1) we record the podcast / video, possibly doing it live like a convention panel, so that we can simultaneously host a Discord conversation with as many people as care to join

2) we put that up, so people who couldn’t attend live can still listen / view (forever!)

3) we find a teacher to build out the accompanying teaching module, putting together a recommended book & short story list, some study questions, and a lesson plan (ideally geared both towards high school and college teaching), and put all that up as part of the Portolan Project

4) the SLF chapters in Chicago and the Bay Area might build out actual book club segments around these (and we will hopefully have a lot more chapters and a lot more book clubs eventually….)

What do you think? I immediately run up against the problem of time — I don’t know that I have the time to really organize this well, especially as an ongoing thing.

It makes me wonder if we need more people to help, and then that runs up against the question of labor should be paid.

But also, academics are paid by their departments and are supposed to do a certain amount of service as part of that, so maybe some would be available even without my spending a lot of time fundraising for this project (which again, time is the problem).

But on the other hand, course development is really a lot of work, and I don’t want to undercut the arguments for paying for that. But maybe putting together a single lesson rather than a full course might be okay?

I’m going to take this to the ICFA (academic SF folks) mailing list, I think, and see what people think there, but I wanted to run through some of it here first. Thoughts? Better ways to do this? Aspects I’m missing?