People have been so sweet and complimentary about the cookbook, but then they say something like, “You must be so happy,” and I don’t quite know what to say. Because I am, but also, I still don’t know if we’re going to lose something like $20,000 on it, and so I’m hovering in this sort of frantic anxiety-ridden space in the moments when I think about it too much. 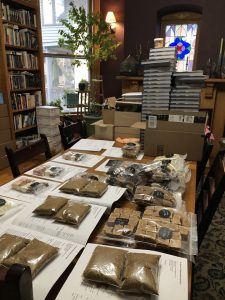 I mean, it’s fine, we’re not going to lose the house or anything if this book bombs and I end up with 2000 copies sitting in a warehouse in Kentucky. But Kev and I don’t really have much margin in our budget (we are house-poor, in that we chose to buy a big, beautiful house that we can only just barely afford on our academic salaries), so if we do lose 20 grand, it’s going to mean some serious budget stress for a few years.

He and I sat down a few months ago and had a tough conversation about whether we wanted to bet on this book. And honestly, we didn’t really know what we were getting into — it’s not as if we had intensively researched budget numbers for the Sri Lankan cookbook market or anything. We just…decided to have faith in how hard I’d worked on it, and my 25 years as a working writer and a good home cook, and take the gamble.

The Kickstarter doing so well was definitely encouraging, but maybe it just reflected my friends and family support? It’s super-hard to tell whether this book will appeal to a broader market. I just don’t know how many people are actually interested in a Sri Lankan cookbook, even if it *is* beautiful and well-done.

I’ve honestly been a little dismayed by how often I hear people saying they wish they could try my food, but they can’t do spicy or are allergic to capsaicin, so they can’t — I hasten to reassure them that in fact, you can make almost everything in the cookbook with no capsaicin at all, and there are plenty of Sri Lankans who neither like nor eat spicy food, including people in my own family.

Sri Lankan cuisine is also mostly coconut-milk based, so it’s great for the lactose-intolerant (and if you’re allergic to coconut, you can totally use regular milk instead)! It works so well for vegetarians and vegans too, both in the fact that most of the book is already in that category, and that almost all the meat / seafood dishes convert easily to vegetarian…

But I can’t personally talk to everyone who might otherwise be interested in the book! I hadn’t realized “Sri Lankan food = super-spicy” was such a pervasive idea. I mean, it *can* be. But it doesn’t have to be!

This coming week, Mascot Books is going to take my cookbook to big buyers. Barnes & Noble, Books A Million, Costco, etc. This is one of the main reasons I chose to go with a hybrid publisher, instead of just doing an offset print run with a printer directly; Mascot has industry contacts I don’t, and I honestly have no idea where I’d even start with trying to set up a meeting with Costco! (I actually think this would make a BEAUTIFUL Costco gift book. Will Costco think so? I have no idea.)

I’m also talking to Mascot tomorrow about buying some more publicity services from them — there’s a lot I can do on my own, but there are things they can do that I can’t easily, that will amplify our reach. So maybe another $2000 invested there. Which is, frankly, nerve-wracking. (You may have seen me talking about doing a Buy Nothing January? There’s a reason. I was also thinking of spending the month trying to feed my family well, as cheaply as is manageable with our daily lives, and documenting it all.)

I’m just feeling in limbo right now. Part of me wants to run out and pick up a part-time job as a cashier every time I see a store advertising such, just to have a little more money coming in, to counter all the money that’s gone out and is still going out. That’s REALLY not a good use of my time, when you think about hourly rates!

I probably shouldn’t be making so many bath products either, because I’m not even sure I’m breaking even on those, much less making any money. Kavi was doing them with me, and she started calculating how much it would take for her to make a profit making lip balm and selling it to her friends. She didn’t think the numbers were very good. I do like the creative aspect, though, and doing something with my hands, and blogging about it, so maybe it’s okay if making bath indulgences doesn’t make money.

Better if they don’t lose money, though. And I have to be more disciplined about doing the things that actually do make money, like writing essays and stories and sending them out. And publicizing publicizing publicizing the cookbook. I spent an hour or so on that this morning, and I probably should spend an hour every morning from now until the end of time. Or at least for the next few months.

Mascot sent me a guide for publicizing indie-published books, and I’m going to sit down with Pem and Stephanie on Wednesday to review their recommendations (actually, maybe I should ask them to look at it in advance), and decide what on there we actually want to do. Me being able to keep paying my very part-time publicist & assistant is dependent on this cookbook actually making a profit, so that’s the main thing I should have them helping with.

I *am*, of course, delighted that people seem so happy with the book. I *am* really proud of it, however the money works out.

But if anyone wants to whisper praise for it into the B&N book buyer’s ear, I’d be okay with that….