What is the difference between a ‘chef’ and a ‘home cook?’ I found myself protesting (as I gorged on crispy delicious fresh-made lumpia) to Chef Estanilla at his pop-up for pig & fire (having given him and his wife Jen a copy of my cookbook that they were browsing) that I wasn’t a chef, I was just a home cook. 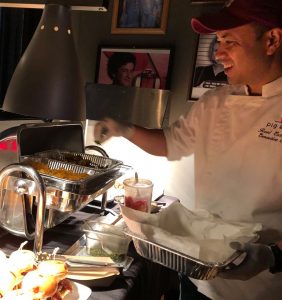 I actually think that’s true, but I realize also that I’m not sure what the distinction is in my mind.

I’ve never gone to culinary school, certainly. I’ve read a lot of cookbooks! I’ve taken a knife skills class, but just the one, populated entirely by suburban couples doing date night, like us, and I didn’t actually change the way I used a knife, so serious chefs would laugh at me, I’m sure. (It actually makes me anxious about doing cooking videos for Feast, which is probably why I’ve been avoidant about them.) (Oh, just remembered, I took a canning class too. That made me less worried that I might accidentally poison someone!)

I was about to say I’ve never worked in a restaurant — but that’s not true; I’ve been a cashier and dishwasher at a pizza joint (one of my first jobs as a teen), and a waitress at a truck stop pancake house (where the truckers tried to stick tips down the front of my uniform, gah). I’ve also catered a few rather random events (back in college, for my dorm, and for a friend’s parent). But I don’t think I’ve ever cooked in an actual restaurant, and I have no formal cookery training.

When Melissa Elsmo was interviewing me, I mentioned that when I was first cooking in my mother’s kitchen, all she would let me do was chop onions (telling me every time that I wasn’t doing them finely or carefully enough) and sauté them (she’d get annoyed that I let them brown too much — in her defense, it was true that I was usually reading and stirring at the same time, which honestly don’t go all that well together…). Chop onions, sauté onions. Every few nights. For years. And Melissa laughed and said that was actually pretty much what the beginning of culinary school was like. So maybe my training wasn’t exactly ‘formal,’ but…

We would stay up the night before a big party, often ’til 2-3 a.m., helping my mother cook, rolling endless mackerel cutlets in egg and bread crumbs, crimping endless chicken patties. My mother, her sisters, me and my sisters, all crowded around the dining table, which was slightly too big for the room, so you could barely wedge yourself in or out, but it didn’t really matter, because you were going to be there for hours regardless. At least the gossip was fun.

I can cook dinner for 200 without worry, but I wouldn’t even know where to go to get the heat lamps to set up the kind of pop-up event Roel was doing tonight (conveniently at the Beer Shop a blocks down the street from me). I kind of want to work for him for a night, for free, just to learn the ropes. So many things I don’t know!

And yet also, so many things I do!

I met a woman a few days ago (at the Kickstarter Sri Lankan + bagel event I hosted for Amanda Daly‘s upcoming Daly Bagel shop) who works doing food development for a major corporation, and I mentioned, only half-seriously, that Roshani and I had talked about putting Sri Lankan curry powder in stores. And that it frustrated us that there was so much Asian packet food at Whole Foods that we didn’t think was actually very good. (Use Maesri curry paste if you’re making Thai curries from store-bought paste, and Chaokoh coconut milk.)

The freaky thing was, instead of dismissing the idea, she said we could totally do that, and she’d be happy to advise. Which was a terrifying thought. And Amanda chimed in and said something about how people thought this stuff was more complicated than it was, and she should know, since she’s actually opening a brick-and-mortar business, so I suppose I should trust her, but eep. Surely not!