This was ALMOST very frustrating. I grilled these beautiful jumbo shrimp with chili-salt-lime, thinking I’d make a sort of mango-shrimp salad with them. The shrimp themselves were fabulous; I ate three of them straight off the grill pan because I just couldn’t resist. But when I chopped them up and combined them with chopped mango, the result was v. disappointing. The mango was quite green, and somehow the end version was just meh. I hate eating meh food. It was late by then, so I went crabbily to bed, complaining to Kevin that I’d ruined the shrimp. 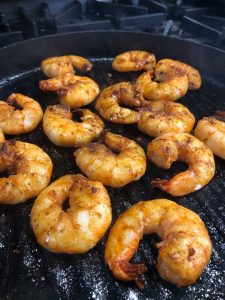 But in the morning, I took another stab at it; I pulled the chopped shrimp and mango out and put them in the food processor, figuring I’d aim for more of a spread, rather than a seafood salad. I added some mayo and processed a bit — better. But the seasonings seemed off — it needed more lime, more salt, and something sweet. Mango jam to the rescue — mango chutney would’ve been even better, I suspect, but I was out of that, and I had a bit of the jam left.

I don’t have a picture of it, but the end result was respectable enough that people at brunch were complimentary and asked me what was in it. Whew. Rescued! This is the result of 20+ years cooking, you know — ten years in, I don’t think I would’ve had a hope of knowing how to fix this dish, which would have been very sad!