Game Design week 5. Let me start by saying that Anand spontaneously said this morning, “Mommy, I really like your game design class.” Awww. That’s why I’m doing it, kiddo. (Kevin, let’s talk about co-teaching it next semester, on a Tues or Thurs, since we’re on the same teaching schedule at UIC. I’m thinking we do strategy games (chess / go) and board game design?)

And also, yesterday in class, one of the kids said that if I did this again, he though that lots of kids would sign up for it, because a lot of kids were sad that they didn’t get to take it. So I think it’s going well, and we’re hoping to offer it as a trial summer camp next year for Maram.

I’d really like to have it offered more broadly than just me teaching it — I think one 10-student class per semester is about my limit — so locals, if you’re interested in teaching game design at your elementary or middle school, or teaching it with us at Maram next summer, let me know?

I’d be very happy to share my course materials with you, and talk through what I did, step by step. I can even teach you how to play a RPG or Pokemon if you don’t already know how to play — it’s really simple. Maybe 2 hours on a Saturday to go through it all? Ping me if interested!

Okay, on to the recap.

This week, we transitioned out of RPGs to card-based games — the kids were super-excited to try Pokemon. I opened by asking how many knew about Pokemon (all of them), and how many had already played (3 out of 8). 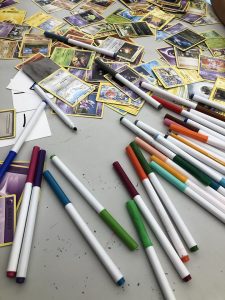 The ones who had already played, I got them started with designing their own cards (for Pokemon or otherwise) at one table — very free-form, and they were happily occupied for the whole class. I’d made trading-card size blanks for them in advance out of card stock with a paper cutter — 3 each, cut to 2.5 x 3.5. I definitely needed some extras for the perfectionists in the group! 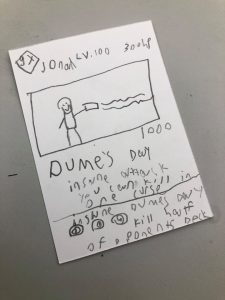 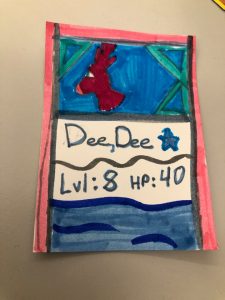 Then I played the opening of a demo game against my son (who learned how to play the day before), talking through what was happening, with the rest of the kids on his or my ‘team’. That took about 15 minutes. Once they had the basics down, I asked them if anyone wanted to finish the game with my son, and one kid did, so they spent the rest of the time playing through the game, while the rest dispersed to go make their own cards. 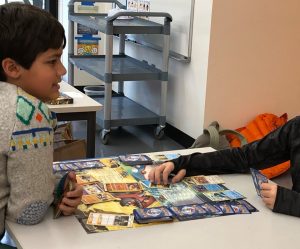 Next week, the plan is to bring some more ready-made decks so that they can all play through, inserting their own cards into the decks. And then we’ll talk about what makes a game fun, about the problem of overpowered cards that ‘break’ a game — one kid’s card has 1 million hit points, for example, about how to maximize fun for everyone involved, about how randomness affects game play (whether it’s a dice roll in a RPG, or a shuffled deck in this kind of game), and the right ratio of energy to active cards for Pokemon (which we’ll carry through to discussing mana and active cards when we play Magic: the Gathering the following week.) 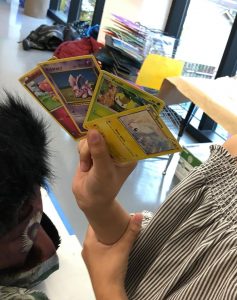 The kids got to take home a few Pokemon cards for fun with them — pictured is one student who chose her cards based on their cuteness factor. Cuteness is very important in game design!