(cn: This is a fairly gender binary post in my approach, but I want to acknowledge up front that I am sure these issues affect non-binary people in interesting ways; I don’t know enough to be able to comment on those aspects.)

On the back of my office door, I tape up cool cards friends have sent me. It’s accumulating nicely, a mix mostly of birthday and cancer-recovery cards. But I think a good half of them at this point are from Jed, who has gotten into the habit of leaving little cards for me to find after he visits. It’s funny, by this point I know he does this, but it’s often a few days after he leaves before I go into that office to work and find them, and so it’s always a delightful surprise. 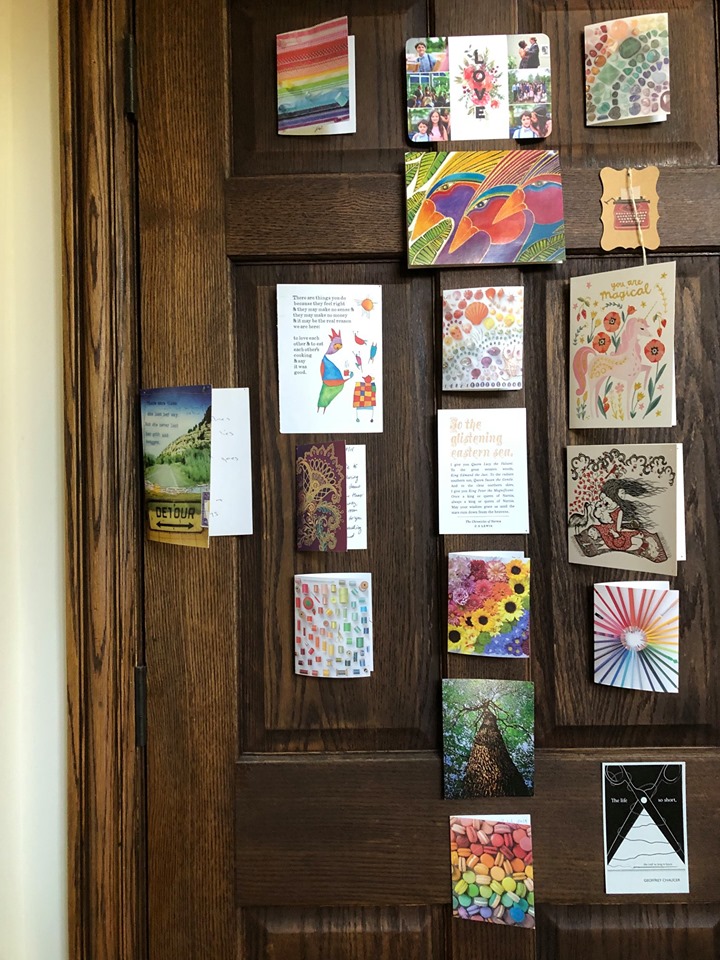 I’m noting this because it’s a great example of emotional labor that men mostly don’t do. Why bother with leaving little notes, thank you cards, birthday cards, etc. and so on? I just received a birthday card in the mail, from a friend whom I didn’t expect a card from, and she and I had had a little bit of a difficult time some months back, and though we’d sorted it out, it was particularly soothing to get the birthday card with the nice little note on it. Reassuring that we’re actually okay.

I’m not as good with thank you cards as I’d like to be, and we’ve totally failed so far on teaching the kids to do them, and it bothers me that we’ve been so bad about it, because I think it’s important. Especially for our son.

Jed didn’t used to do this kind of thing, but he started at some point, I think as a deliberate effort to do the kind of emotional labor work that men mostly don’t do, and you know, it works. He has put in effort and time and care into doing something sweet for me. It actually makes me love him a little more.

I had a series of conversations / arguments with Kevin and my prior boyfriend, Paul, about giving flowers, and I think that falls into the same category. Back then (we were all in our early-to-mid-20s), I think the guys saw giving flowers on birthdays and such as inauthentic, as a formal thing that you were being coerced to do, and therefore meaningless. They thought if you gave flowers, it should be a spontaneous gesture of affection, to be worth anything.

But if you wait for the spontaneous gestures — well, they’re lovely, but life is busy, and we are all being ground down by capitalism, sexism, etc. and so on. The little ritual gifts of cards and flowers and cups of tea (which, sure, I could get myself, but it’s SO MUCH NICER when someone I love gets one for me) — in small ways, they build a little insulating warmth between our fragile selves and the cold.

It’s good for our relationship, that Jed leaves me these little cards. It makes me feel warm and fuzzy for a moment, and that warmth lingers. This is generally how friendships form, according to the research I’ve seen — lots of little pleasant interactions, and over time, they build and you bond. Kith networks. Kith = one’s friends, relationships, and acquaintances.

Women who drag themselves to their kids’ playdates and have coffee with strangers know this. Women who hang out at the kids’ birthday party at the bounce place, making conversation with the bored parents, helping them be a little less bored. Women who volunteer to set up balloons and cake at the PTO meeting. I can’t always bring myself to do this kind of thing; sometimes I just can’t cope with more awkward conversations with strangers. But when I do, it’s generally rewarded — not necessarily in the first instance, but over time. It’s a slow process; it helps to have a little faith in the overall structure.

Too much of the time, we don’t teach boys & men to do this work. That is a great failing of our society. The boys say it’s hard, and they don’t know how, and we let them off the hook. It leaves the labor of kith-building to the women, which is time-consuming and deeply unfair, but also, it betrays the men.

Because once those men are out of college and other environments that offer structured repeated interactions, they often don’t have the tools to make more friends. The thought of going to a meet-up group and talking to strangers sounds awkward and terrifying. Many men don’t realize that it is just as awkward for women; it’s just that at least some women were trained to do it young, and that helps a little. They have the experience that tells them that it’s worth coping with the awkwardness, because there’s a good chance it will lead to friendhship.

(To be clear, there are women who haven’t had this experience either — whether it’s due to their own perhaps introverted personality, or racism, ableism, geekery, mental health issues, etc and so on, there are women who have not been able to work through this process successfully, or if they’d done it a few times, not reliably. It just seems to me that on average, more women are perhaps forced to learn how to build kith networks, because society requires it of them to function. For better or worse.)

If people who don’t have the skills to build kith networks are lucky, they have close family as support. Many don’t.

And even if they do have close family, that’s a lot of leaning on a few people — as humans, we do better when we have a wider net of support, generally. If you look at the research on older men, and their happiness and quality of life, especially once they retire, the extent and strength of their friend networks is key to this.

And so here we are, in my late 40s, and half the age-mate wives I know are worrying about how few friends their husbands have these days, and it feels ridiculous that we are essentially trying to arrange playdates for them — “Does your husband like beer? My husband likes beer!” — but this is what we are left with…