Stopped for a little French snack at Léa (which is now serving dinner too, apparently — looks tasty). I picked that restaurant because it was a) on our way to the post office, and b) Kavi’s outfit looked very French that day.

They decided they quite liked pan au chocolat — I thought the bittersweet chocolate might be a little too bitter, and Anand was initially suspicious, but in the end, it was all devoured. Kavya loves chocolate in all its forms. 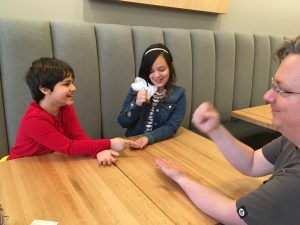 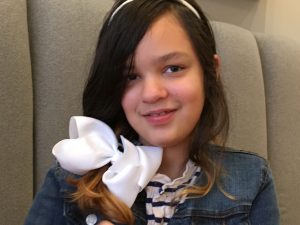 After the post office, we stopped by the library. (Anand: “Mommy, is this the library you own?” His concept of a trustee is a little muddy. But in some sense we all collectively own our public libraries, so not so far off as all that.)

The kids loved the current Idea Box exhibit, which features artwork from various local elementary schools. Their favorite was the three dimensional piece they’re pointing at in the second pic, which I was pretty impressed by too. Anand was, I think, a little jealous of his classmates who had work selected — “I didn’t know the art was going to go into the BIG library!” Something to aspire to, kid. 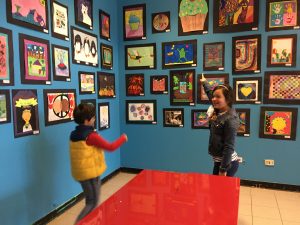 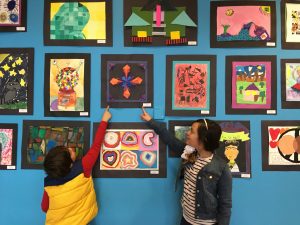 Stopped at Cafe Descartes (on Lake, next to the movie theater) for samosas. Nicely spicy; Kev and I got one heated up to share there (it was a bit chilly walking around yesterday late afternoon), and the fancy presentation startled me.

🙂. Also three in a bag to take home with us — should’ve gotten more, as they were quickly devoured.

We’d just missed the last mango lassi, which disappointed Kavi, so clearly I will have to take her back sometime soon. The kids got to split a cookie liberally coated in sprinkles, so don’t feel too sorry for them. Love having a local coffee shop that also serves samosas and mango lassis. Looking forward to their Saturday Punjabi pop-ups returning this summer! 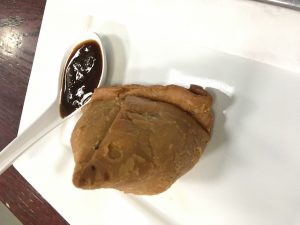 Anand was getting restless by this point in our peregrinations, so Kevin walked him home while Kavi and I dealt with bank stuff. I had various little things to do with my business writing account, but the big thing was finally opening Kavi’s first savings account, which we’ve been meaning to do for forever. She’s been carefully accumulating her birthday and Christmas money. Picture: Kavi endorsing her first check! 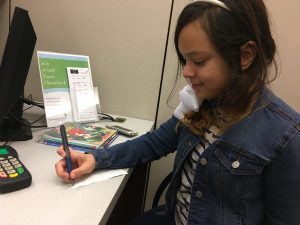 After opening her bank account, we wandered around shopping for a bit, until I got too cold and tired and needed to head home.

Kavi: “I could shop forever! I could live in the mall! If you wanted to take me to the mall and leave me there, I’d be fine with that!”

Although she did say that it was a little frustrating going to shop after shop and not buying anything because things were too expensive for her budget. (I should show her that Gilmore Girls episode where Rory and Lorelei are too skint to shop, and try to go window shopping instead, and find it is not nearly as much fun as they had hoped.) Kavi wasn’t ready to spend any of her newly-deposited bank money on a $24 pair of sunglasses, no matter how cute they were. Eventually we stopped in a store that sold $2.50 sparkle tattoo pens, and Kavi picked up a few; she went home happy.

Pictured: We stopped at 16 Suitcases (such cute clothes!) and Kavi discovered a notebook that matched her outfit. She has a thing for notebooks right now. I don’t know what she’s putting in them, but she’s going through them at a furious rate. Ironically for this photo, she prefers notebooks *without* lines. 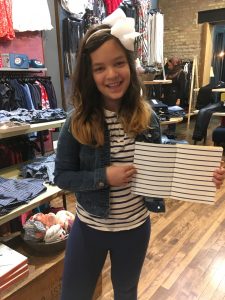