This is a surprisingly cute picture of us given that I actually feel kind of terrible. I guess all the smiling practice for selfies over the last few years is effective? If your goal for photos is to look pretty and happy, maybe not so much if your goal is to accurately have your outsides reflect your insides. 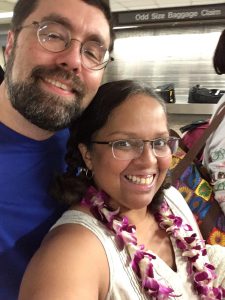 The flight itself was mostly fine, except that I had decided to spend the 9 hours of it churning through e-mail, so that I could get through all the backlog and enjoy Hawai’i with a clear conscience. I even paid $27 to United for the privilege of having internet for the whole flight — but then the connection was so incredibly bad that I got maybe 2 hours of usable internet out of that. I got through about a fourth of the e-mail, which is progress, but it was all intensely frustrating as I kept trying to do things and then having them not take, and need to be re-done. There have been a lot of tech difficulties lately.

It wasn’t all bad; I did read all of Mississippi Roll, the latest Wild Cards book, which was both enjoyable and necessary research for keeping up with what’s happening in the Wild Cards universe; it’ll help me with my revisions for my next story for George. And I spent a solid hour or two playing a dumb phone game, which I guess maybe I needed? I have been feeling super-tense and harried for some time now, and I have got to figure out how to chill out. It is hard, because I really want to do all the things. But I might implode.

Jed met me at baggage claim and put an orchid lei over my head and that was lovely. And he arranged everything for this trip, so I didn’t have to make any decisions at all, and that was even better, esp. since he doesn’t actually like making decisions, so it was particularly nice of him.

Normally I don’t mind doing that kind of planning, but I feel like my brain has been so incredibly full of planning lately that it’s going to melt if asked to plan one more thing. Kev and I talked about inviting people over for Christmas dinner, and I really like roast lamb with mint sauce at Christmastime, but I just couldn’t even cope with the planning involved for that. I am out of cope. I have used up every last little bit of cope.

I was going to write something about me and Jed and the 20th anniversary trip to Hawai’i and oh yes, poly. But I think that needs to be a separate post, because this one is full of stress, despite the smile on my face. Breathe. It will get better from here.

I’m still mad at United, though. I kind of want a refund on my $27, and maybe a complimentary drink in apology.