The unseasonably warm weather meant that we broke out the grill. I’m a good cook with curries and such, but I need more practice with the dedicated smoker grill. I think bigger shrimp would’ve worked a bit better — these got slightly dried out (but fine in sauce, and will be fine mixed in a caesar salad with dressing). Everything got tossed in olive oil, salt, and a generous amount of white pepper. 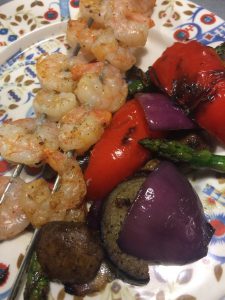 I put all the veggies in a grill pan, which was okay, but they didn’t char that much in there — I think next time, I’ll keep the eggplant slices, red onion, and bell pepper pieces big, so they can just sit on the grill directly. But the grill pan was good for the asparagus, carrot pieces, and mushrooms. 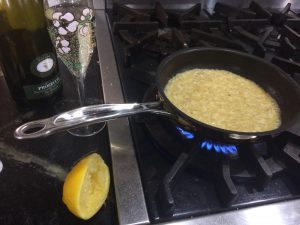 I’m mostly just being finicky. Overall, it was delicious and very more-ish. I had planned to toss the veggies in balsamic vinegar, but we were out! But it wasn’t too hard to make a quick lemon-mustard sauce, delicious with a glass of prosecco.