Menu
Elsa costume, part 1. Now, why did I compelled to start the trickiest part first, when I was already exhausted? I have no idea. The idea was to start with a light blue leotard for a base, and then see if I could turn some stretchy bling-y fabric into a ice queen bodice. I'd found this gorgeous little bit of embroidered ribbon, very Arendelle, but wasn't sure I should use it since the sparkly fabric was sotacky? loud? But Roshani﻿ actually held them together, and somehow, it worked fine; the ribbon actually made a nice transition to the pale blue leotard. So okay, design good. Next step, sewing down the ribbon. 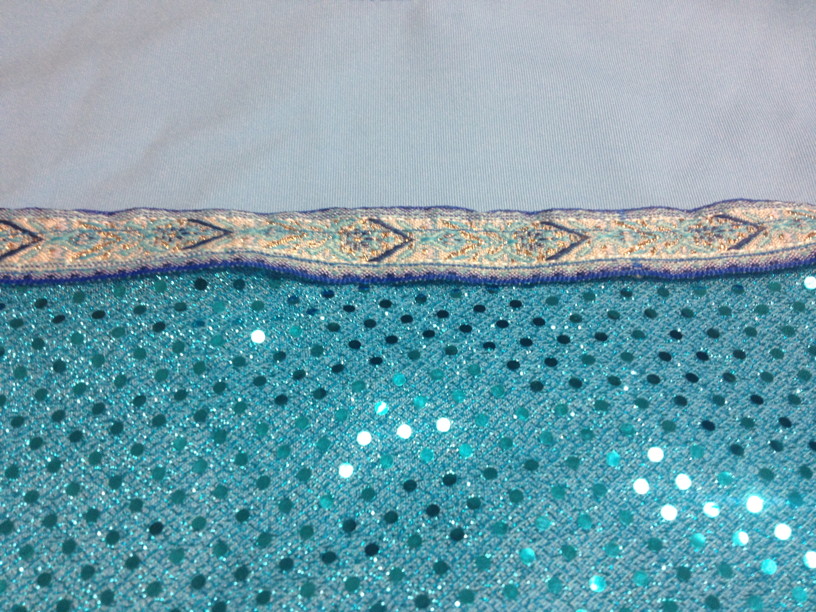 Biggest mistake happened here. I tried just sewing down the middle of the ribbon, thinking, oh, it's just a costume, I don't have to be precise and fussy. That is pretty much always a mistake with sewing, I think. Because the ribbon curled like crazy when I did that, and I ended up having to cut the whole thing off and try again. Argh. But this time, I a) pinned it, and b) sewed down first one long side, and then the other, of the ribbon, and thus, it lay flat. I didn't iron anything, because it's a costume for a seven year old, so I was still being somewhat lazy. And you can tell. But no one will care, especially not Kavya.

Stretchy fabric is a pain in the rear to work with, did I mention? I would like to stick to cotton from now on.

Then I hemmed the sides and bottom, and I had a lovely little rectangle. The original thought was to just sew it closed into a tube that she could pull on, but a) I wasn't sure it would fit, and b) that's not very princess-y. So I googled various closure options, and found that stretchy hair ties are actually super easy to use for closures. I raided her stash, found four gradating from white to blue, and just pinned them evenly and then sewed them down in a straight seam. Aside from their tendency to spring away, easy-peasy. 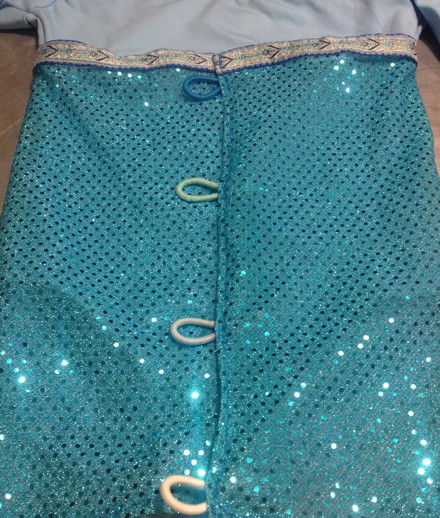 Now, I was going to sew down some buttons on the other side, and just loop the closures over that, but I thought I'd best try it on her first. Luckily, she had gone to bed, but only just, and was still wide awake. When I tried it on, I found that it fit just fine through the chest and stomach, but it was long enough that it flared at the hips and tush, and while I *could* sew down a button, it would pull and gape unattractively. Option two would be to just cut off the bottom, re-hem, and have the bodice end at the waist. 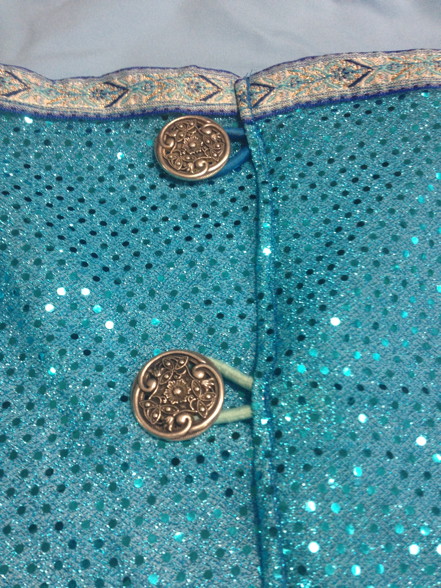 Which is a fine option, but I really was hoping to do something slightly nicer. And so my plan for tomorrow (when I am less sleepy and able to be precise), is to line up a second set of matching hairbands on the other side, sew them down -- and then use that to lace a ribbon through them for a corset closure. VERY princess.

I think Kavya will be pleased, although the funniest part of it all was that when I took the bodice up to her to try on, rather beaming with pride in myself and my novice sewing abilities, she was entirely blas about the whole thing. Very oh yes, mommy, it's pretty, but let me tell you about what Anand just said, which is much more important. She takes my ability to whip up an Elsa costume for her entirely for granted.

Which is, in its own way, perhaps even more of a compliment. Or maybe not -- maybe it's just that parents are automatically assumed to be able to do anything. It's nice to have someone believe in you so strongly. Let's hope I don't ever let her down.