Facebook Instagram Youtube Twitter Patreon Shopping-bag
Menu
Yesterday, I was up to 12,000 words and the end of chapter 3. This morning, I changed chapter 1 to a prologue (not sure if that will stick), ripped the other two chapters apart, and wrote a whole bunch of new stuff. Mostly history, and I'm worried that it might be info-dump-ish, or just dull, but hey, it's new, and it's there on the page. That's progress, I'm pretty sure. Then I took a break to hang out with the family.

What family, Mary Anne? I thought you had abandoned them to go focus on you you you. Or at least your book. Also take long walks among beautiful prairie flowers, swim at the beach, and eat fabulous chef-prepared dinners.

Well, all of that is true, my darlings, but I also told Kevin that if he and the kids were bored today, I'd be happy to see them. I missed the little monkeys. So he brought them up (we live about an hour's drive from here), and I showed them around the house and grounds (I would say 'garden', but it's more than a garden, really, it's grounds. I mean, look at their birdhouse, for example!). 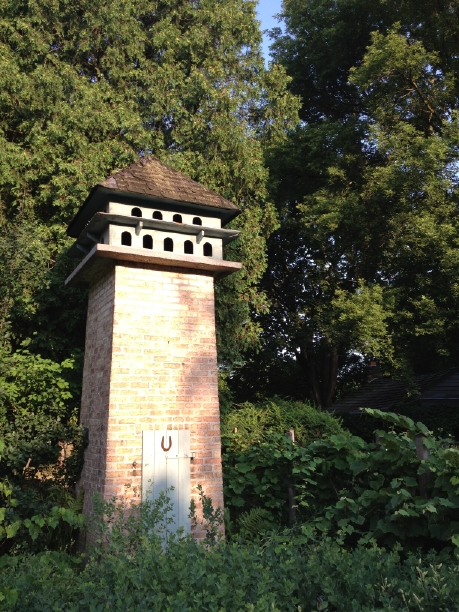 They even ventured onto the prairie a bit, although I think Anand was intimidated by all the plants taller than he was. There are paths, but it still must be a bit scary when you can't see above them. Like walking through a maze, not sure where you're going to come out. I ended up carrying him on my shoulders quite a bit as we wandered around. Kavi did like racing up and down the paths, and didn't seem to notice that no one was actually up to racing against her. She won a lot. That was all lovely.

After that, drive into town, get some pizza and spaghetti, which kind of took forever, because small children are not fast with spaghetti. It was okay, but I admit, I was perfectly happy to send them all home again after that. I got my small child fix, my snuggle, and I was good. They seemed reasonably good too, although Kavi did want to know exactly when I'd be home, and why exactly I was here. I said "You know how sometimes you're working on an art project, and Anand keeps wanting to play with you, and it's annoying because you're trying to concentrate? (She takes her art very seriously.) "Well, mommy's working on a big project, and I came here so I could concentrate on it for a while." That seemed to go over reasonably well. Anand just wanted to stay and play, but I think that had as much to do with it being a new and exciting place as anything else. Kevin is coping fairly well with them (with his visiting mother's help) except Anand is really striking on the sleep front, which is unfortunate. Hopefully the kid fell asleep in the car going back, at least.

Kevin is somewhat envious that he can't come here and do math. They don't take mathematicians, which is a shame, because I would totally watch the kids so he could come be creative and awesome with his math stuff. We really ought to research some math residency things -- they do exist, he says -- and figure out if he can do them. Although I'm betting math residencies aren't typically in as pretty places as artist residencies are. Though they probably should be. Beauty is inspiring!

After they left, I wrote a bit more and got to the end of the new chapter 3 (which, if I'm counting right, means I added a chapter's worth), taking me to 15,235 words total and four reasonably solid chapters. Then a break for an hour; I watched the first episode of Upstairs, Downstairs on Netflix, because I've been meaning to check it out ever since the Downton Abbey frenzy. (I think I was in the mood for that sort of thing because Lake Forest is just so wealthy, especially where we are by the lake -- there are massive houses with massive grounds everywhere, and a few honest-to-goodness estates.) U,D was good, although not as pretty as Downton, unsurprisingly.

And then a half hour playing poker for jellybeans with Mike and Ann, which was fun, and then a leisurely dinner with chatting, and then at 8, back to work for two hours. The next chapter went pretty smoothly; there wasn't TOO much to fix in revision, so now it's done, and I'm up to 18,251 words. This is starting to feel properly book-like. Awesome.

I am honestly sort of spooked by how well this is going so far. I expect an anvil (of some kind) to fall on me soon.