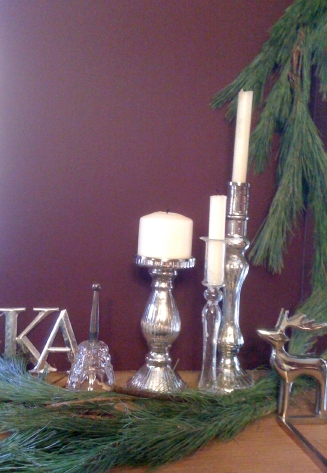 No, I didn't escape this year's frenzy for mercury glass. In my defense, I started collecting some last year. Oh well; it's awfully pretty, and fits perfectly with our modern-Victorian style. Letters from RH last year -- it's convenient that they stand for Kavi and Anand, but also for Kevin and Amirthi (my middle name, and what my family calls me). Little crystal bell found for a dollar or two at an antique store. Reindeer is only the first of several -- I'm afraid I was a little obsessed with deer and stars this Christmas. They're everywhere. 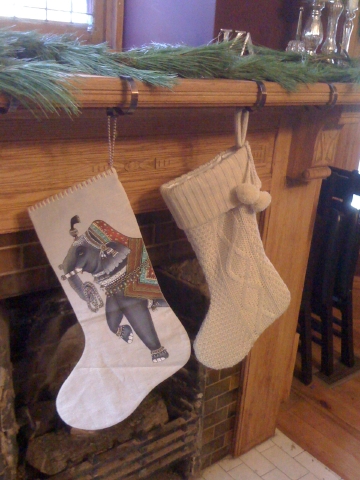 That's my elephant stocking, though I shared it with Kevin this year because we have so many stockings. I'd like to sew him one next year out of a cream / grey / red plaid -- a nod to the Scottish part of his heritage without actually using his McLeod tartan, because it's kind of ugly, sadly. I think Kev's actually more German than Scottish, but we can incorporate some German traditions another way, no worries. The cream knit stocking was Anand's, from Target. The elephant is by John Robshaw, part of a series he did with a camel and a circus horse; I found the elephant on clearance last year and was very happy to use it this year. :-) 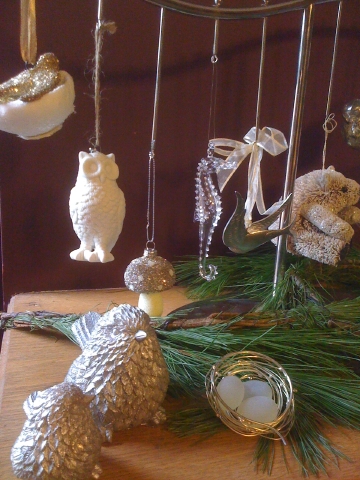 I have lots of little silver and crystal ornaments, most quite fragile; they're on two stands I picked up years ago at Crate & Barrel, well up out of the reach of little monkeys who like to break things. We only lost two ornaments to Anand this year, which is quite a triumph, I think. 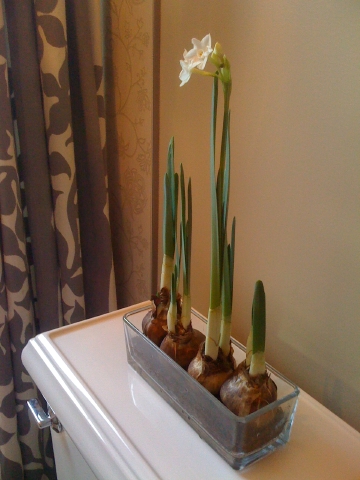 I grow paperwhites every winter -- love them. I had a dozen scattered around the apartment this time around -- next year, two dozen! :-) I also have a white amaryllis which I neglected to photograph, but which is doing splendidly -- I didn't used to like amaryllis, but they've really grown on me, especially the way they give you months of slowly-opening blooms in the dead of winter. 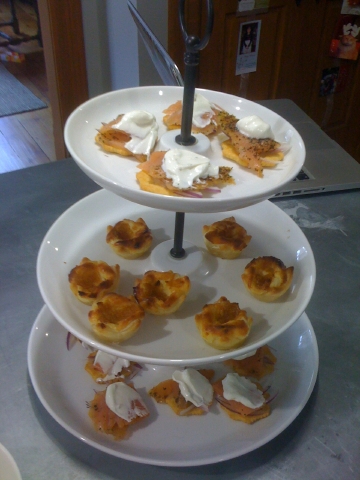 Top and bottom layers are cracker / red onion / smoked salmon / sour cream. I meant to add capers too, but apparently, we'd used them all. Middle layer are little caramelized onion and cheese tarts from Trader Joe's, which I'm just addicted to. They're SO good. 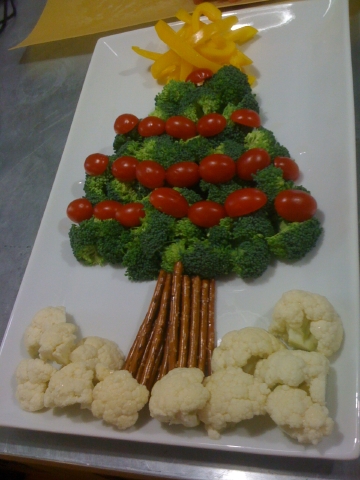 Veggie tray, inspired by Pinterest, assembled by my sister Mirna. I forgot to make dip for it, though. Oops. As a result, mostly, this went uneaten. Sad. But it did look cute. :-) 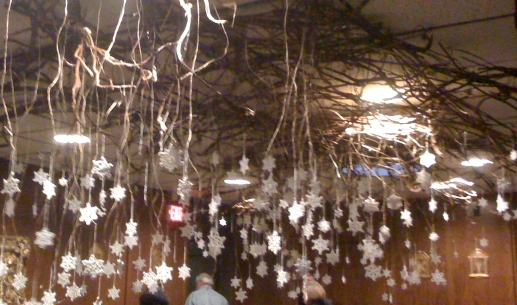 Ornaments at St. Edmunds church; my parents wanted to go to Mass. 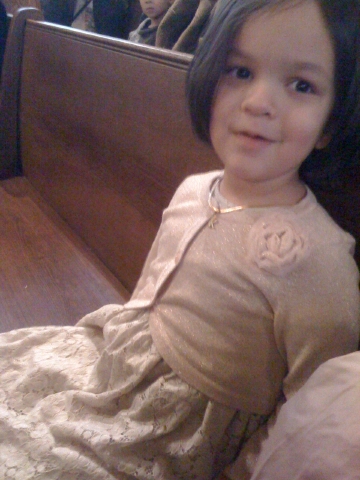 Kavi was very good for the first half hour of Mass, and then she started to lose it. I tried bribing her with chocolate, but that only lasted so long. In the end, I took her home early, and then came back for my parents. 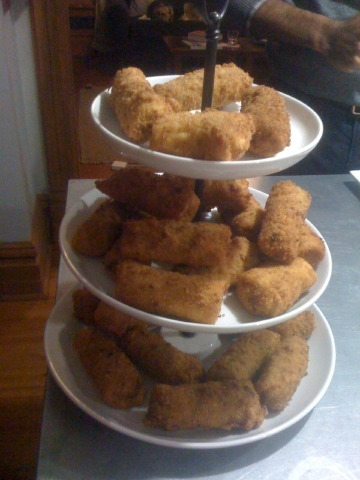 We made rolls for Christmas Eve dinner -- so delicious. A little bit of a pain to do, which is why they're reserved for special occasions. Also because they're probably five hundred calories each. But yum yum yum. I had three. 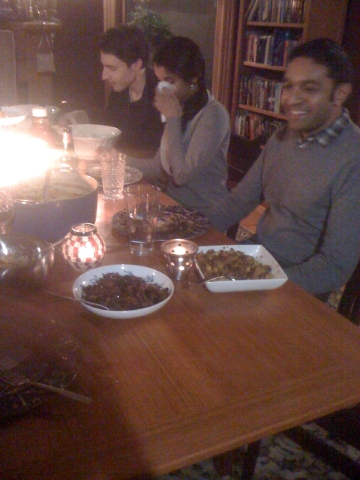 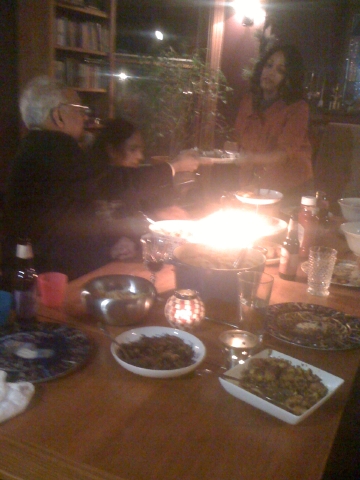 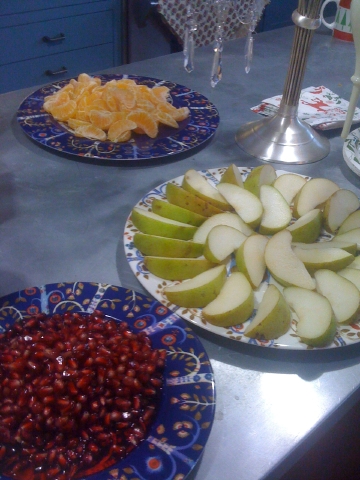 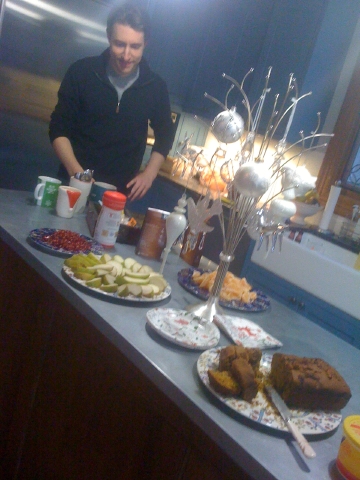 Christmas morning, Ryan with fruit. Kevin's mom always puts up cut-up fruit for Christmas morning, before opening stockings; it seemed like a good idea, so we did that too. After stockings, brunch, after brunch, main presents. Worked well! Banana-walnut-raisin bread brought by Ryan's mom, Annmarie, who stopped by with his sister Katie for a while on Friday, which was lovely. They also brought an apple pie cooked by his dad. Yum. 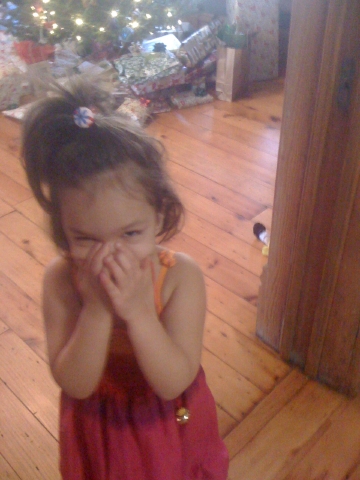 Christmas morning, Kavi very excited by the presents. Anand was here, I swear, although I seem to have completely missed him in my photos. 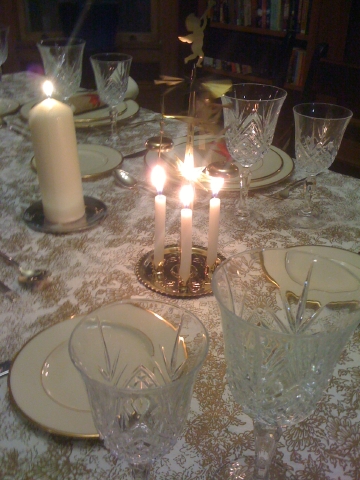 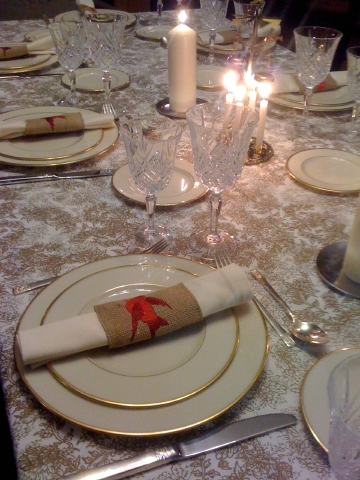 The angel chimes were sent by Karina last year -- the kids were quite enchanted by them, and honestly, the grown-ups were too. Heated air, spins blades, makes angels chime -- it's like magic.

The tablecloth is by John Robshaw, on sale, hooray. My favorite part of this year's setting are the napkin rings -- they're actually a long burlap ribbon, with wire on top and bottom, that I cut into squares and folded over around the napkins. I would link to the ribbon, but I bought it at a local store, Bramble, and I don't know what it's called. I didn't have time to sew it closed before Christmas, but I think I will after, in some fashion. Velcro would make it easy to open and close, but feels not in the spirit somehow. Maybe just finish the raw edges (hidden underneath right now) with bias tape? I'd like to preserve it for future dinners. :-) Thoughts welcome. 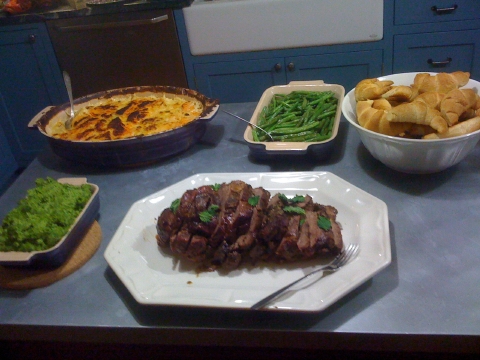 Christmas dinner: roast lamb (overcooked, sadly), minted pea puree (decent, but not exciting), scalloped potatoes and sweet potatoes (watery, but okay -- should have used cream instead of a milk-flour mix, I think), crescent rolls (everyone's favorite :-), sauteed green beans (fine), and not pictured, salad with clementines, beets, goat cheese (good, I think, although I somehow didn't actually have any). Not my best meal, I'm afraid, but it was very traditional. British food isn't actually supposed to be good, right? Right? 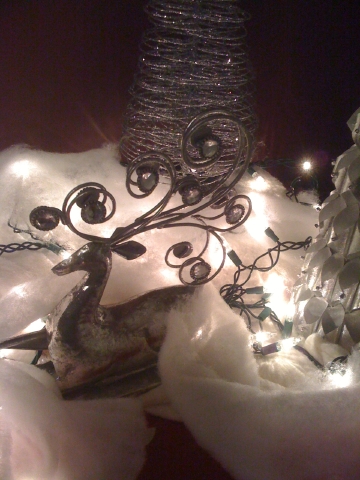 Yes, more reindeer. I warned you. And the rising of the sun, and the running of the deer..." 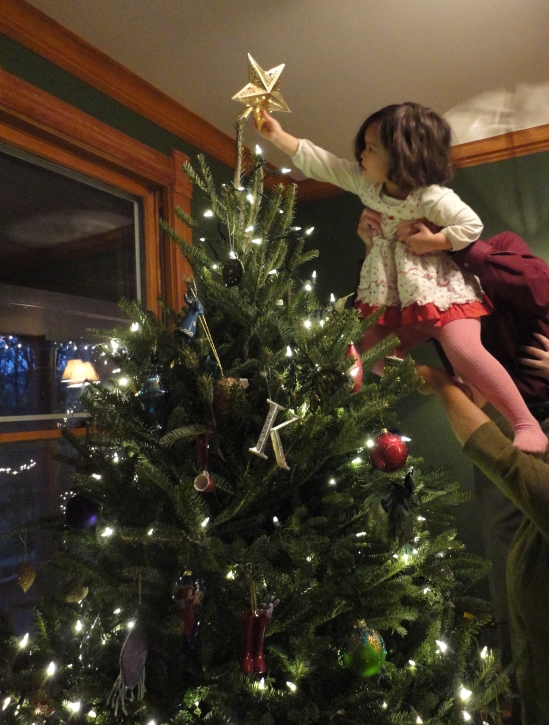 My favorite photo of this Christmas -- Kevin's dad, Ron, lifting Kavi up to put the star on top of the tree. She was quite insistent that she got to do it -- I'm glad we managed it!