New toilet in the powder room. We'd hoped to re-use as much of the old plumbing as we could, but after winters in the garage, much of it was cracked, sadly. This is a new toilet, the Memoir from Kohler, which is pretty, but it turns out a little high for me. It's okay, but vaguely annoying, having the bowl cut into my thighs a bit, and not being able to rest my feet flat. Is that typical of newer toilets, that they're higher? Are people just getting taller? I don't like it. But I guess I'm going to live with it.

This room still needs anaglypta wallpaper on the bottom, but it's getting close to done otherwise. 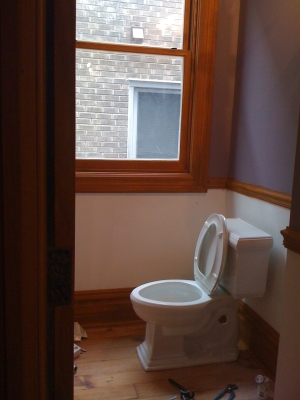 Here's the kids' bath, looking all pretty with the tile, which I love. That's the smaller hex mosaic on the bench (first pic), and the larger hexes on the floor (second pic), all from Luxe Tile. Sadly, the plumber told me today that that old pedestal is leaking, as is the old plumbing -- he can try to repair it, but no guarantees, or we can just buy new. We're waffling, as we really like that style and would have to replace with something much cheaper, and it might be difficult finding one that low too (low is good for kids and for sloping ceilings). Will need to decide soon. The toilet is leaking too, but that one he's pretty sure he can fix. 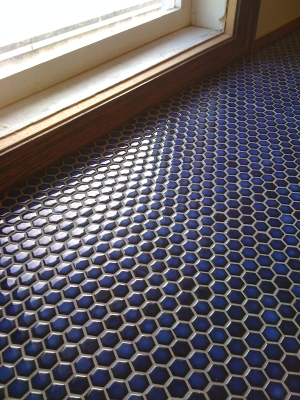 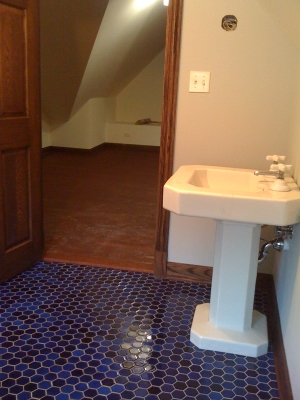 That's the kids' bath light. Cute! I think I may replace the very bright 100-watt bulb with something dimmer that lets the pattern be visible even when lit -- a 40 or 60 watt, maybe. 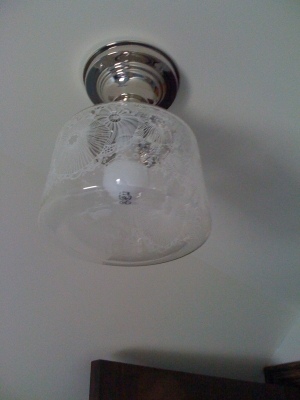 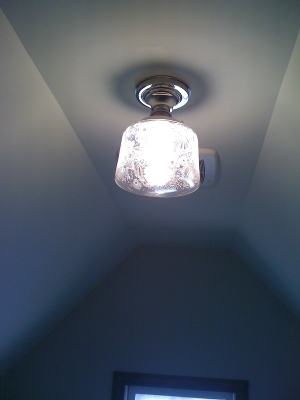 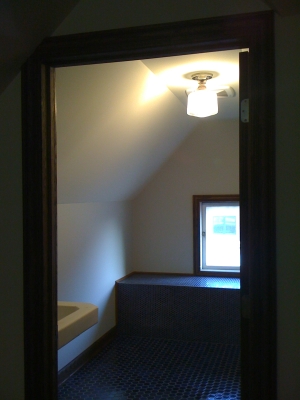 Here's that finished master vanity again, with the morning light streaming through. So pretty! Our baths really have turned out beautifully -- if only they worked that well. 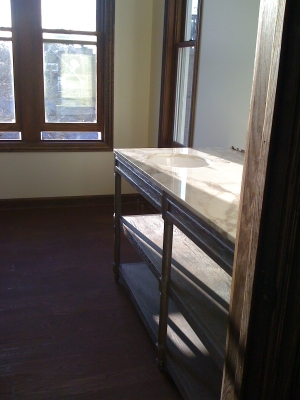 A melon ball pendant from Ballard Designs that Pam passed on to us from one of her other projects. I need to try to find coordinating sconces to go over the vanity; Ballard doesn't make one, sadly. Any suggestions? 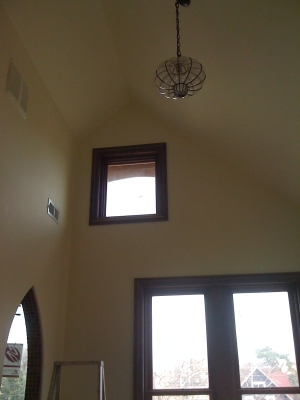 The master shower is having water pressure issues, sadly. The rain shower is working as well as can be expected -- those never have much water pressure. But the other shower head (not pictured in this particular photo) is not so good. Kev likes a lot of water pressure. I'm not sure I understood the plumber's explanation -- something to do with the width of the fittings? Kevin's going to talk to Pam, try to figure it out. Possibly buying different fixtures will address the issue? I hope so. I think these should be returnable; we'll see. 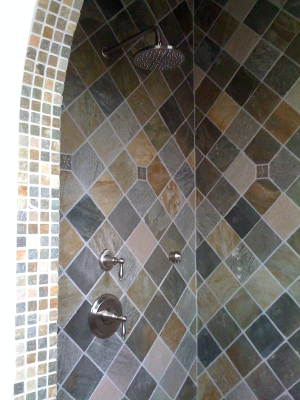 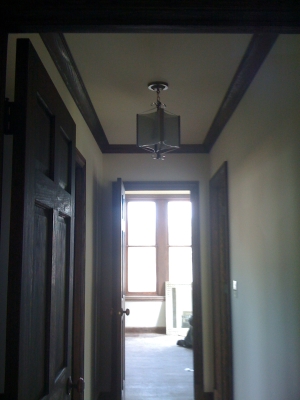 Oh, and here's one slightly unconventional thing that I'm really happy with -- the kids' rooms have glass panels in the doors. It helps light flow through the attic space, and makes it much easier to check if the baby's sleeping okay! The plan is to eventually add stained glass there by the time they're old enough to want privacy, although if you're not into stained glass, you could just use a window cling instead. Or even an interior curtain? That seems very Victorian somehow. 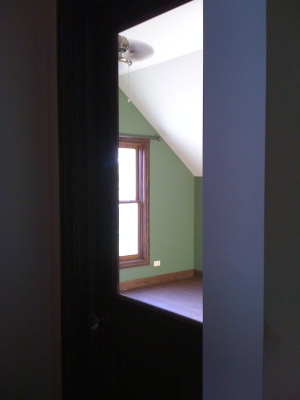 I'm not sure if I even showed you Anand's closet with the prismatic spring knobs installed. I like 'em. 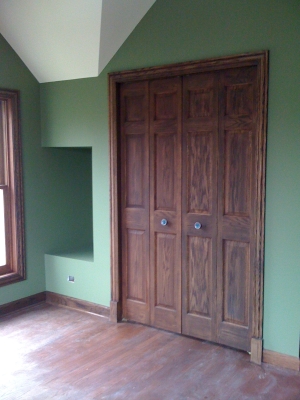 Just before move-in, I did a few things to get ready. I hung curtains in Anand's room -- what do you think? Does the cream color work okay? I need to cut and hem them, but wanted to decide if I was keeping them first. These are the Bomull from IKEA, incredibly cheap and a nice feel to the fabric. They're doubled, and still don't make the room that dark. I think that's okay -- he seems to nap all right despite some light. But I could also switch them out. Thoughts? 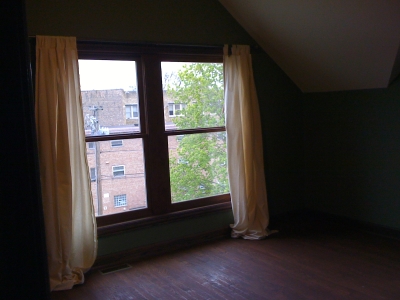 I also installed Kavi's fairy door (which she has not yet noticed)... 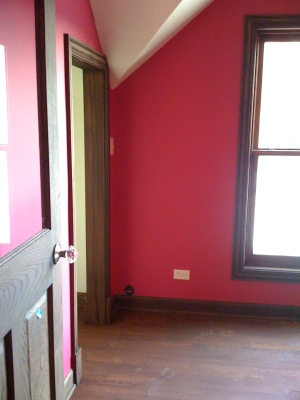 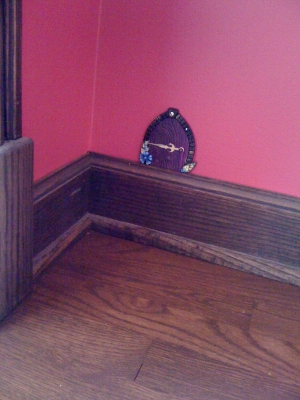 ...and brought over a pot of flowers (shooting star hydrangea). 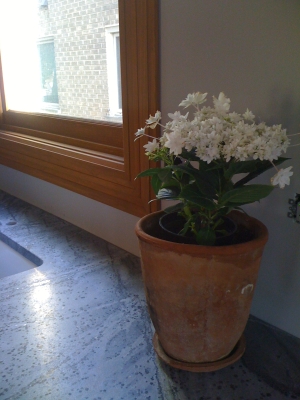 And of course, I wandered around and took some photos of the clean, empty rooms. (Only the first floor, though.) 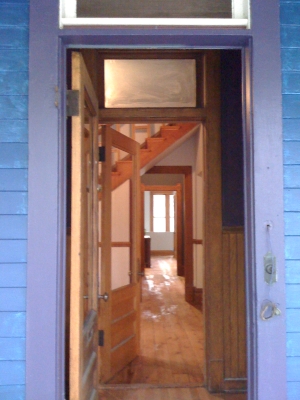 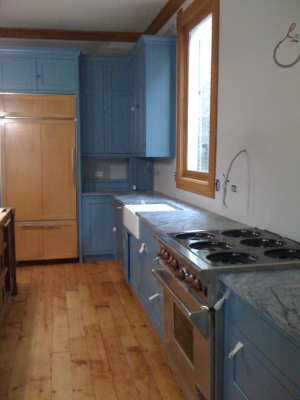 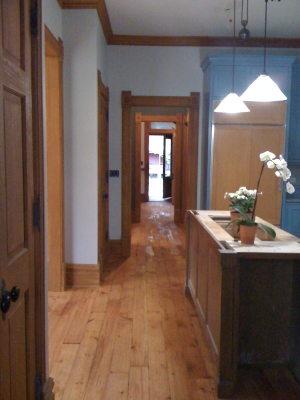 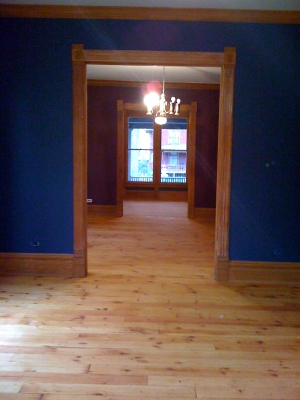 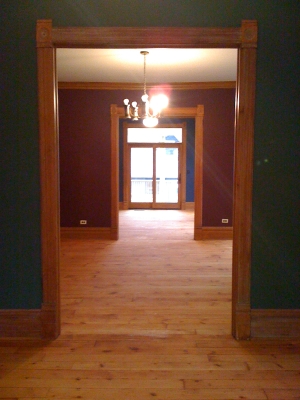 On move-in day, the main priority was getting the kids' and our beds made, so we could collapse. The actual move took from 8:30 a.m. to 6 p.m., mostly because we had a whole garage full of stuff (some of it sadly moldy after over a year in a damp garage) to move into the house too. We should have made it a priority to get everything in cardboard boxes up on flats before we put it in there -- we even thought of that, but somehow it fell off the radar. Argh. I suppose in a project this big, there are bound to be some biggish mistakes, but it's still deeply frustrating to lose books and games and clothes to lack of forethought. At least ten boxes were damaged. Sigh. 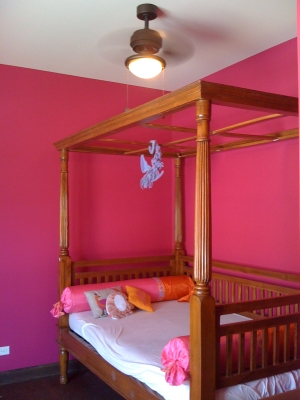 Ah well. Tea (my first priority to unpack, before even the beds) was a consolation. 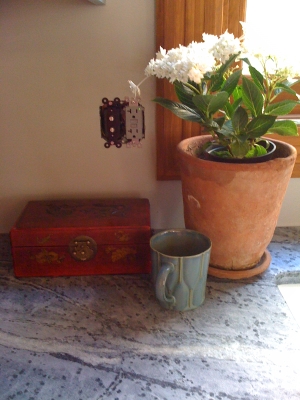 And here's a new tulip that opened to greet us on moving day. Lovely! 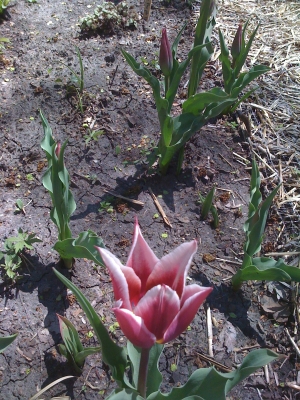