Skip to content
Oh, lord. We have to finalize our paint colors soon, and we've been asking Kavi what she wants on her walls. She wants pink and purple. Which I think means fuschia walls. In theory, I want her to be able to choose a color that makes her happy. But:

a) it's a small room, and I'm worried that it's going to feel overwhelmingly dark (though maybe that'll just feel cozy to her?)

c) all the decor so far is dark wood with rich pink and orange main notes, and turquoise and pale green accents -- I had planned to tone all that down with a pale yellow or pale green on the walls, not crank it up another notch!

Here's a pale yellow background, for example -- I love the feel of this room, very antique and Indian:

And here's one with green walls, though I was envisioning a lighter green: 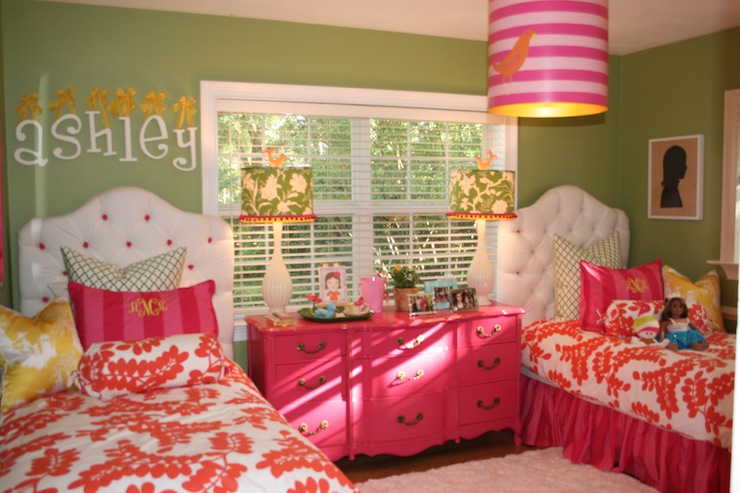 What color would you put on those walls? I'm not planning on changing the bedding for several years, so that's what you have to work with: bright pink, bright orange, bright turquoise, medium-pale green.

Here is her current bedding, to give you an idea -- sorry the lighting isn't great: 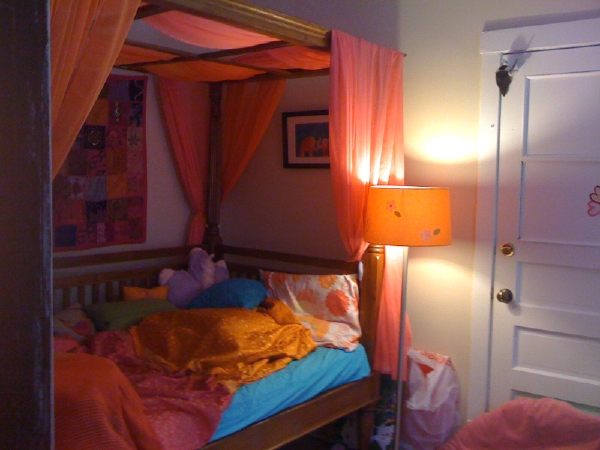 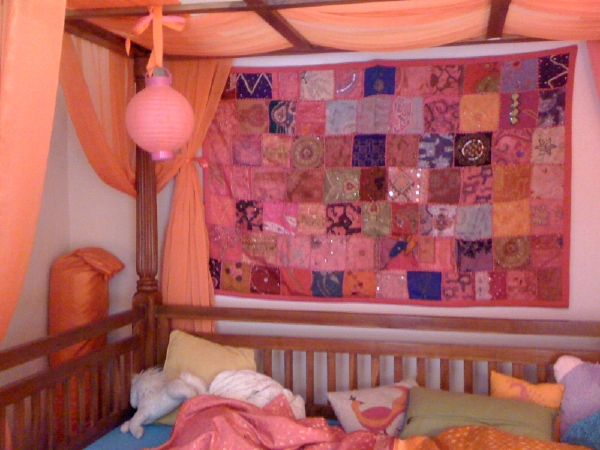 I don't currently have a good picture of the room, but it's smallish.

I'm also worried because it seems like most of the designed pink-orange rooms have a fairly modern feel, with lots of crisp white to set against the bright colors. Whereas her bed is dark wood, and in general, I'd prefer to have the room feel more Indian / vintage, and perhaps avoid crisp white entirely. Off-whites are great, though. Can I do that without it just ending up feeling dark and muddy? (Now I'm feeling like I should have gone with more muted pinks/oranges, instead of the brights -- but I didn't want pale pink or orange, just too wimpy. In retrospect, though, there's a difference between pale and muted. Sigh. Too late now, though I can update it for the teenage version of her, if she still likes these colors.)

9:30 update: I just showed her some rooms, and she said she likes this one, but wants pink and purple. Which maybe means pink and purple separately, and not mixed together? She's not so clear on this. I think this room is pretty, but a little too intense in color for my taste. 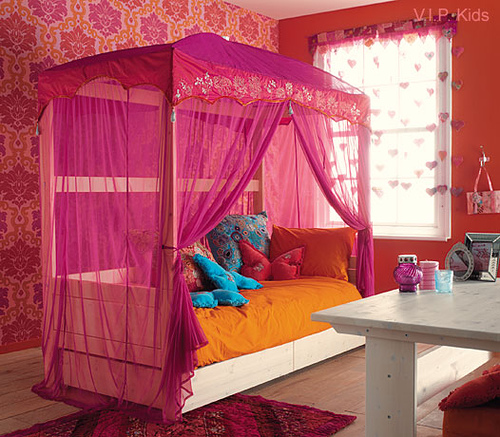 She also likes the green-walled room above, with all the bright pink furniture, so maybe I can get away with not painting the walls pink and still have her happy. Hmm...

I can't decide if I like this boys' room or not -- too dark? I can't tell if the color on the walls is brown or green or a mix. The beds are super-cool, though. I wonder if Anand wants a swing bed:

And while we're at it, what do you think I should do with these shelves? They're IKEA's Akrobat shelves, and I plan to keep using some in her room, but the beech pressboard doesn't really coordinate well with the real rosewood of her bed. So I thought I'd try to sand, prime, and paint them -- do you think that would work? And if so, what color should I do? Maybe an off-white, with a colored interior back? Or do a color, like the turquoise or pale green? (I'm worried that the latter will look super-modern again, but perhaps that can't be avoided, given the shape of the shelving unit.)