I know it's a little hard to see in this picture, but it's the best one I have of the house as we originally bought it, with the poor crabapple all bare of leaves and looking quite sad. (It's in the middle, a little to the left.) I hate taking down living trees, and we waffled over this poor tree for a long time, but I think the decision to take it out was for the best. 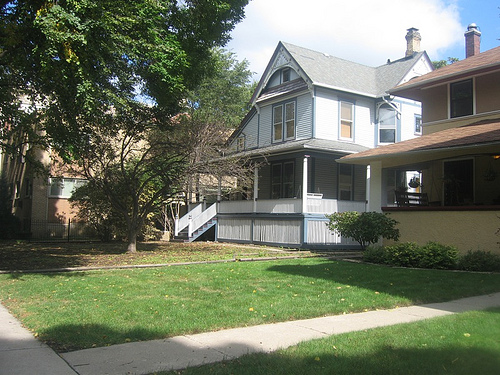 We're thinking of replacing it with another smaller tree, set a little further back and to the south side, so it gets more sun. A dwarf redbud, perhaps -- Don Egolf or Avondale or Ace of Hearts? Or maybe one of the late winter-blooming trees from that recent entry? Bodnant viburnum? Though that might be too big. I'm tempted by a dwarf cherry -- Kevin likes eating them, and I like the flowers. But I gather that you kind of need to pick based on whether you want fruit or flowers, since they're bred to emphasize one or the other. I also like Chinese dogwoods. Hmmm... Here's what we want -- 10-15 ft' mature height, somewhat shade-tolerant ideally, blooms in early spring in pink or red or white, zone 5. Suggestions welcome!

They took out the brick-like path going up to the front door, and the concrete path wrapping across the front of the house and to the back. I don't like herringbone patterns much, and red brick seemed an odd choice for our house, but we probably would have left it alone if it had wrapped all the way around. Since it didn't, it became a choice between continuing what was there, or just putting in what we actually liked. 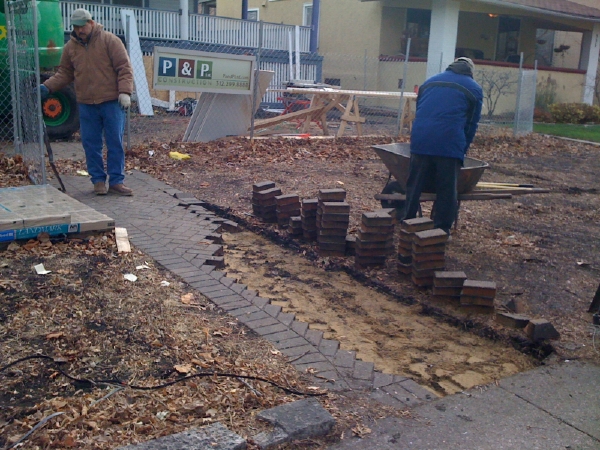 We went with Unilock Rivenstone pavers, in the Bluestone colorway, and no, it probably didn't hurt that the word 'rivenstone' sounds like it belongs in a fantasy novel. Here are the guys working on laying the new stone-like (still concrete, but prettier :-) path. 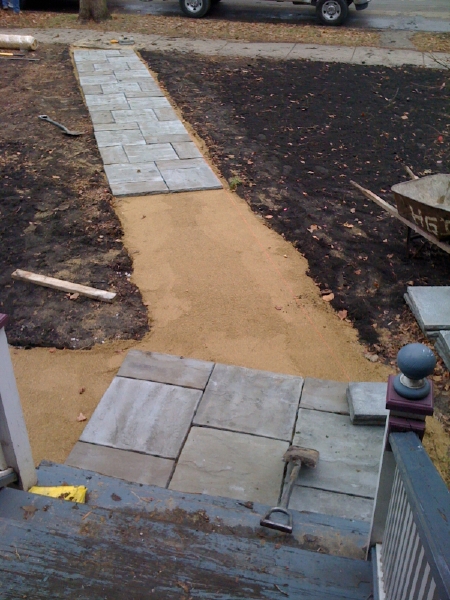 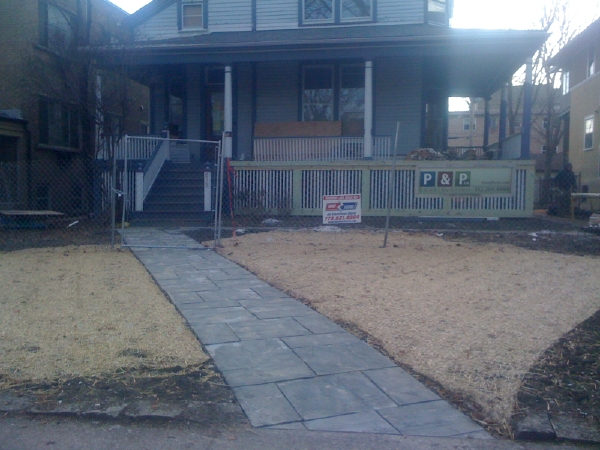 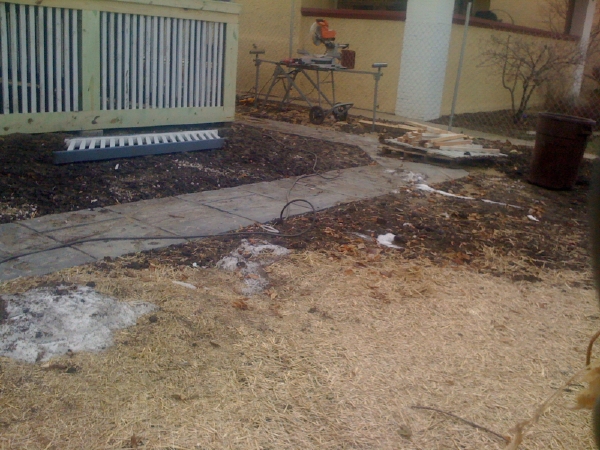 And here's Dobek and one of his guys working on repairing the rotted timbers of our porch. It's funny; we did a lot of walking on that porch before they realized just how rotted it was. Oops. Now it'll be all nice and safe. 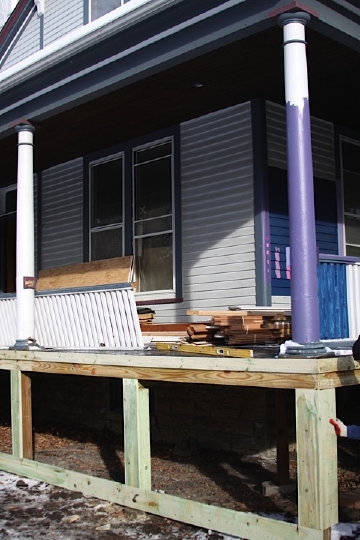 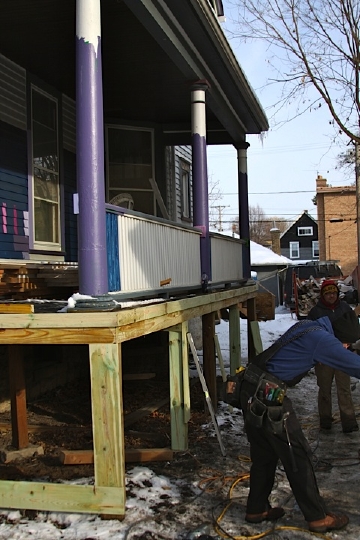 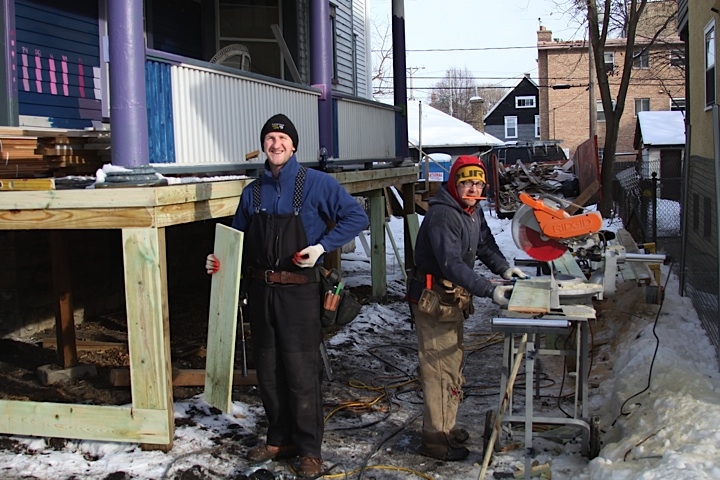 Here it is all together, with grasscloth (looks like straw) where the grass will eventually go. 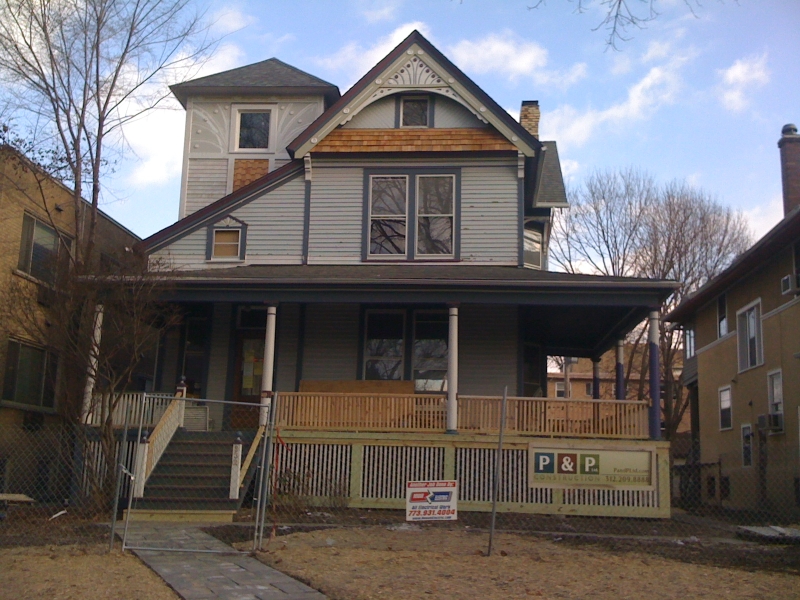 Progress! Next house entry -- the wonders of drywall.