Facebook Instagram Youtube Twitter Patreon Shopping-bag
Menu
When we first met with Tonya Maxwell, from The Landscaping Studio, I think she was a bit bewildered by my conflicting desires. I told her I liked formal English gardens, English cottage gardens, minimalist gardens, opulent gardens...umm...and I think a few more. Hm. I also wanted some grass in the front yard, but not too much grass. Mostly plants. And maybe we should try to keep the crabapple tree that was already there? And the shrubs for privacy? Poor woman.

After some discussion, she came back to us with five potential sketches, all of them aiming towards a somewhat formal structure, softened by lots of cottage-style plantings. Keep in mind when looking at these that there's a little grass in the center of each pattern, and all the border is meant to be plantings (with mulch underneath):

Of course, we decided what we liked quite a while ago. Drum roll, please...

We were tempted by #1, based off my original design ideas, which keeps the crabapple -- but as Tonya pointed out, that tree was in real trouble. It had apple scab, because it was getting pretty stressed by the shade from the parkway trees. Crabapples apparently don't make good understory trees. The tree guys we'd had out before told us that they'd charge us $600 a year to give it treatments in the spring that would hopefully keep it from losing most of its leaves by mid-summer. That seemed like a big, expensive fight for a tree that wasn't going to be happy. So we eventually, sadly, had the crabapple taken out.

We liked aspects of all the others, I think, especially #3 & #4, but in the end, we went with #5. Here's the planting plan for the spring (or rather, as we can afford it). This is all subject to change, but is a basic idea of what we're going for. The little diamond is the grass. 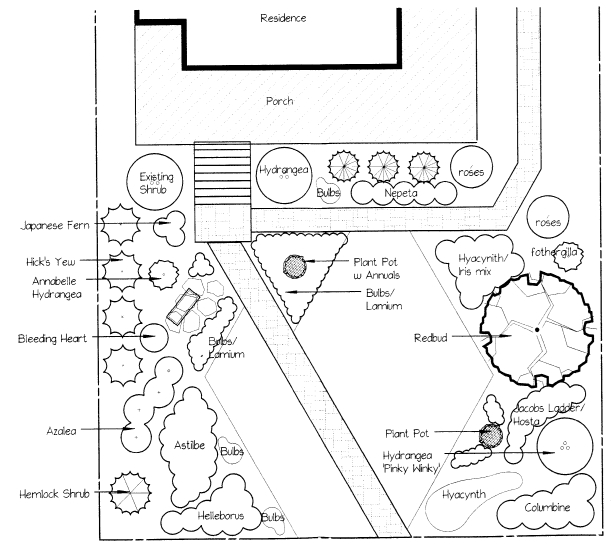 So far, we've taken out the crabapple and most of the overgrown shrubs (saving only the 100-yr-old burning bush right next to the porch). The shrubs were only flowering way up high, due again to the shade. Sad. And we've taken out the brick-like herringbone path, as well as the concrete path across the front of the house and to the back, and replaced it with a slate-like stone path. Real slate would have been lovely, but was outside our budget. So far, we like the shape it's taking. We also put in all those bulbs I bought last summer -- hopefully we'll get some spring color. Exciting!

Next entry -- before and after photos!

2 thoughts on “When we first met with…”