Facebook Instagram Youtube Twitter Patreon Shopping-bag
Menu
We had mostly a pretty quiet weekend, resting and reading and watching kids and cleaning. I caught up on my tv, which I'd fallen badly behind on. The only real activity was going out to Zoya and Zain's birthday party in Naperville. Naperville is only 20 miles away, but somehow, it feels far. Which is too bad, because I like Z&Z's parents (Huzefa and Fatima) a lot. Sigh. They may not be staying out there, so we'll see if we can coax them over to Oak Park or Forest Park, perhaps. And we met another nice couple at the party with a little boy a few months younger than Anand; they're thinking of Oak Park too. I'm feeling quite acquisitive about potential friends these days, but we'll just have to wait and see what happens.

Unfortunately, the party was right during Kavi's regular nap time (a typical hazard of scheduling parties for small children, as it's always someone's nap time), so she was a horrible crankypuss. Also, it was a dance party, which I thought she'd love, but I'd forgotten that she doesn't like loud noises, and it was quite loud. Oh well. She mostly hung out with Kevin in the other room. Anand liked the music, though. He didn't really understand the dancing instructions, of course, but he was fascinated by the whole process. And he loved his noisemaker too, though not for its intended purpose. 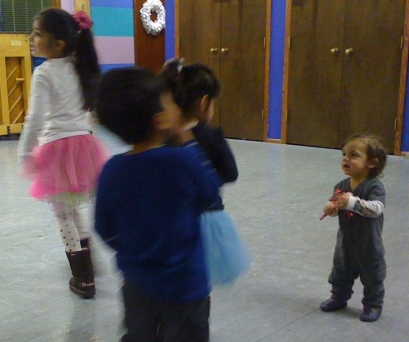 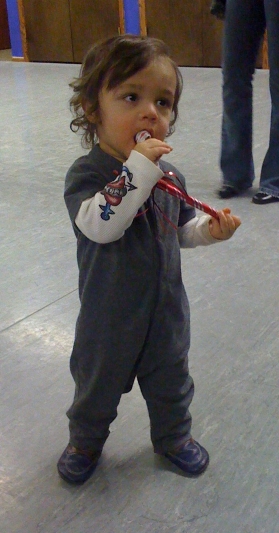 Most of the folks at the party was S. Asian (or mixed-race couples). It feels important to me to take the children into those settings as much as we can, given that most of their regular life, they're surrounded by mostly white folks. Even though Oak Park tries hard to be racially diverse, they're still mostly (69%) white. "Oak Park has a long history of encouraging and maintaining racial and ethnic diversity, much of which was started in conjunction with the 1966 Chicago Open Housing Movement. The village operates a Diversity Assurance Program within its housing programs department to ensure a stable, diverse, and integrated population." 69% isn't bad, but most of the African American people live further away from the center of town (where we are), and the Asian population is still quite small (4%).

The two-thirds whiteness wouldn't be as big a deal if my family lived nearby, but they're on the East Coast -- an influx of brown people once or twice a year doesn't feel like enough. At one point in the party, someone was calling out, "Amma!" and Kavi was really confused -- she wanted to know who was calling her amma. It was the first time she'd heard anyone else use the term.

I'm glad our neighbors Ron and Liz are a mixed race couple too -- Liz is Hispanic (although now I'm forgetting from which country, oops). Although she's still fairly light-skinned, so I doubt the kids will notice. Still, I think it makes a difference. When we were house-hunting, I felt really strongly that I didn't want to end up in a majority white neighborhood. While I didn't have a lot of trouble with racism growing up, I was lucky, I think. I've heard plenty of awful stories from brown friends of mine who went to school with only white kids.

Of course, my kids are much more light-skinned than I am; they can pass for white. Their race issues won't be the same as mine, and I'm not sure I even know yet what their issues will be. But I think making sure they grow up comfortable with and familiar with brown people should be a priority. The kids at their pre-school are all different ethnic backgrounds and different colors, which I'm really pleased about.

1 thought on “We had mostly a pretty…”