Facebook Instagram Youtube Twitter Patreon Shopping-bag
Menu
Yesterday, we took the children for a walk and train ride after naptime -- Kavi loves riding the train, and even though it's just four blocks from the Harlem to the Oak Park stop, that's plenty of train to make her happy. And Anand just gets bored and wants to go out; he doesn't care where. OUT!

If you don't take him out, he turns into an evil gremlin, as pictured in photo #2, where he has just grabbed his sister's nose. Luckily, she doesn't mind too much. 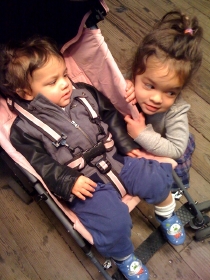 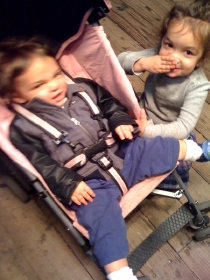 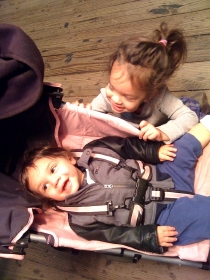 We stopped at Divine Consign, a local consignment shop that we've been checking out periodically -- they often have pretty good deals, and they churn through their supply fairly quickly. We're going to be severely short of furniture when we move into the new house, and I expect some rooms to be mostly empty for several months (or years). Which is okay.

But it won't be quite as empty as I thought, because I totally fell in love with this chair: 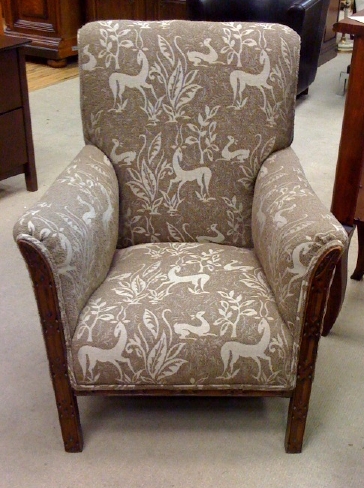 Just $133!! If it were new, I wouldn't be surprised to see it listed at a fancy store for ten times that. Admittedly, it could use reupholstering to pad it out a bit in the seat, but I can totally sit in it as is. And I adore the carving on the arms, and the deer print. 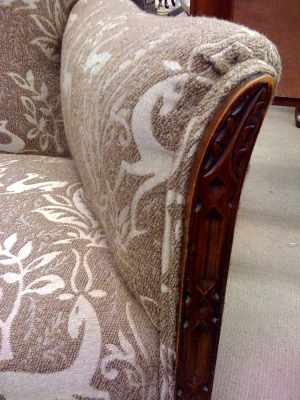 Kev asked which room it would go in, and I pointed out that, given the neutral color, it could go in several rooms -- my study, the library, the music room / front parlor, even our bedroom. I'm leaning towards the front parlor, assuming I can find other pieces that work with it eventually. But mostly, I just love it. Deer! So fabulously medieval! And yet they also remind me of the sambar deer that Karina and I saw at World's End in Sri Lanka. The mostly-tame one was named Raja. I might have to name the chair Raja too. :-)

And the rising of the sun
And the running of the deer
The playing of the merry organ
Sweet singing in the choir!

I think it might have to go in the music room, with the organ (piano).