Facebook Instagram Youtube Twitter Patreon Shopping-bag
Menu
This is the tile I found yesterday at The Great Indoors, hopefully for the guest shower enclosure (we've decided to skip tub entirely for accessibility reasons, so this will be a 3' x 5' shower enclosure, with a large window in the wide wall): 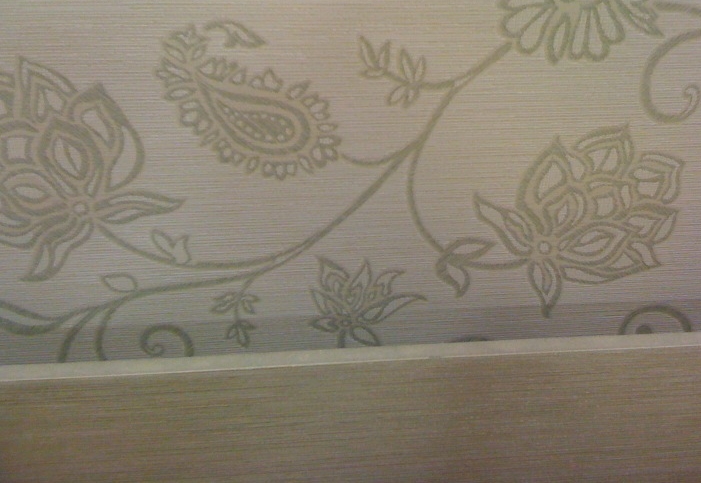 That's actually two tiles; the lower one is in a complementary taupe color and is very simple, so you could combine them if you wanted. The pattern is a few dollars more per square foot. ($13 vs. $10, roughly). They both have a really nice texture to them, which you can see if you peer closely; subtly ridged. I was worried that Kev might think it too flowery, but he actually likes it. The bathroom is so small (barely 5' x 8' total), I'd hoped to do something Victorian-appropriate, but also bright and light. I think this might be exactly it -- if the Victorians had had access to tile that looked like wallpaper, I suspect they would have been all over it! And of course I love that it has a desi flavor.

So now it's just a question of what the budget will allow. We're waiting for final numbers from Pam on a set of unexpected expenses (chimney repair, siding repair), as well as costs for potential built-ins (library shelving). Once we have those numbers, we can make final decisions on tile.

One practicality question? We had thought of doing just a hanging shower curtain -- that way you can pull it all the way aside and have full view of the tall window most of the time, rather than having it hidden behind glass doors. We'd have much better light in that bathroom most of the time, and I think it would also look prettier. But is that practical with a shower enclosure and no tub? Do we bring the front edge of the enclosure up more than just a little lip? How much higher should it come? We still want it low enough to be very easy for elderly folks to step into. (Our parents are heading towards elderly, and so are we and our friends, albeit more slowly.) Do I just make sure the shower curtain comes down a good inch or two lower than wherever the top of the lip is? Will that be sufficient? Help!

Update: Some more pics from the web:

Their Venezia line is also lovely, with a metallic pattern, but a bit glitzier than we want to use:

7 thoughts on “This is the tile I found…”