Facebook Instagram Youtube Twitter Patreon Shopping-bag
Menu
Okay, I'm a little embarrassed by how much they cost, but I love the octopus hooks I bought for the kids' bathroom (Anthropologie). They make me smile every time I look at them. I was going to get just one, but then I decided that was just asking for mayhem when the two of them get bigger. So they each have their own fabulously cool towel hook. Now I have to do that octopus mural... 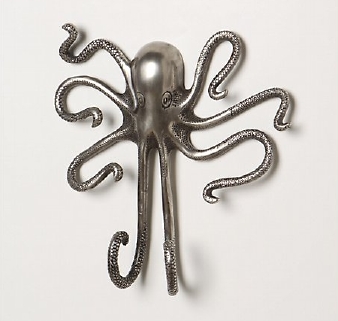 The fixtures are white (and came with the house) -- toilet, clawfoot bathtub, pedestal sink. I'd planned to paint the octopus in blues and purples on the wall. Although maybe paint the walls in blue? I had a cobalt blue bathroom once, and I loved it; I think kids would like it too. I know a lot of people would think that a bit intense, though. Hmm...maybe blue below a chair rail (contrasting with the white fixtures) and white above? But I don't like painting chair rails white, and brown wood would be weird in this bathroom, I think -- it doesn't have any other wood.

Votes? Other brainstorming thoughts welcome too. :-) I want the kids' bath to be cheerful and fun, with maybe a feeling of being underwater and in Nemo's submarine. I don't think there's much point in trying to be too elegant or restrained in here, given that all kids' bath toys seem to be in super-bright colors, and made of plastic or rubber. But I also don't want it too cutesy -- ideally, the tile should be something they can live with until they leave for college. (I'm willing to repaint the walls in ten years if they decide they hate the paint color.)

And while we're on the subject, I need to go and check, but I think two clawfoot bathtubs came with the house. If that's the case, and given that they cost $1500-$2000, I'd planned to use both of them -- one in the kids' bath, and one in the master. But Kevin is worried that the extra height of the clawfoot will make it extra hard on kids getting in and out, and make it more likely that they'll slip getting out of the tub and crack their heads on the tub or the tile. Thoughts? If we do have a clawfoot there currently, do you think it's worth replacing it (keeping in mind that we may not be able to get much if anything for it)?

Obviously, I don't want to stint on the cost of a new tub, if the clawfoot is actually a hazard for small kids, but at the same time, I know how much I would have loved a clawfoot as a kid myself...