I made this Toddler Scarflette last summer, while staying at Daniel and Anne's, and it was a quick, sweet little crochet project, which I recommend for any toddlers you know. It's a clever pattern where one end folds over itself, to make a sort of loop that you can insert the other end into, making it much harder for a gamboling child to drop and lose the scarf you so lovingly made. Recommended! The yarns are Malabrigo Cabernet and Chestnut, and I think they're very beautiful colors, but maybe a little somber for a toddler. Oh well -- they go with her coat, and are gender neutral enough for Anand to wear too, should they survive so long. 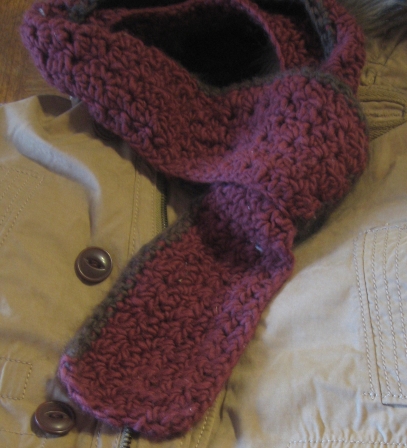 So far, so good. I had planned to do a scarf, mittens, and an acorn hat, all with an oak color scheme and theme, a way of celebrating our move to Oak Park.

I knit a beautiful oak leaf in Malabrigo Olive, pattern from Nicky Epstein's Knitted Embellishments, which was time-consuming but satisfying. I like the holes in the pattern -- makes it look more real, like veining. Very elegant result. 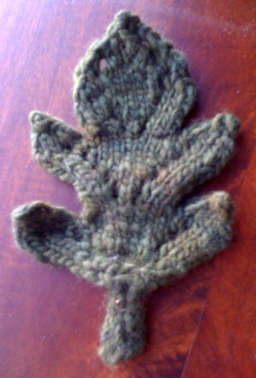 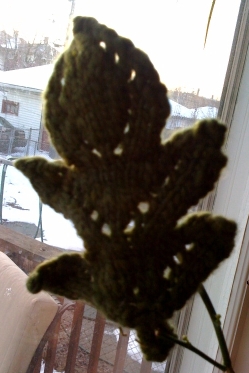 Unfortunately, it ended up too big for anything I wanted to use -- I thought maybe I could attach it to a sweater or coat at some point. Although it's also a little grown-up in appearance; maybe I'll save it to sew on to a skirt of my own. It'd look nice on a brown knit skirt, something simple and A-line. I also knitted a tiny yarn acorn, but couldn't figure out a good place to attach that either. So I started on the mittens next, thinking I'd figure out the embellishments when the main pieces were done.

I'm not positive which pattern I used -- it might have been this one. I can't recommend it, because they came out much too small for Kavi. I was frustrated, but willing to chalk it up to bad judgement on my part; I hadn't made mittens with thumbs before. So I tried again, sort of freestyling the pattern, expanding the size. The finished version was a little funny-looking, but definitely bigger. 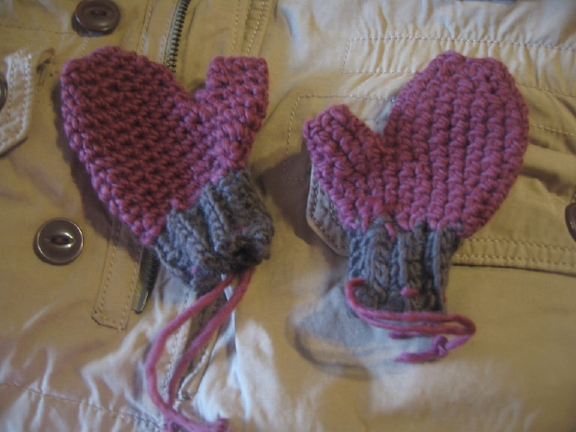 She can wear these, but they're still not great. Still a smidge too small, and a strange, tight join to the thumb. Plus, they don't quite match each other. In retrospect, I don't think Kavi really needs thumbs on her mittens yet; as long as the yarn is soft enough, she can grab hands and such just fine without thumbs. We'll keep using these, since I made them, but it did frustrate me enough that I didn't have the heart to get started on the acorn hat. Next fall, I suppose. Chalk this one up to a learning experience.

2 thoughts on “Sometimes my crafty…”