This part is very hard.

What's worst is that you're not doing anything particularly wrong. Kavya, you're toilet training, and you're doing okay at it, which means we're only doing about twice as much laundry as normal. The less said about that, the better, I think. Anandan, you're mostly sleeping at night, which is in theory good, but you're still waking up and wanting milk (and sometimes carrying for a bit) several times a night, so it's not at all the same as actually sleeping through the night. And since you're doing most of your sleeping at night, we don't get so much of a break from you during the day either. At 4.5 months, you want to be actively played with most of the time, and you complain mightily if we don't comply. It's certainly possible to play with both you and Kavi at the same time, but it takes effort and energy and a bit of luck. And it's then pretty impossible to check e-mail or watch tv or do anything else at the same time; our multi-tasking days are behind us, I fear.

It's not that you're bad children. You're very good children. Sweet and adorable and cuddly and funny, doing exactly what you're supposed to be doing. Several times a day, if not several times an hour, you remind us why we had you, why we're glad we did. Which is very good for you, because dear, darling, children, our rasa and rasathi -- your mommy and daddy are reaching their limits.

I can't speak for your dad's reasons, but for me, I think it's the exquisite anguish of actually being able to see my old life, and yet having it be so firmly out of reach. The first three months with you, Anand, I didn't expect to be able to accomplish much of anything. I was pleased with myself if I managed to shower once a day. I was ecstatic if I got an hour of work done. Mostly, we were in intense survival mode, and hey, we survived, all four of us. (Ellie too, though thinner than she was before you arrived.) We even survived when when I went back to work after just three weeks of maternity leave, though a goodly amount of credit for our survival then goes to our nanny. When Jarmila realized just how frayed and falling apart we were, she started doing our dishes every day, and sometimes our laundry (not just the kids'), which is definitely not within her job description. She was working thirty-five hours a week for us and going to grad school in the evenings, but we were just that pathetic -- our nanny felt sorry for us.

Still, to be expected, right? Survival mode. But then Anand, you started sleeping a little more at night. We started doing our own dishes. At three months, I started to hope that things would go back to normal soon. I even had the audacity to sign up for a stained glass class, thinking that surely I could manage five Wednesday evenings from seven to nine. As it turns out, no. I've missed two out of four classes so far, because I was just too exhausted to leave the house. There just isn't enough energy, or enough time.

These are the things that can't be compromised:

These are the things that mostly get crammed into the time that's left: This is what gets completely neglected: A few days ago, I got so angry at your father, for something totally minor, that I slammed the front door, really hard, on my way out to knitting group. I never slam doors. Your dad and I basically never fight -- in almost eighteen years, we've raised our voices maybe four or five times? But this past month, I've had to bite my tongue to keep from biting his head off pretty much every day. I swear at him all the time in my mind, and it only stays in my mind because I know he doesn't deserve it. Because as exhausted as he is, he's doing his best to carry his share of the load. We're managing to get everything done that has to be done, just barely. We just don't have any energy left over for each other.

I'm so tired of being a parent sometimes. I want to just be me again. Me and him and Ellie, in our comfortable condo, two DINKs (double-income-no-kids) with plenty of time to read and work and play games and relax. We used to play poker with our friends. We used to host dinner parties. We used to sleep in. Gods.

Which doesn't mean I'm sorry we had you, either of you. I'm still absolutely sure we made the right decision, choosing to have kids. The right decision for us. It's much harder than I expected, and I do think some people must have an easier time with it -- kids who sleep through the night at three months; instinctive breastfeeding with accompanying endorphin high, etc. It makes me crazy, thinking about those people, and how my fuzzy warm ideas of parenting were shaped by the stories from people like them. But I know some people have a harder time too -- colicky screaming, angry toddlers who do a lot of destructive acting out, etc. We got lucky, I know. It could have been a lot worse. It's just hard to remember that.

I'm too tired to come up with a sweet, coherent end to this letter. Right now, Anand, I'm glad that you finally fell asleep in your swing, only five minutes after I put you, screaming, in there, and walked away because I just couldn't take it anymore. I knew you were tired, little boy, and you just refused to go to sleep. I didn't know what else to do, because after five hours of sleep and a full day of teaching, I just couldn't carry you around anymore. Thank god you fell asleep quickly. And Kavya, you have figured out how to get the multigrain crackers out of the pantry, and I am so grateful, because you have decided to feed yourself and Ellie a dinner of crackers tonight. While normally I try to make sure you get a vegetable at dinner, tonight, you feeding yourself something vaguely nutritious is a bloody miracle.

Now you're watching tv quite contentedly, and I, I am going to wrap myself in a blanket and pray that this peace continues until your daddy finishes teaching. At 8 p.m. I'll drag myself up and make the dinner I promised him, steak and potatoes and green beans, although if it ends up just being steak he'll forgive me. So that when he walks in the door at 8:30, there will be some kind of dinner waiting for him, and if he's lucky, maybe he'll even get a quick hug before I hand the two of you off to him and go crashing up to bed.

Let's all just hang in a little longer. It has to get better soon. 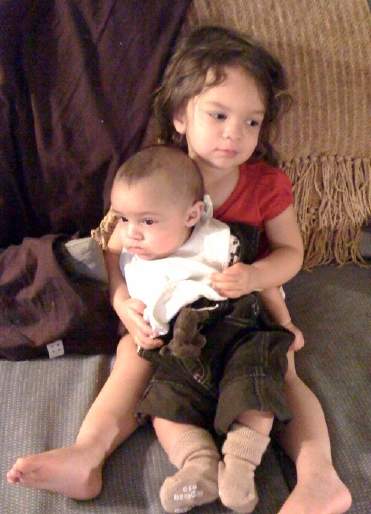 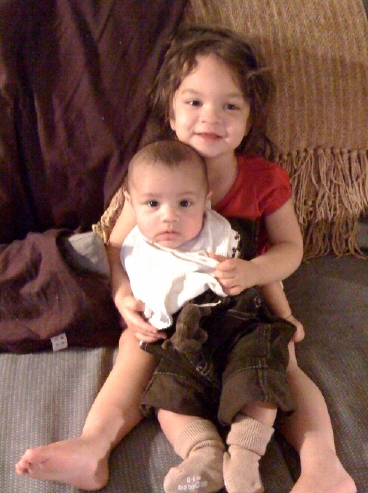 5 thoughts on “Dear Children, This…”