Facebook Instagram Youtube Twitter Patreon Shopping-bag
Menu
I have to say, I'm really feeling pleased with my yarn-prosletyzing lately. I saw Simone last week, and we did some crocheting together at a cafe; I saw Lori recently, wearing a cute double-ruffle tea scarf she crocheted. Both of them knew how to crochet before me, but I helped talk them into picking it up again. (I think mostly with the adorableness of amigurumi, since they have little ones to make toys for.)

And then at the show on Saturday, Nikhil showed up wearing a beautiful hat he'd crocheted -- he asked me last summer to teach him how to crochet, and he came by for an hour and I showed him stuff, and I didn't know if he'd really follow up with it, but he apparently did, making not only a hat for himself, but holiday gift hats for his nieces, and I think he said something about also making them some legwarmers on the plane. Woohoo! And now Venu wants to learn, so I'm hoping to teach her next week.

It's incredibly satisfying to pass these skills on, and so easy -- I can teach someone enough crochet to get them going on a scarf in about an hour. I haven't tried teaching knitting yet, but I think that would take 2-3 hours. And once they have that, they're basically good to go, and can make all sorts of fabulous things for themselves, relatives, friends. Yay!

In theory, I could also teach the basics of stained glass, bookmaking, candle-making, collage, acrylic painting, glass etching, etc. and so on, because I am a craft addict. But yarn is easy, portable, inexpensive (if you're careful and don't indulge in the fancy ones), and super useful for day-to-day life -- I think the only thing that might be better for me to teach folks is basic cooking skills, and most of my friends do have those already.

Anyway, I guess this is my way of saying I like teaching yarn. Little effort, high reward. Maybe I need to offer a basic crochet class? I wouldn't charge for it, because really, the basics are so easy. (I learned from a book.) We'd just need people to bring their own supplies -- about $5 worth of crochet hook and yarn. I wonder how many of my friends would be interested in coming by Oak Park some weekend soon to learn? I think I could reasonably teach 3-5 people at a time; more if Lori or Simone came by to help teach. :-)

And hmm....I wonder if people would like to do that at WisCon? I bet we could get a lot of other folks teaching too... Programming suggestions are in theory closed, but I'm going to go ahead and send them a note. Maybe at the Gathering at least, if not an actual panel. 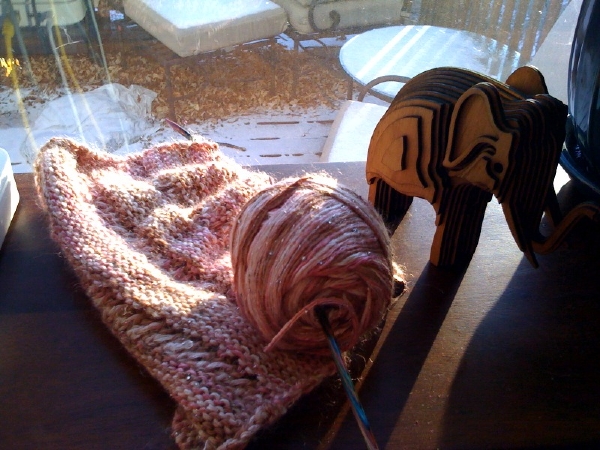