Thursday morning at 9 a.m., we were supposed to do the inspection on our hopefully new house. Wednesday night, we got a call around 9:30 p.m. from our realtor, saying that the Elmwood owners wanted an extension of attorney review through to Monday and didn't want to let us do the inspection otherwise. We were kind of bewildered and worried, because we'd already agreed to extend through Friday, and didn't know why they'd be requesting the extra days, unless it was because they were hoping to get out of the contract. But we said tentatively okay to our agent, but also that we couldn't agree to anything officially because our lawyer wouldn't be in the office before our inspection was supposed to start. We didn't hear anything more, so assumed we were okay.

As it turned out afterwards, there were multiple communication breakdowns along the line -- among other things, our lawyer's son had had seizures in daycare on Wednesday, and she'd had to rush him to the E.R. (he's fine now, but scary!), so various documents got faxed over late by her paralegal, etc. and so on. The Elmwood folks hadn't heard about our agreeing to the extension to Friday, among other things that got lost in transit. So it's not so surprising that there was mass confusion all around the next morning, but this wasn't clear to any of us at the time. Stressful.

Thursday morning at 9 a.m., we met our inspector at the house for the inspection, only to find that a) the homeowners were there and had thought we were coming at 10 a.m. (despite my kazillion e-mails on the subject saying 9 a.m., none of which they saw), and b) they still hadn't been able to get in touch with their lawyer and were worried about letting us do the inspection. We got partway through the exterior and basement inspection before they asked us to leave. Then followed a somewhat tense conversation where we tried to convince them that it didn't bind them to anything to let us finish the inspection. They finally reached their lawyer, and were reassured that they were fine, but by that point, our inspector was recommending that we just wait and sort all this out and then come back. He said he'd credit us for the cost of the inspection so far, whether we finished it on this house, or ended up having him inspect a different house. So we ended up going home, and telling them they could have an extension on attorney review, as they'd asked.

I'm not sure what the point of it all was, to be honest. I guess it gave them a few more days to try to sort out their home purchase with the option of backing out if they couldn't make it happen. And since our buyers still don't have their mortgage and have requested another one-week extension (but still our agents and theirs assure us that it's going to happen, and it's just a matter of their mortgage broker finishing processing all the paperwork on our condo), it's not as if we aren't swimming in a sea of uncertainty anyway.

At this point, it still seems likely that it's all going to happen, at least if we can believe what everyone is telling us. I was reassured to see that the Elmwood folks were actually packing; it seems like they're at least planning to sell us their lovely house. But this is all utterly nerve-wracking. (For them too, I'm sure.) It's looking like nothing's going to get finalized until this coming Friday 7/24. And our buyers are still adamant on closing on 7/30, which means that we really do have to go ahead and pack now, since we're not really up to doing more than half a room or so a day. I'm trying to organize things so that we're packing non-essentials as much as possible first; we did our china, for example. And all the paintings and photos are down off the walls. The books are packed away, and the place is starting to look very barren. But there are still a multitude of possibilities in play:

This process is insane.

My mother keeps telling me not to stress, it's bad for the baby. Which is all well and good, but she has no advice on exactly how I'm supposed to not stress.

In the interim, we're trying to at least research some of the furniture we'll need -- although of course, we can't buy any of it yet. Which means that we'll probably be at least a month without couches, since it takes a while to deliver them once you order them. (Our current massive sectional doesn't fit in the Elmwood house, so we're selling it and hopefully buying some nice smaller pieces). Lots of sitting on the floor to watch tv in August and September. Fun when you're eight months pregnant, I'm sure.

Kev and I went to Walter E. Smith yesterday and sat on a lot of couches. It felt good to be actually doing something semi-productive, at least in theory. I think I've figured out some of what I want in a couch: about 36 inches deep, not too mushy, not overstuffed. Turned legs if possible, although that's not so important. And I have fallen a little bit in love with this dresser (the Elmwood house is severely lacking in closets, as are most old Oak Park houses, so we're going to be in need of various dressers and other storage pieces). Is it too much? Can you picture this Indian hammered silver-metal dresser in our converted attic bedroom? With a light gold lower wall (up to about 4' high) and then not too high cathedral ceilings in an off-white (probably 'bone' or some such)? And maybe some other medium-dark wood Indian pieces? 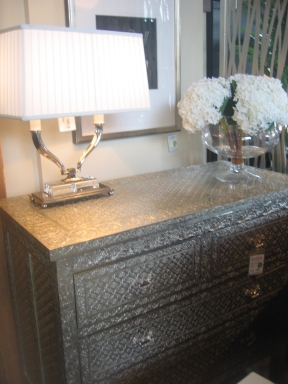 This isn't the same dresser, but it's a better photo of another one in a very similar style; inlaid hammered metal foil over mango wood, and lets you see how shimmery it actually is. Oh wait -- here's the actual chest, complete with annoying watermark.

The accent colors will change seasonally, because I'm painfully obsessive that way and already have four different sets of bedding (light blue and aqua in summer, chocolate brown in autumn, deep red and gold in Christmas/winter, light green in spring). Yes, I know, very Martha Stewart. I can't help it.

We also stopped at Pottery Barn Kids and figured out that instead of buying an actual canopy bed, we'd rather buy a hanging canopy kit like this one. This has a couple advantages: a) it lets us get exactly the bed we want, instead of being tied to a few limited possibilities for actual canopy beds, b) it should be fairly easy to just add the pink and orange fabric I bought over the current white sheers, giving a nice structure to the canopy, c) if she gets tired of having a canopy on her bed at some point, we can easily move it to the playroom, and d) because it's only half the length of the bed, it won't take up quite so much of the room in terms of visual impact -- that bright orange/pink is going to be pretty intense as it is, and pulling it back a bit should be a good thing, I think. Kavi should still be able to hide in her bed quite nicely when she wants to. :-)

Oh, and for those really curious (mostly our family members), the Flickr set of house photos below is now expanded with a bunch more photos of the yard and partially-converted basement. We think there's room for converting one more section of basement into a small separate guest room, although that project is probably five years of saving up away.